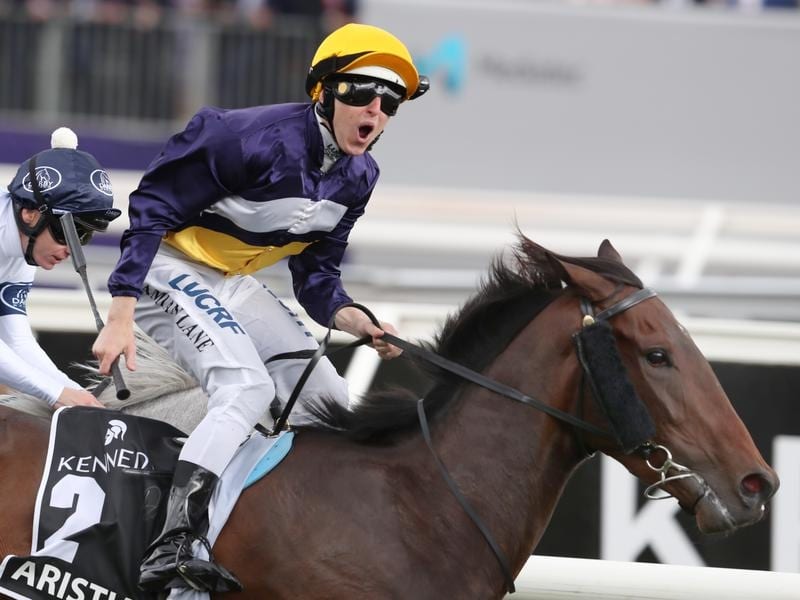 Simon Zahra says Aristia’s VRC Oaks win might turn out to be a defining moment in a training partnership with his cousin Mathew Ellerton.

Zahra couldn’t hide his delight at landing a first major staying victory in the three-year-old fillies Classic at Flemington on Thursday.

“Getting a staying Group One under our belt is probably more important than anything,” Zahra said.

“It proves to a lot of people that we can train stayers if we get the right horses.

“We’ve been pin-pointed as sprinter-miler type trainers and when people buy stayers, even overseas, they don’t think of us.

Stayers have been hard to come by for Ellerton and Zahra with Aristia their second only Oaks runner having finished third previously with Solicit in 2013.

Zahra said their only previous Derby runner was “about five years ago” and they’d never had a Melbourne Cup starter.

Now Zahra is hoping to open the stable door to more horses.

“If we can get a few more numbers in the door I’m sure we can be competitive,” Zahra said.

“We’ve got 55 in work, sometimes 60, but to compete with the big stables you need a huge turnover.

“Mathew and I are hands on and want to keep it that way.”

Aristia raced her way into Oaks calculations with victory in the Wakeful Stakes last Saturday and became the 36th, but first since Kirramosa in 2013, to claim the Wakeful and Oaks double.

The filly was originally aiming towards last month’s Thousand Guineas at Caulfield but after contesting the Prelude in September the trainers selected a different path.

“We had to give her a six-day back up after the Thousand Guineas Prelude to get her on the Ethereal and Wakeful path,” Zahra said.

“It wasn’t ideal but in the end it didn’t hurt and it might have been a blessing.”

Lane described Thursday’s win as his biggest thrill in racing having been associated with Ellerton and Zahra since arriving from Perth.

“When I moved to Melbourne I lived in Matty’s home for the first six or seven months,” Lane said.

“He’s always treated me like a family member. He always took care of me and I will always appreciate that.”