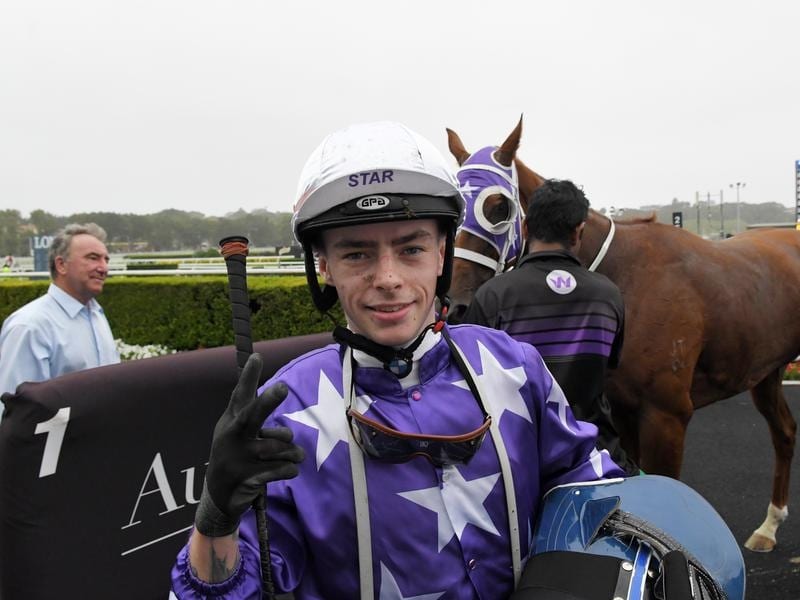 Rising star Robbie Dolan has taken another major step in his blossoming career with his first winner for Chris Waller at his first ride for Sydney’s premier trainer.

The 22-year-old Irishman began riding in his homeland before coming to Australia two years ago looking for more opportunities.

He was riding work for trainer John Sadler in Melbourne, hoping it would lead to an apprenticeship.

He was rejected by Racing Victoria but welcomed in NSW where he is sponsored by trainer Mark Newnham.

On Saturday he backed up a win on the Joe Pride-trained Easy Eddie with victory on Gresham for Waller.

His win on Easy Eddie came with a minimum of fuss but he had to fight harder for victory on Gresham ($2.15 fav) who went head and head with Sir Plush ($6.50) in the Open Handicap (1550m) before gaining the advantage by a head.

Dolan has a three-kilogram claim and the advantage of being able to use all of it on Gresham who got into the race with 49kg.

“It was a good choice of rider with the light weight,” Waller said.

“He didn’t go around a horse, stuck to the fence, the shortest way home. Well done to the young man aboard.”

Dolan’s double took him to 11 metropolitan wins this season, seven behind Waller’s stable apprentice Sam Weatherley who rode Sweet Scandal to win for his boss at Saturday’s meeting on the Kensington track and added another on Mercurial Lad for the Joseph/Jones stable.

But Dolan is a clear leader among the junior riders for the state title, having now posted 40 wins in NSW.

He said he had a good run in the race on Gresham.

“He cruised behind them and I had a beautiful run,” he said.

“He fought hard at the end.”

He admitted his earlier victory on Easy Eddie was a little smoother ahead of the four-year-old’s tilt at Listed company in the Takeover Target Stakes at Gosford.

“He was in behind the leader, then peeled off and I never really asked him to do much. He picked up himself,” Dolan said.

“He is going to a stakes race next and I think he has earned it.”

Stakes racing is also in the future plans for Gresham.

“He is on the cusp of a Listed win,” Waller said.

“Those types of horses that can race up on pace – there is a race on every two weeks for a horse like him.”