Another Railway Stakes For Peters Team 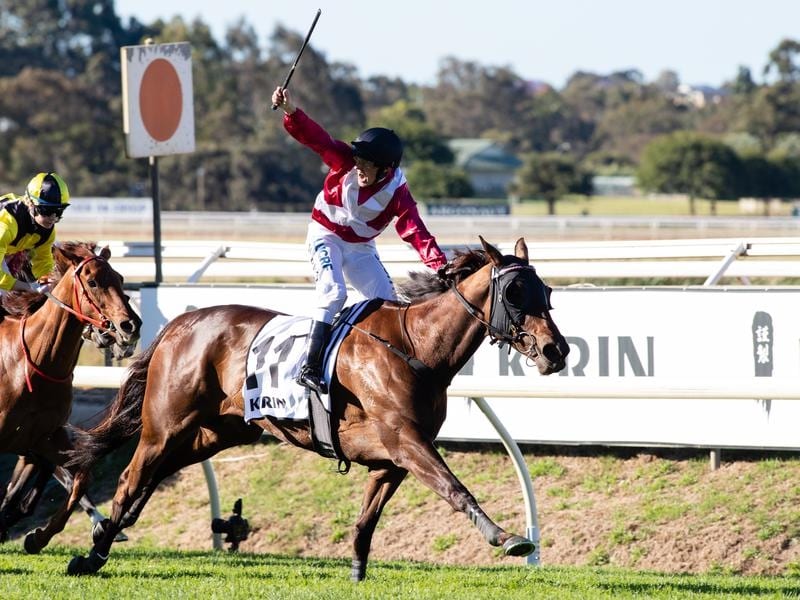 They call William Pike the King of the West and the jockey has lived up to it with a masterful ride on Galaxy Star to get the favourite home in the Group One Railway Stakes at Ascot in Perth.

The mare was back in the field early in Saturday’s 1600m-race and Pike admitted he was thinking of excuses to tell owners Bob and Sandra Peters and trainers Grant and Alana Williams.

But he need not have worried with Galaxy Star ($2.90 ) finding a gap near the turn and following Gatting through.

Once in the clear Galaxy Star showed a superior turn of foot to put 1-3/4 lengths on Gatting ($13) with Material Man ($9 ) a close third to complete a local trifecta.

“This is definitely the hardest race in this state to win,” Bob Peters told Sky Thoroughbred Central.

“This is the race we have aimed for ever since she was foaled and we have looked after her.”

Pike, who is also the leading rider in the country, said the early part of the race was nerve-wracking.

“I was terrified in the run and I was starting to go through my excuses,” he said.

“I had to make the best of a bad situation and I followed Gatting and then the gap came.

‘She was at her peak today. She was primed for this.”

Grant Williams was thrilled to win the race but more thrilled for the mare.

“The two horses who finished second and third are hard to get past,” he said.

While Galaxy Star won the Group One feature, the team also celebrated the win of Arcadia Queen in the WA Guineas with a chance they could clash at the highest level in the Kingston Town Stakes next month.

Arcadia Queen was the $1.90 favourite and had a more comfortable time during the race, running out a three length winner over Lady Cosmology.