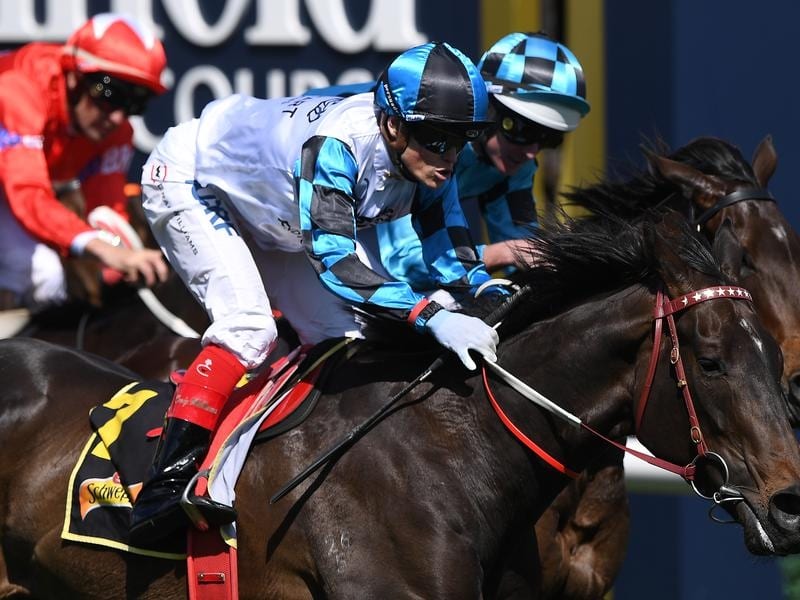 Dean Yendall is in the box-seat to win a third-consecutive Empire Rose Stakes at Flemington with the ride on Thousand Guineas winner Amphitrite.

A prolific winner across Victoria for a number of years, Yendall has become a go-to jockey for lightweight chances in big races.

He won the Empire Rose for fillies and mares, formerly Myer Classic, two years ago on three-year-old I Am A Star who carried 49kg.

A year later he won the race again on another three-year-old Shoals, who had 50kg under the weight-for-age conditions, and his mount for Saturday’s edition also fits that bill.

The Darren Weir-trained Amphitrite stormed home from last to win the Thousand Guineas last start and is one of four three-year-old fillies in the capacity field of 16 plus one emergency.

Amphitrite has come up with barrier eight and held favouritism at $4.60 on Wednesday with Flight Stakes winner Oohood ($9), Seabrook ($14) and Fundamentalist ($23) the other fillies in the race.

The 2016 winner I Am A Star finished last in her defence of the race 12 months ago but the five-year-old is back for another crack and has been a force against her own sex this spring in Melbourne with wins in the Group Two Let’s Elope Stakes and Stocks Stakes and the Group Three Ladies’ Day Vase.

Four-year-old Shumookh won one of the main lead-ups, the Group Two Tristarc Stakes at Caulfield, and will begin from barrier six if emergency Memzelle Tess (barrier two) does not gain a start.

“She has come right at the right time and she’s racing in superb form,” co-trainer Gai Waterhouse said.

“I think she’ll be very competitive if not extremely hard to beat.”

The Chris Waller-trained Shillelagh won the Group One Cantala Stakes (Kennedy Mile) on the corresponding program last year and is on the second line of betting at $8 ahead of stablemate Invincibella ($8.50).

Co-trainer Wayne Hawkes says Bella Martini, who has had to cover ground in recent starts, has been luckless this preparation.

But the four-year-old has drawn to get a nice run after drawing six.

“If she can just have a soft run somewhere she’s going to be hard to beat,” Hawkes said.

“It’s a very, very tough race to win. It’s not going to be easy but Bella Martini is in good form without winning.”