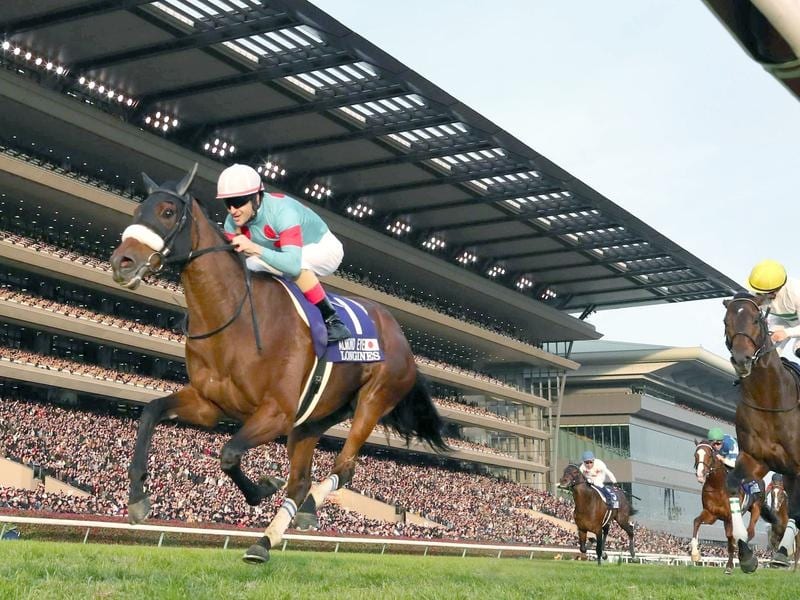 Almond Eye has set herself up for the world stage with her record-breaking win in the Japan Cup.

She ran a sizzling 2:20.6 for the 2400 metres on Sunday to join 2012 winner Gentildonna as three-year-old fillies to win the race.

Since running second on debut, Almond Eye has not been defeated, winning six races including the fillies triple crown.

“I had every confidence in her potential and she was in great form coming into the race,” her trainer Sakae Kunieda said.

“The Japan Cup itself being recognised as an international event and having won this race gives her various options to choose from including an overseas challenge that will most certainly be expected of her, although details will have to be discussed with the owners.”

The dominant favourite, Almond Eye started from the inside gate and travelled well for Christophe Lemaire to pull away from front runner Kiseki to win by 1-1/4 lengths.

Lemaire admitted to a few nerves but said the filly delivered as he knew she could.

“Personally I feel relieved to have won because I knew she had the potential to win but”you never know what might happen in the 2400 meters,” he said.

“Today I was a little bit anxious, but I think we saw the best Almond Eye in the race and it was a great show.

“I don’t really like the inside number one draw because it is very hard to make a plan and can depend on how you break. I didn’t want to put too much pressure on her out of the gate.

“She broke well, and I saw that Kiseki was taking the lead which was good because Kiseki is a good horse and a leader with a good pace, so I had the best leader for Almond Eye and was happy with how the race went.

“This is a very special filly as I keep telling the press in Japan that she is “Perfect” – her ability, temperament, she can adapt and race from any position, so if she has a chance to race overseas, I think she can race as well as she did today if not at least be competitive against the world’s best.”