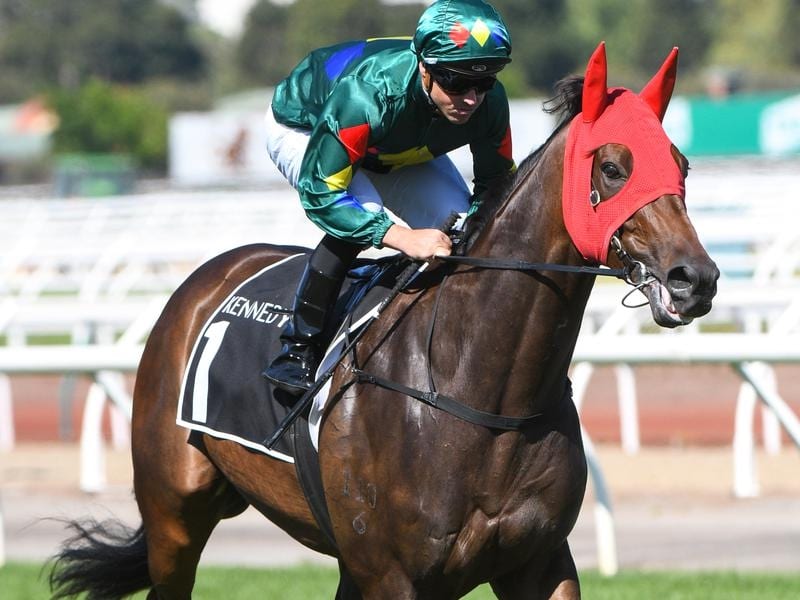 Alligator Blood is an odds-on favourite for his return to racing at Doomben but trainer David Vandyke is keeping a lid on expectations.

TAB fixed odds has installed Alligator Blood, the winner of the Group One Australian Guineas at Flemington in February, a $1.70 favourite for Saturday’s XXXX Dry Open Quality Handicap (1110m).

Although the four-year-old has an unblemished first-up record, he is yet to race at a distance shorter than 1200 metres.

He also has to carry top weight of 61 kilograms against nine rivals.

“I would’ve liked it to be 1200 metres but he should run top-three and I’m just looking for him to put in a good performance,” Vandyke said.

Alligator Blood is also the ruling $6 favourite for the $7.5 million Golden Eagle (1500m) at Rosehill on October 31 but Vandyke hasn’t settled on a firm lead-up program.

“The Golden Eagle is the grand final. Whether we go to The Everest first or the Silver Eagle is up for further discussion,” he said.

“When he came back in he was holding nice condition and he looked to have strengthened up a bit and he was in a good headspace,” he said.

“He’s got better with age. He’s always had a bit of ADD (attention deficit disorder) in him. He’s also very strong and he likes to have his way,” he said.

“We’ve certainly met half way. We have a good relationship. He’s a tough horse and as such he’s fairly easy to train.

“I’ve had good horses that are like ponies and I’ve had other horses that have been extremely difficult.

“He’s about in the middle but he is what he is. I’m glad to see it in him because I know when he’s feeling like he wants to take me on he usually wants to take the opposition on as well.”