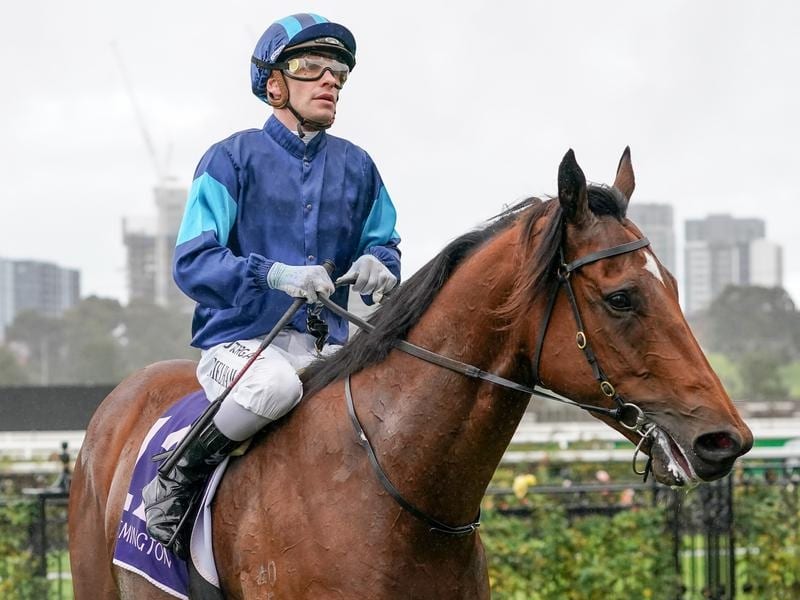 To be even racing let alone winning after suffering a life-threatening leg injury is a testament to the toughness of Alfa Oro.

The lightly raced four-year-old lines up for his seventh start in Saturday’s Neds Handicap at Caulfield after a spiral fracture to the right-fore cannon bone halted his career after two runs.

“It was pretty significant, three-quarters of the cannon bone,” trainer Matt Laurie said.

“He had to have a 10-hole plate with screws put in.

After almost two years away from racing, Alfa Oro returned at Pakenham in April, finishing second, before commencing a three-run winning streak leading into a maiden city success at Flemington last month.

The Flemington victory impressed Laurie who said Alfa Oro was lost down on the straight course but responded gamely when tackled by Spirit Of Aquada.

“If that had been around a bend, on a drier track, I’m sure he wins quite comfortably,” Laurie said.

“We trialled him last week to keep him up to the mark. He trialled nicely on the bridle on the course proper at Mornington and he’s backed that up with a couple of nice pieces of work.”

How far Alfa Oro continues beyond Saturday Laurie is unsure.

Laurie said Saturday’s outing would be Alfa Oro’s fifth start for the campaign in what is essentially his first racing preparation.

“We have spaced his runs but he seems to be lapping it up and he looks as good as ever,” Laurie said.

“But at some point he’ll have to have a little freshen up.

“It will all be based on how he goes this weekend whether we can look ahead and target something.”

Joining Alfa Oro at Caulfield on Saturday is stable newcomer Sondelon in the Neds Toolbox Handicap.

Sondelon was trained by Gai Waterhouse and Adrian Bott and joined Laurie in the hope of turning his form around.

“We’ve been getting a few of these older horses that are established to see if we can revitalise them,” Laurie said.

“It doesn’t always work, but Sondelon, if he can get back to his old form, he’s more than capable.”