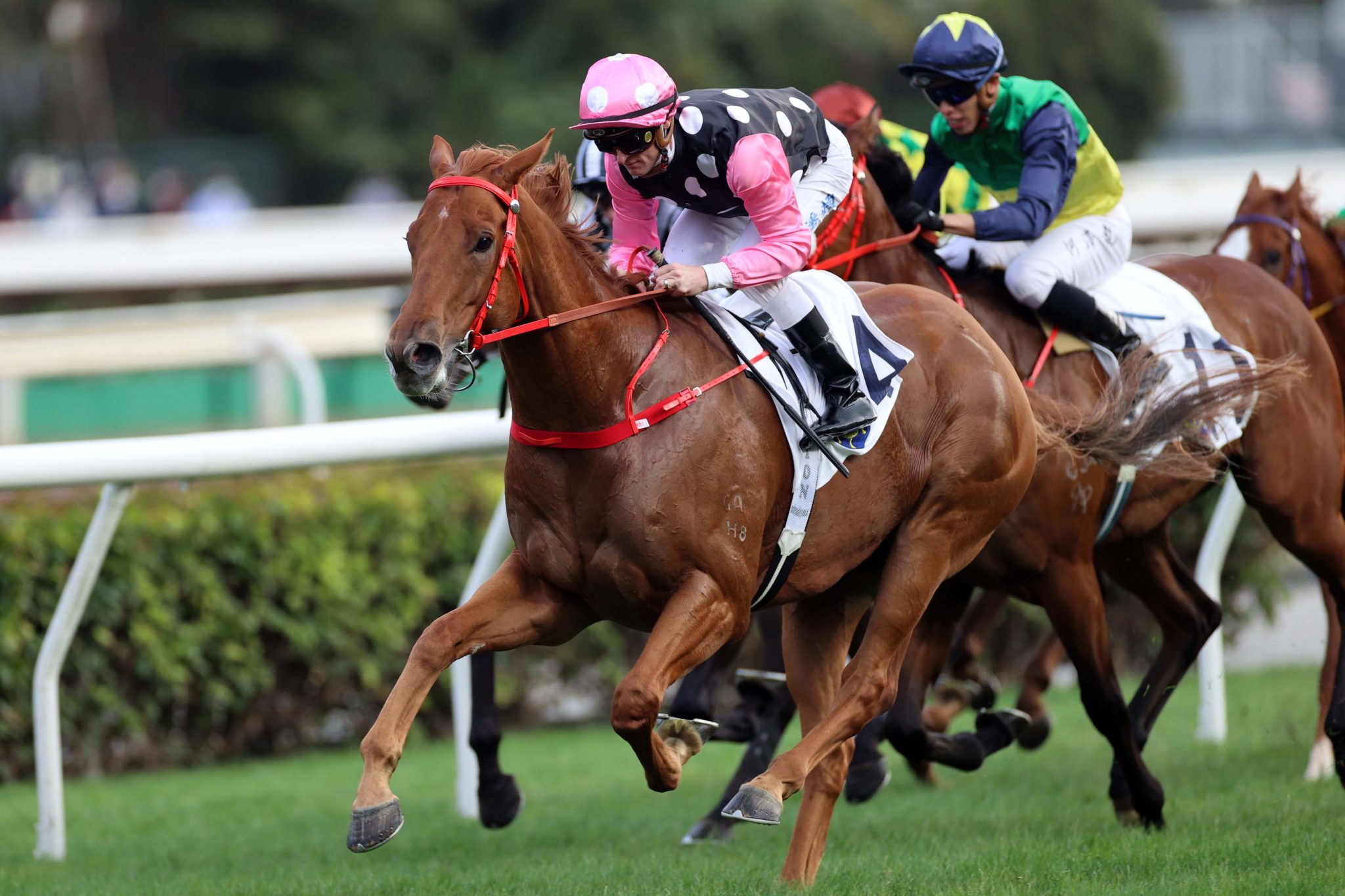 Beauty Eternal has emerged as a potential Four-Year-Old Classic Series contender for John Size, erasing the memories of recent mishaps with devastating victory in the Class 3 Peony Handicap (1200m) as Zac Purton romped to another quartet at Sha Tin on Saturday.

Banishing the bad luck which saw the Starspangledbanner gelding scratched from his past two engagements – twice on veterinary advice – Beauty Eternal treated his rivals with contempt, sitting wide throughout from barrier 12.

An authoritative debut winner before suffering significant interference when beaten into third placing on November 6, Beauty Eternal restored the faith of a growing band of admirers by clocking the fastest final 400m winning sectional time of the day – 22.64s.

“He’s obviously a talented horse and he was able to begin well and he was able to get into the perfect spot for us, out there like that and let him doing his thing,” Purton said of Beauty Eternal after taking his season tally to 82 – more than double that of second-placed Vincent Ho (40).

“It’s just good to have him back at the races after a few little hiccups and hopefully it’s behind us now and we can get on with it.”

Asked if Beauty Eternal, an entrant for the HK$24 million Hong Kong Derby (2000m) on 19 March, was a probable Classic contender, Purton said: “John will work that out – let him decide.”

Recovering quickly after stumbling out of the gates, the seven-year-old was given a clever ride by Purton, who stalked pace-setter Classic Unicorn before taking over and holding off Ka Ying Master by three quarters of a length.

Lor, who leads the 2022/23 trainers’ championship with 30 wins from Size (28) decided to back up Beauty Live after his fast-finishing fourth behind Tuchel at Sha Tin on 15 January and was duly rewarded for the decision.

“There was a 1600 metre race today and another at the end of February, that’s why I raced him again so quickly to see if 1600 metres is suitable. After last Sunday, everything was looking good and he was eating well, so I knew he was a good chance today,” Lor said.

Hall provided the third leg of Purton’s treble with newcomer Prince Of Porty, a Wandjina gelding, in the Class 4 Rose Handicap (1000m).

“David has done a lot of work at home with him and I’ve had a bit to do with him as well and it’s frustrating because he’s a lovely horse,” Purton said, referring to Prince Of Porty’s racing manners. “He’s just a bit laidback and doesn’t really understand what he has to do.

“Today, the speed of the race had him off the bit early and he didn’t travel as I thought he would and I really had to get to the bottom of him but he showed his character and continued to chase. He wanted it and he got it.”

“I think he is an upcoming young stayer with good potential,” Cruz said of Five G Patch, a son of Camelot who won twice in Ireland for Joseph O’Brien when known as Collins Street.

Whyte and Hewitson combined for their eighth win in tandem this season when Colourful Prince broke through in the Class 5 Orchid Handicap (1200m, dirt).

“He’s taken a while to find his tune,” Whyte said referring to the Per Incanto’s gelding 11 previous unsuccessful attempts. The South African then figured with another first-time Hong Kong victor when Happy Trio snared the Class 5 Daisy Handicap (1200m) under Karis Teetan.

“It’s nice to get a double,” Whyte said after registering his stable’s 17th win of the season.

Flourishing after a relatively barren spell, Hewitson posted a double in successive meetings after last Wednesday’s pair to have 22 victories for the season following the success of Michael Chang-trained Ching in the Class 4 Gladiolus Handicap (1600m).

“He’s a decent horse who has been a bit unlucky. I told the jockey to treat him like a good horse and ride him with confidence. He’s still got plenty of room to improve, he’s still a bit of a baby,” Chang said.

Matching Hewitson’s brace after triumphing on Ricky Yiu’s Adefill in the Class 4 Peach Blossom Handicap (1200m, dirt), Teetan said: “It’s nice to have a double, there’s been a few meetings where it’s been quiet but that’s how it goes here.

“I thought I had some nice rides today. Happy Trio dropped down in class and thanks to Dougie and his team for giving me the ride and Adefill was a little bit disappointing the last time I rode him and I came back and said to Ricky ‘Put this horse on the dirt, sent him back to Conghua and freshen him up’ and he’s won, so I’m very thankful to Ricky and all the connections.”

Yiu posted a double when 110/1 chance Bulletproof stunned with victory in the Class 4 Cineraria Handicap (1400m) under Ruan Maia.

“I wasn’t expecting him to be close. He hasn’t performed for a while at Sha Tin but the main thing is the jockey knows him well and even with top weight (135lb) and a bad draw (13), he could make it happen,” Yiu said. “He’s a nice horse and a winner is a winner – I don’t care how much they pay.”