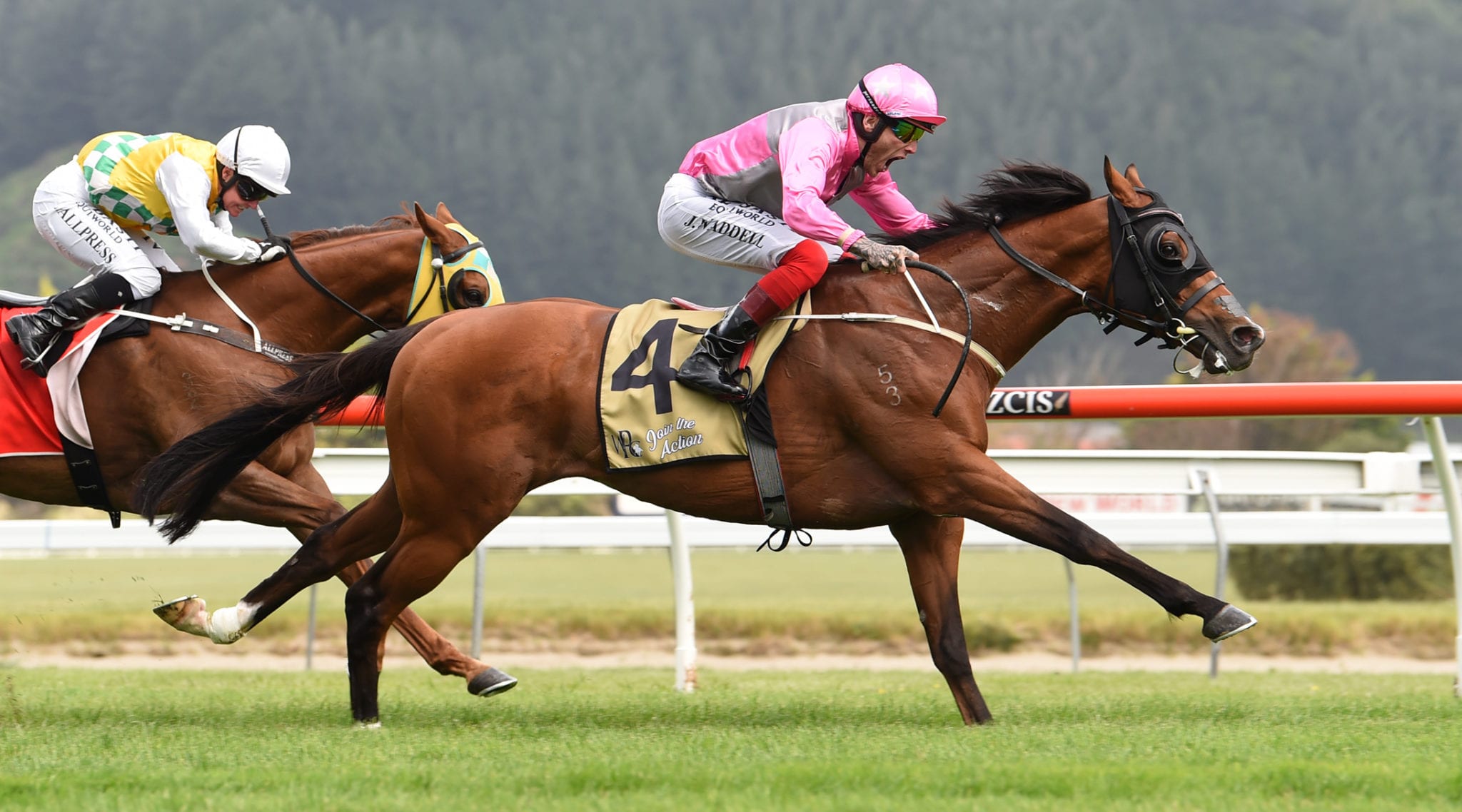 Group 1-winning miler Wyndspelle will take up stud duties at Grangewilliam Stud in South Taranaki this spring where he will stand for a fee of $7,500 plus GST. A son of Iffraaj, Wyndspelle competed in top-flight races across five seasons, performing with distinction in both Australia and New Zealand.

Prepared by Johno Benner and Hollie Wynyard through the latter half of his career, Wyndspelle was a model of consistency, netting connections close to $700,000 in prizemoney. The well-bred entire claimed a deserved Group 1 victory when winning the Captain Cook Stakes (1600m) at his second-to-last start and he bowed out with a narrow second placing in the Group 1 Thorndon Mile (1600m) in January.

Racing at the highest level from age two through six, Wyndspelle was Group 1 placed on seven occasions, including a third placing in the Group 1 Cantala Stakes (1600m) at Flemington behind fellow Kiwi bred Shillelagh. Runner-up in the Group 1 Diamond Stakes (1200m) at two, Wyndspelle won the Group 2 Waikato Guineas (2000m) at three and proved most effective at a mile as an older horse. “He is a special horse,” Benner said. “He has got a great CV as a Group 1 winner and seven times Group 1-placed at all age groups and distances. “He is a warhorse, there are not many horse who week-in and week-out give you 110 percent like he does. He was a gentleman to train.”

Grangewilliam Stud principal Mark Corcoran is delighted to secure Wyndspelle for stud duties, joining a roster that features young stallions Derryn and The Bold One in addition to Group 1 sire Zed. “I’m rapt to have the chance to stand him,” Corcoran said. “He was a high-class racehorse and obviously very sound as evidenced by his racing longevity. “He was Group 1 performed in Australia as well so that was a big tick and he was probably a bit unlucky to come up against Melody Belle a few times, he raced against some top-class horses and performed really well. “I loved the way he finished off his races, he always fought on to the end. He was a real fighter.”

Corcoran believes Wyndspelle, who is an out-cross to Danehill, will impress breeders and future buyers alike with his pedigree, performance and type. “He is a good looking horse, a nice bay and 15.3 hands,” he said. “He is by Iffraaj who has been a great sire here and has been champion sire of two and three-year-olds. “He is out of a High Chaparral mare and an out-cross to Danehill, so that appeals. He will suit our mares very nicely.”

By internationally acclaimed stallion Iffraaj, the sire of 10 individual Group 1 winners, Wyndspelle is out of the winning High Chaparral mare Western Star, who is also the dam of Group 3 performer Selica. A daughter of Group 2 winner Alberton Star, a precocious juvenile, Western Star is a half- sister to stakes winners Lady Alberton and Alberton Park.

His third dam is Alberton Lass, dam of seven winners including Group 2 winner Sir Alberton, while it is also the family of Group 1 Doncaster Handicap (1600m) winner Brutal, who stands at Newgate Farm in Australia at a fee of A$27,500 inc GST. “Most good stallions come from good female families and he fulfils that criteria,” Corcoran said. “He will really complement our existing roster of stallions. “Zed is a proven sire of stayers and you have to give them time. Derryn was an out and out sprinter and that is the types he is leaving. This horse probably fits nicely in the middle. He has the precociousness but you like to think he will get over that middle distance as well.”

Managing part-owner Jen Campin is pleased to be retaining an interest in Wyndspelle and will be supporting the Group 1 miler with a strong selection of mares, including some specifically purchased to patronise the son of Iffraaj. “We have recently purchased a number of well-bred mares from Australia by Encosta de Lago, Redoute’s Choice and Snitzel, all from strong female families,” Campin said. “These are additional to those in our current broodmare band that we have successfully sold yearlings out of at Karaka Book 1.”

Campin’s racing partners in Wyndspelle, John and Shirley Frew and Neil Randles also retain equity in the exciting stallion prospect. “We’re thrilled to be partnering with Grangewilliam Stud and look forward to the next chapter of Wyndspelle’s career,” Campin said.

Lifetime breeding rights will also be sold in the horse so that breeders can share in long-term success. “We have up to 15 lifetime breeding rights available to breeders,” Campin said. “A one-time payment entitles the broodmare owner to send two mares for the first three seasons and then one every year after that for life. “We are confident in the success of Wyndspelle and his future progeny. I have been overwhelmed by the expressions of interest in the horse and messages of support we have had prior to a public announcement regarding his stud career.”