Winx a chance for Flemington debut at 2016 Emirates Stakes 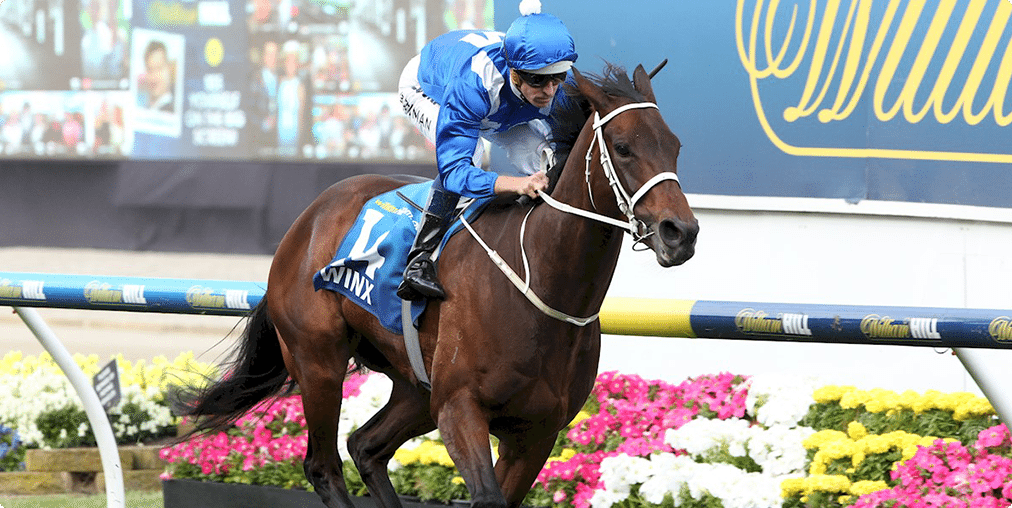 THE possibility of Cox Plate-winning mare Winx lining up at Flemington for the Group One Emirates Stakes has the racing world holding its breath, in particular VRC racing manager Martin Talty.

Winx was a devastating winner of the 2016 Cox Plate on Saturday and a Melbourne Cup-like crowd would be expected if the Chris Waller-trained mare was to have its first run at Flemington on November 5.

“She’s a marvellous world class racehorse. She’s absolutely trounced her rivals in the Cox Plate and if she comes up it’ll be a fabulous bonus to the day,” Talty said.

“Chris (Waller) will obviously check her out all this week but the races are two weeks apart and it’s worth $2 million.

“Winx has now gone to another level. She is to the public what Black Caviar was those years ago.

“Even those who know little about our sport are starting to know who Winx is.”

Waller was in no rush to make his decision about running in the Emirates and will instead monitor Winx’s condition following the win on Saturday.

“We’ll just wait and see how she is before making any decision on the Emirates,” Waller said.

Yankee Rose ran a credible third in the Group One Cox Plate on Saturday and trainer David Vandyke is keen to press on with plans to run in the VRC Oaks on November 3.

“She is not too bad, a little bit dusty this morning, but you would expect that,” Vandyke said about how Yankee Rose pulled up after Saturday’s run.

“This filly has just competed at the top level and was off the bit a long way from home, trying her guts out.

“I’ll keep an eye on her over the next four or five days, but at this stage she is going to the Oaks.”

Yankee Rose is a short favourite for the Oaks – currently $2 at CrownBet – and Vandyke is proud of what his filly has already achieved.

“She has won two Group One races, run second in the Golden Slipper and third in the Cox Plate in her first year of racing,” Vandyke said.

“It was a thrill just to have a runner in the Cox Plate, but to see her making ground down the outside and being strong to the line was unbelievable.

“To be there and feel the atmosphere was such an experience.

“I was looking up at the grandstand and the crowd after the race and trying to take it all in.

“It was an amazing day and we were part of racing history.”

The Chris Waller-trained Grand Marshal won’t receive a penalty for the 2016 Melbourne Cup after winning the Moonee Valley Cup on Saturday.

Grand Marshal battled in the straight with stablemate Who Shot Thebarman and the win won’t come at any cost to its weight for November 1 at Flemington.

“He’s currently handicapped at 53.5kg, the same weight which he carried when 21st behind Prince of Penzance in last year’s Emirates Melbourne Cup, and will remain on that weight.”

Kingston Rule in 1990 was the last horse to complete the Moonee Valley Cup/Melbourne Cup double and Grand Marshal is currently $34 at Sportsbet to repeat that feat.

Sacred Elixir was a stylish winner at Moonee Valley on Saturday and trainer Tony Pike believes the victory was even better than it appeared.

“In the end it was a relatively soft win because of that traffic he encountered and it wasn’t a hard run at all,” Pike said.

“He was bright on Saturday night and good again (Sunday) morning.

“We gave him a light trot around the bull ring and my job now is to just keep him in one piece this week.”

Sacred Elixir is currently $3.20 at Sportsbet for the 2016 Victoria Derby, which will run at Flemington this Saturday, October 29.

“I’ve always thought he would be a Derby horse, but obviously a lot of water has to go under the bridge before we get to this point,” Pike said.

“He’s not at his best on tight turning tracks, but he’s still managed to win two of three this time in at them. Flemington should suit him down to the ground.

“I thought he was really good in the last little bit on Saturday and I’m exactly where I wanted to be with him.”