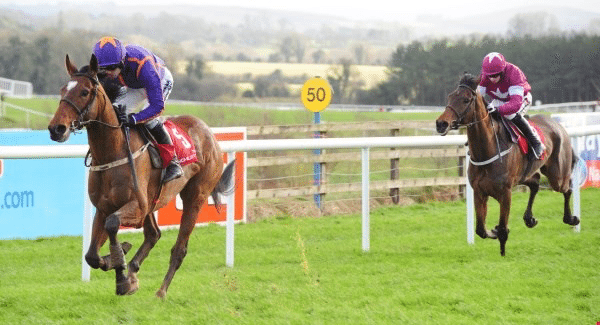 ORDER Of St George struggled in a shock loss in the Group 1 Irish St Leger at the Curragh last night.

The Aidan O’Brien-trained runner was the short $1.16 favourite at Sportsbet.com.au, but wasn’t able to reel in Wicklow Brave, which lead all the way for the biggest upset this year.

The win gave Willie Mullins his first flat group 1, which he credited to the tactical advice from champion jumps jockey Ruby Walsh.

“Ruby rode him in his last bit of work and he said there may not be anything to make the running,” Mullins said.

“We have been holding him up all our lives and he often doesn’t produce what it looks like he will.

“We discussed it with Frankie (Dettori) before we came out of the weighing room and no one else wanted to make it, so it just worked out fantastic.”

The 2016 Melbourne Cup could be on the cards for Wicklow Brave, which has been slashed into $17 with Sportsbet.

“Hopefully it will be the Melbourne Cup next. That has been the plan all year as the pace and the ground will suit,” Mullins said.

The all-important Melbourne Cup weights will be released on Tuesday.

Payne happy to be back in the saddle

“It’s great to be back. Going out there was a little bit of nerves, but once I got on the horse it was OK,” Payne said.

Payne hasn’t given up hope of riding Prince Of Penzance in the 2016 Melbourne Cup and stated that she was consistently contacting trainer Darren Weir asking for the ride in the Makybe Diva Stakes last Saturday.

“I drove Darren Weir mad last week trying to get on him in the Makybe Diva for my first ride back. They (Prince Of Penzance’s owners) don’t owe me anything and neither does the horse,” Payne said. “It’s a very difficult situation. I know the owners are concerned for my welfare and I really appreciate it, but I would love to be on his back.”

There has been plenty of attention paid to Payne’s comeback with bookmakers even offering markets as to whether she would ever ride another winner, but the pressure is something Payne has had time to adjust to.

“It is something I have had to learn to deal with – every other comeback there’s no pressure,” Payne said. “I felt the urge again when I was coming to the races, I had a lot of time to think about it in the car coming down here on my own.”

Prince Of Penzance worked home fairly in the Makybe Diva Stakes, but remains a $34 chance at CrownBet for the Melbourne Cup in November.

English to resume in The Shorts

One of the most exciting horses this spring will be Golden Slipper runner-up English, which is set to resume in the Group 2 The Shorts at Randwick on Saturday.

The Gai Waterhouse-trained filly won the Group 1 All Aged Stakes last preparation and Waterhouse believes the lengthy spell will pay off this spring.

“She has always been a bit highly strung but she is much more relaxed in herself, which will make it easier for her to cope with the harder racing against the boys and at weight-for-age,” Waterhouse said.

“She’s a clean-winded, lovely mare… and she was always going to be sleek like a greyhound but she is very healthy and happy.

“She has a lot of upside and I don’t think we’ve come to the bottom of her yet.”

English has had two trials wins in preparation for this Saturday’s run which will be the entree before running in the Premiere Stakes at Randwick and ultimately the Group 1 Manikato Stakes at Moonee Valley on October 21.

“I do (think it will go to a new level this spring) and I believe she has made the weight-for-age improvement,” Waterhouse added.

Bowman not taking anything for granted aboard Winx

There’s a huge responsibility when riding Winx and Hugh Bowman knows all about it, but after a soft run in the Warwick Stakes when resuming this campaign, the Cox Plate champion should find things harder this Saturday.

The champion mare lines up in the Group 1 George Main Stakes which will have better opposition than it faced last start, which includes Japanese runner Tosen Stardom.

Bowman looks forward to riding Winx each start and although there’s some pressure on him, he states that he doesn’t feel the nerves.

“I don’t feel the pressure but there is a high level of responsibility riding her,” Bowman said.

“But I can’t explain how much confidence I get from riding her.

“No matter how I’m feeling before I get on her, when I canter to the barrier stalls it will all disappear and we will do our job.”

Winx is currently $1.30 (all-in) at CrownBet for the George Main despite having missed the run in the Chelmsford Stakes, but Bowman doesn’t think fitness will be an issue this Saturday.

“She is a supreme athlete and there doesn’t appear to be any chinks in her armour, but in saying that we don’t take anything for granted,” Bowman said.