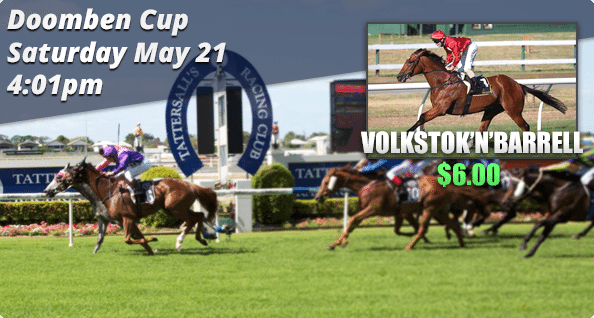 THE $650,000 Group 1 Doomben Cup is one of the highlights of the Brisbane winter carnival and we have all the free form and tips for the feature.

The 2000m staying event features some of Australia’s best staying types, but only a field of 10 has accepted. Punters have flocked towards current favourite Hauraki, but support is coming for the New Zealand invader Volkstok’n’barrell.

There is plenty of good racing action on the eight-race card so sign up with Sportsbet.com.au and check out its Doomben Cup fixed quinella market which offers huge odds for those daring enough to pick the first two home.

Bjorn Baker is looking to continue his great run of form with Selita in the opening event. The four-year-old has been the best-backed runner of the field at $3.40 and there appears to be plenty of stable confidence. The winner of four from nine put four-consecutive wins together last campaign and it looks a danger at 55kg.

A big drifter in the market has been Wicked Intent which fought hard in behind Divine Centuri last Saturday. The Chris Munce-trained colt has won three times on this track with three placings and four wins have come at this distance. It opened at $4, but has drifted to $4.60 which isn’t a great sign.

Office Bearer opened at $7.50 and has come in for support to $6. The experienced six-year-old is fresh up after finishing sixth in the Standish at Flemington and even though it hasn’t won for some time, it has always had the ability. The inside draw won’t suit its running style, but consider if the money continues to come.

Ben Currie lines up Col ‘n’ Lil which closed hard last start at Gold Coast and the increase in distance will suit nicely. The four-year-old won on this track five starts back over only 1350m, but its efforts since have been fair and it gets a nice weight of 55.5kg. Opened at $5 and has drifted to $5.50.

It will have to carry 60.5kg, but Astronomos has to be well-respected. The David Vandyke-trained entire went close behind Brettan at Doomben last start and Vandyke is very confident about its chances this Saturday. The five-year-old is unbeaten at this distance from two starts and punters have backed it off the map. It opened at $4 which was a generous price from Sportsbet and it has been bet into $3.20. Looks the one to beat.

Caillebotte didn’t finish too far behind Maurus last start which lines up in the Doomben Cup. The Matthew Dunn-trained gelding won consecutive races prior to that and it won them by big margins. With the right run it could upset the favourite and the each way price of $7.50 is good value.

Legerity was a strong last-start winner at Rosehill and that form should stack up nicely at Doomben. The Hawkes-trained colt has form in behind the likes of Rampage and Purrari, but drawing wide in barrier 14 won’t make life easy. Bookmakers are keeping it safe at $6 and it could win with a touch of luck.

Peter and Paul Snowden line up Jericho which has been backed into solo-favouritism at $5. The Smart Missile colt was fourth on debut behind Yankee Rose which has been well and truly franked and it then narrowly won last start at Warwick Farm. It should be able to strengthen off that win and prove tough to run down.

Hostwin Legend is over the odds after receiving a tough run last Saturday. The Gary Moore-trained colt was left four wide for most of the trip and it ran seven-wide from the 300m mark. To run fifth was a credit to its toughness and Moore has a big opinion of it. $21/$6 is a great price in a wide-open field.

Palazzo Pubblico has been a controversial horse over the past couple of years, but it has plenty of ability with or without some outside help. Now with Matthew Smith, the four-year-old was a last-start winner at Rosehill and the inside draw with the light weight is dangerous. Bookmakers are struggling to set a clear-cut favourite and it sits around the mark at $5.50.

Fine Mist brings a touch of class to the field having won six from 17 starts for Paul Murray. The daughter of Good Journey finished only 1.8 lengths behind Furnaces in the Hawkesbury Rush last start and it had no luck in the running. It was three wide throughout and with a better in transit here, it should be prominent at $5.

Serenade has won only two from 13, but it has been taking on tough fields and it should find this more to its liking. The Michael Moroney-trained filly scored an easy win two back and it ran third at Morphettville last start behind the talented Rageese. Keeps at the light weight and it doesn’t look the worst bet at $7 after opening at $6.50.

We wouldn’t say Artlee was a tragedy beaten last start, but it should have finished much closer than sixth. The Todd Willan-trained gelding was coming along the inside of runners before running out of room late in behind Malaguerra in the Group 1 BTC Cup. It drops right back in grade for this and it has been gifted a beautiful weight of 55.5kg. Will run well based on that at $2.90.

Charmed Harmony comes from Victoria where it was a last-start winner at Caulfield. The six-year-old has won 13 races from only 32 starts and its running style makes it a punters’ favourite. It goes forward and tries to lead all the way, so drawing barrier 11 isn’t overly concerning. Nine wins have come at this distance and if it handles running right handed, it will be tough to beat at $7.50.

Religify will adopt similar tactics to Charmed Harmony which will make for an interesting race. The Chris Waller-trained gelding won well last start at Rosehill and it hasn’t missed a placing in four starts at this distance, but we don’t think it will have an easy time of it in front. Looks a chance down at 54.5kg with James McDonald in the saddle and the $6 suggests it’s a winning chance.

Lyricist has been an impressive winner of its last three races and punters are getting a good price. The Toby Edmonds-trained filly is currently at $15 and even though it has drawn wide, it should matter over this distance. The daughter of Dylan Thomas is bred to run over this distance and it will only get better with time. This race might have come too soon, but it’s a horse for the future.

Falkenberg has drifted from $4.60 to $4.80 in the win market, but punters are still expecting a big effort. The Peter and Paul Snowden-trained filly won by 4.5 lengths at Warwick Farm three back before running in behind Imposing Lass on two occasions since. It has plenty of talent, but it might pay to watch for any further drifts in the market.

Most of the money has come for Imposing Lass which has now won four from five. The Bjorn Baker-trained filly has defeated similar fields of late and it looks a strong winning chance again. Drawing barrier 18 is a killer as it likes to win from the front, so it will need to call upon everything it has this Saturday. It opened at $5 and has firmed into $4.60.

Hauraki has been an expensive horse for punters, having won only three from 16, but bookmakers have made it the favourite once again. The John O’Shea-trained gelding finished second in the Hollindale Stakes last start which is a good form guide and it has two placings in behind Winx earlier this preparation. It will get all favours from the inside draw, but be weary that it doesn’t win often and the $3.40 is a short price.

Volkstok’n’barrell ran much better last start in the Hollindale than it did in the Group 1 Doncaster Handicap. The Donna Logan and Chris Gibbs-trained gelding was winner at its last start in New Zealand and the Kiwis love winning throughout the Brisbane winter. It’s not quite as wet as usual, but it looks an each way hope at $6 and $2.20 for the place.

After the comments from trainer David Vandyke, Maurus should be thrown into calculations. It won by 3.5 lengths last start at Doomben and Vandyke believes it’s running better than stablemates Sir John Hawkwood and Astronomos, which could give punters a good guide earlier in the card. It can run on any surface and the former import looks the value runner at $21 if the pace is genuine. If it’s a sit-and-sprint you can all but rule out its chances.

Rangipo will be looking for more distance after its last race came in the New Zealand Derby over 2400m. The Tony Pike-trained gelding won the Derby and took its tally to seven wins from 12 starts. It has the form on the board and it brings a fair amount of class so expect it to be around the mark at $10 after opening at $12.

Sir Bacchus has impressed everyone by winning both starts since returning from a spell. The Chris Waller-trained gelding defeated the likes of Supply And Demand and Barood last campaign before running on late in the Magic Millions Guineas. It has looked deadly this preparation and it could well rise through the grades nicely this winter. A horse for the future at $4.

Rageese was devastating when winning at Morphettville last start and it has turned its form around completely with Darren Weir. The beach must be doing it some good as it has won back-to-back races and is now the favourite at $3.60 for this. It will need some luck from barrier 14 and running right-handed might cause it some problems, but respect on talent alone.