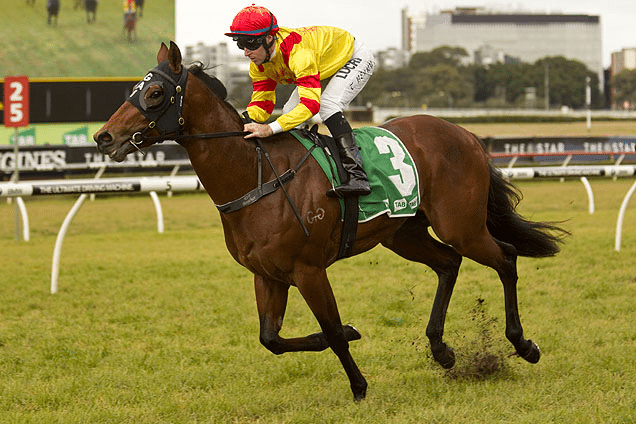 THE training partnership with Gai Waterhouse and Adrian Bott got off to the best possible start on Saturday, when their impressive runner Thronum won the Listed Rosebud at Randwick.

Bott believes the win is just the start for the new Tulloch Lodge partnership, which formed when Mark Newnham went out on his own earlier this year.

Bott was relieved to get the win and is looking forward to bigger and better things.

“It was a huge thrill and huge relief,” Bott said.

“You don’t underestimate the pressure or the responsibility involved. That’s a challenging aspect of the role. I like to thrive on that challenge.

“To have the support of someone like Gai and with the history around the stable, it’s really exciting.”

Thronum is currently $15 at Crownbet to win the Golden Rose and stablemate El Divino (half-brother to Cox Plate champion Winx) is the best-rated chance for the stable.

“He (El Divino) is one of our top colts going into the carnival,” Bott said.

“He’s a group one in our eyes and I’m looking forward to getting him up and going.

“He will most likely resume in the Run To The Rose and then second up into the Golden Rose.

“The Golden Rose is the main target and that will give us a good indication of where to next for him and what targets to identify in Melbourne.”

Bott and Waterhouse have a good team of youngsters which includes Thyme For Roses, Scarlet Rain, Prompt Response and debut winner Evacuation.

“He’s a colt bred and owned by Ron Gilbert of Highgrove Stud,” Bott said of Evacuation.

“He won very impressively (on debut) and he’s come back much bigger and stronger.”

The 28-year-old is excited about the upcoming spring carnival.

“If that all falls into place, hopefully it will be an exciting spring,” he said.

The Barry Lockwood-trained Hidden Pearl was centre stage at Eagle Farm on Saturday when winning the Tim Bell Memorial.

The speedy sprinter had been one of the best-backed runners throughout the week, but a late betting drift from $1.90 to $2.70 had some people nervous. The quality mare, however, was never in doubt and raced away for an impressive victory.

It was only nine months earlier at Flemington where it suffered a potential career-ending injury and its return to the track was a triumphant one for Lockwood.

“After seeing her that day, I have always been worried it might happen again,” Lockwood said. “Basically, the joint at the top of her rump had torn apart. She didn’t walk properly for two months after that.”

Hidden Pearl called upon its class on Saturday and put multiple lengths on a field which isn’t packed full of talent, but it was a nice hit-out before preparing for the Group 2 The Shorts in Sydney.

“She’s had a lot of work. Right from the that day at Flemington. The Vet Tim Roberts looked after her initially and then we sent her to Washpool where she spent two months on the water walker and treadmill,” Lockwood said.

“She was well and truly ready, but I always had that day in the back of my mind. The injury was very severe. So this is just terrific.

“She just loves running. I have never come across any other horse like her. She loves every minute of it.”

“I didn’t need to start pushing her until the 200m. She gave me a brilliant feel today.”

He just couldn’t hold it in.

Top Australian jockey Kerrin McEvoy was fined $500 for improper conduct on Saturday at Randwick for being caught urinating in the barriers.

McEvoy was riding Storm System, but nature called and he hoped off the horse to relieve himself in a vacant barrier which was situated in front of the grandstand at the 2400m mark.

“You do realise that there are cameras everywhere and that you were in front of the grandstand,” he said. “It is not something we can condone.”

McEvoy tried to hide his actions and stated that he had been rehydrating after wasting to ride Capitalist at 51.5kg which was subsequently scratched.

“I had put on two kilos since yesterday once I knew he was out. I have been going to the toilet a lot,” McEvoy said. “I was just busting out there and it is not something I would usually do, but I felt I need to do a professional job (in the race).”

Despite his mishap, McEvoy is still $17 to win the NSW Metro jockeys title at Sportsbet.