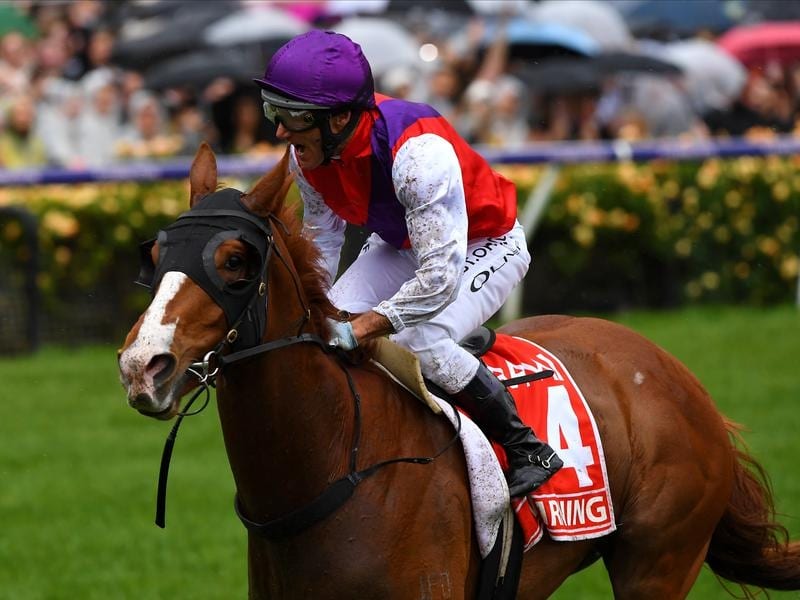 Victoria Derby winner Warning begins a campaign aimed at racing’s most prestigious prize, the Melbourne Cup, when he resumes in the Makybe Diva Stakes at Flemington.

Although he has run well in a recent 1200m jump out at Mornington, co-trainer Sam Freedman isn’t expecting him to return to racing with a win in the 1600 metre Group One event on Saturday.

“It’s a beginning of a Melbourne Cup campaign which is a long campaign. He’s a little soft at this stage,” Freedman said.

Freedman says from barrier nine, Warning, who will be ridden by Billy Egan, will be given time to find his feet in the run.

“Hopefully he’ll then finish off sharply. I can’t see him figuring until he gets out in distance to at least 2000 metres and our ultimate goal is the Melbourne Cup,” he said.

“He’s been trialling up well in the blinkers and that was a good hitout. We’re really happy with him.

“He’s in nice condition and is enjoying himself. It will be good to have him back at Flemington where he is undefeated.”

Freedman said they believe Warning is a better horse racing in the Melbourne anti-clockwise direction.

“He went OK in Sydney, although he wasn’t helped by an ordinary ride in the Sydney Derby,” Freedman said.

Warning then went to Adelaide where he finished third in the Chairman’s Stakes and filled the same placing in the South Australian Derby behind Russian Camelot.

“I thought he was brilliant in Adelaide as he was held up and should have finished second to Russian Camelot, rather than third, although he finished three or four lengths behind him,” Freedman said.

The Anthony and Sam Freedman stable also has two other runners on the day with mare Southbank in the Let’s Elope Stakes and three-year-old Supreme Idea in the Cap D’Antibes Stakes.

Freedman believed Southbank was back in the form she was in last spring when she finished third in the Thousand Guineas and he said if the predicted rain came, Supreme Idea would have a great chance.