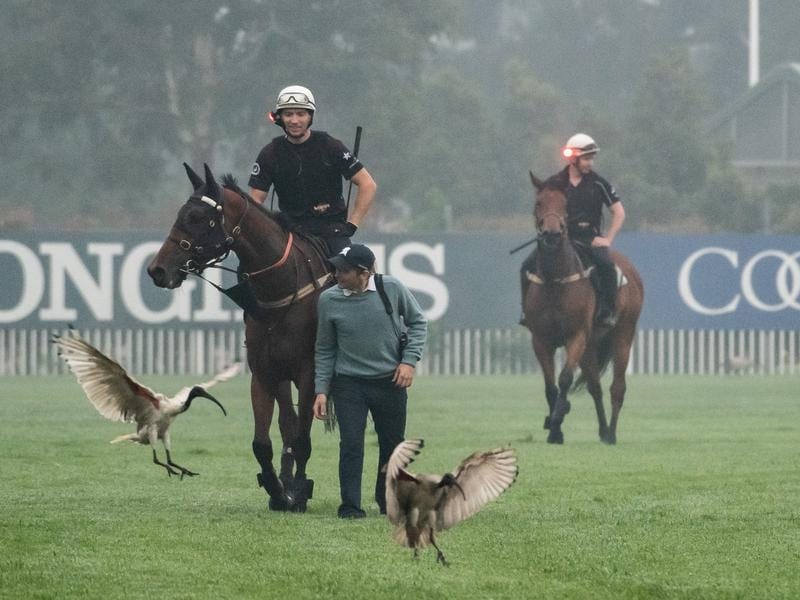 Punters have crowned Arcadia Queen favourite but Chris Waller is adamant stablemate Kolding is every bit as good a chance for the inaugural Golden Eagle.

The champion Sydney trainer will saddle up the Group One-winning duo in the new $7.5 million showpiece exclusively for four-year-olds at Rosehill.

“The betting would suggest Arcadia Queen is the better chance but my eye would say that Kolding is a very good horse.

“He’s a very serious horse that’s continued to improve and I think he deserves the respect to be pretty close to her in the market.”

Fittingly, they could barely be separated at the barriers as Kolding and Arcadia Queen drew gates four and five respectively.

Waller was chuffed for the pair to jump side by side and avoid a wide gate in the packed field, which dropped to 16 starters with his other stable runner Zousain scratched.

Where the two differ is along distance lines in their Golden Eagle lead-ups.

Arcadia Queen is stepping up to the 1500m after beating only one home last start in the Everest (1200m), while Kolding drops back from the 1600m of his Epsom Handicap win on October 5.

Waller insists both are well suited to the distance, noting Arcadia Queen was a Group One winner over 1800m last year in the Kingstown Town Classic at Ascot.

“I wouldn’t say that that’s her best distance but that’s how versatile she is,” he said.

“Kolding’s Epsom was his second time over the mile, but all of his previous races have been shorter distances and if anything I think he’s a bit more explosive.”

He said Arcadia Queen’s Everest effort was forgivable after she was checked in the straight and she deserved her favouritism tag.

“The 1500 metres will be perfect. We don’t have to ride her too close.

“We won’t be giving away our good barrier draw but most importantly we’ll be having her in a nice comfort zone where she can travel, and then you’ll see her good turn of foot at the end of the race.”