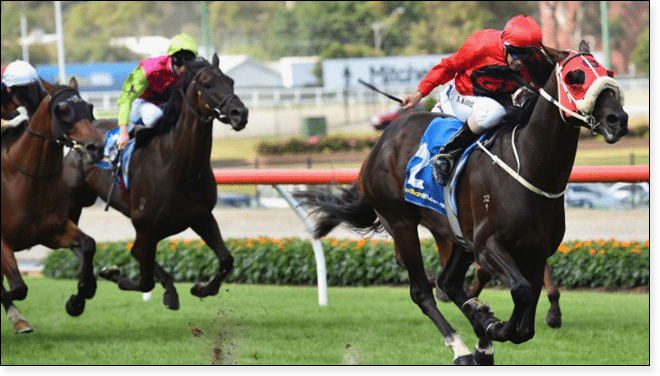 RICHARD Laming might not hold the star profile with the likes of Chris Waller, Mick Price and John O’Shea, but he does have a team of loyal owners which were rewarded when Wales won the Campolina Benchmark 78 at Moonee Valley last Saturday.

Among the army of owners is the G1 Crown Racing Syndicate which would have been happy with the $8 being offered at CrownBet.com.au. Laming states the group didn’t turn away from wanting to be involved with a staying type.

“I train a few horses for them and when I asked if they wanted to get involved with a stayer they said yes,” Laming said.

The former New Zealand-based trainer has been in Australia for a couple of years and is looking to further establish his Victorian stables, and that profile could come via the troubled Wales which had only its 16th start as a six-year-old.

The son of Redoute’s Choice was a $310,000 purchase at the Inglis Easter Yearling Sale by Rogerson Bloodstock and it showed good early promise after winning its first two career starts, but after some poor efforts, former owner Lloyd Williams sold the horse for $50,000 at his dispersal sale in March last year.

The half-brother to three-time Melbourne Cup winner Makybe Diva will now be aimed towards the $200,000 Hobart Cup on February 8 before looking towards the 3200-metre Adelaide Cup in March.

“He went down to the beach and has been there for a few days.

“Now he’ll head to Tasmania for the Hobart Cup then more than likely go to the Adelaide Cup.

It hasn’t been easy going for Laming who has had Wales for 10 starts. Saturday’s victory was his first success with Wales although it went close to winning the Ballarat Cup last November behind the Chris Waller-trained Junoob.

“That put the writing on the wall that he’s got a good race in him,” Laming said.

“He was strong through the line in the Ballarat Cup and I can’t see it being an issue. I really think he’ll be a two-miler.

After winning its second race for Robert Hickmott at Macedon Lodge, Wales spent almost two years off the track due to various injuries and Laming thinks the beach has helped with that.

“It’s taken me a while but I’m starting to work him out,” Laming said.

“He’s a six-year-old stallion so I have to change things up.”

After Saturday’s win, Laming traveled back to his homeland of New Zealand for the 2016 Karaka Yearling Sale where he purchased a bay colt by Super Easy x Shanpanichi for $55,000 on behalf of Laming Racing and Blue Moon Racing.

Sign-up with Crownbet and claim up to $600 in bonus bets upon making your first deposit.