Waikuku looks to bounce back against Beauty Generation 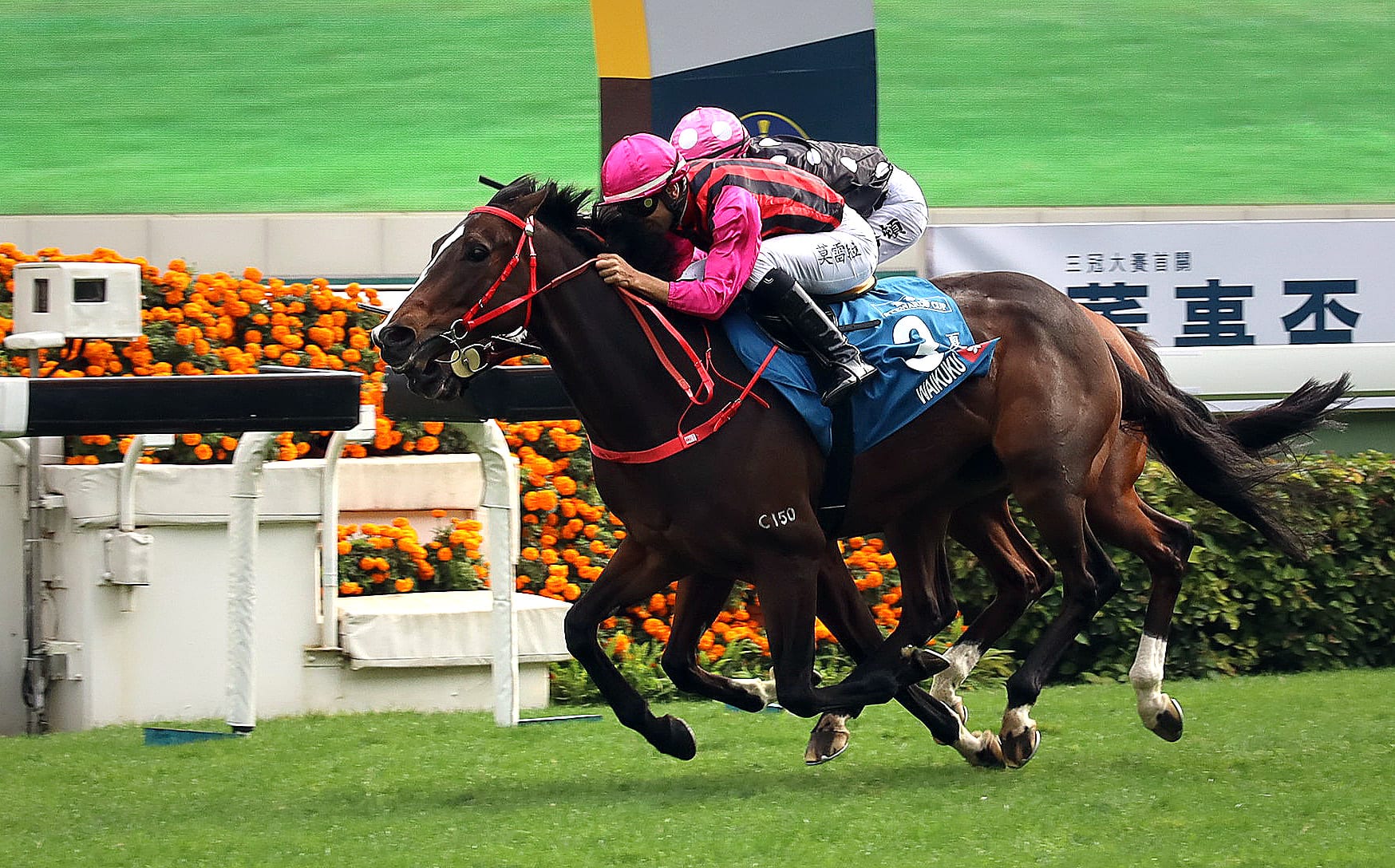 If any horse can stop Beauty Generation from winning a record third FWD Group 1 Champions Mile at Sha Tin on Sunday, 26 April, the form book suggests it’s most likely to be Waikuku.

“He’s a very good horse and he has done well already this season so there’s no doubt he’s a winning chance,” jockey Joao Moreira said.

The Irish import has finished ahead of the champion four times this season, notably when successful in the Group 1 Stewards’ Cup (1600m) and Group 2 Jockey Club Mile, and again when second over the big horse’s third in the Group 1 LONGINES Hong Kong Mile; but book-ending those results are two telling wins in the Beauty Generation ledger.

On the front end is the Horse of the Year’s demolition of the John Size-trained Waikuku and all others in the Group 3 Celebration Cup Handicap (1400m), carrying top-weight and conceding upwards of 14lb to his rivals. The latest clash, in the Group 2 Chairman’s Trophy (1600m), was supposed to be a match between the two following Beauty Generation’s renaissance victory in the Group 1 Queen’s Silver Jubilee Cup (1400m) – but it was one-sided as Waikuku faltered to a lacklustre sixth.

“I hope he can bounce back,” Moreira said. “My conversation with John Size lately has been that usually when good horses do what he has done they eventually come to a flat spot and it could be the reason for his poor run last start.”

Waikuku’s handler, Hong Kong’s 11-time champion trainer, is under no illusions as to the task his talented five-year-old faces against the world champion miler, one of the Hong Kong circuit’s all-time greats.

“Beauty Generation is the outstanding horse, of course, because he has the ability and the constitution to repeat his runs every time he comes to the races, so that’s a sign that he’s a better class of horse,” Size said.

“I saw him in the parade ring last start and he looked magnificent so I would expect him to come to the races in the same condition – I haven’t seen him around since but he’s just an outstanding racehorse.”

No one would be queueing to argue with Size on those observations. But Waikuku has demonstrated in his career so far that he is a talent capable on his day of mixing it with the very best – that being so, his most recent effort was below expectations.

“I don’t think anything went wrong for him in the Chairman’s Trophy,” Size said. “He had two very strong races in the Hong Kong Mile and the Stewards’ Cup and he might have felt that. He had a break after and maybe just needed a race to bring him back into form.

“These Group 1 races are a lot of work for him, this is his outer limits, so for him to run two big races in a row at Group 1 level it sapped his energy. We’ll see how we go – he hasn’t got any problems or anything it’s just a matter of what energy he’s got left to finish off the season with.”

There was moisture in the ground when Waikuku ran below par in the Chairman’s Trophy and the wet weather Hong Kong is experiencing going into the weekend is a concern to Size.

“I don’t think he likes it, I think he’s a better horse on top of the ground and I’d be surprised if the rain helped him,” he said.

The handler was positive about the Harbour Watch gelding’s draw in gate eight.

“I think we’ll be ok, probably go back in the field a little bit and then race similar to how he did in the Hong Kong Mile,” he said.

The field of eight also features the Tony Cruz-trained Ka Ying Star. Antoine Hamelin’s mount has been thereabouts in all the top mile races this term and placed second to Beauty Generation in the Queen’s Silver Jubilee Cup and Chairman’s Trophy, as well as third to Waikuku in the Stewards’ Cup.

“Ka Ying Star’s facing Beauty Generation again but maybe for once he’ll beat the big horse – he’s always about half a length off him so I hope this will be the day he gets his head in front,” Cruz said.

The gelding looked to be in fine fettle as he cantered in the Cruz string at Sha Tin yesterday morning (Friday, 24 April).

“He’ll handle any ground, he’s won on softer going in England so I’m sure he’ll run well if this rain continues into Sunday,” the handler added.

The FWD Champions Mile is one of three Group 1 races at Sha Tin this weekend, alongside the FWD QEII Cup (2000m) and the Chairman’s Sprint Prize (1200m).