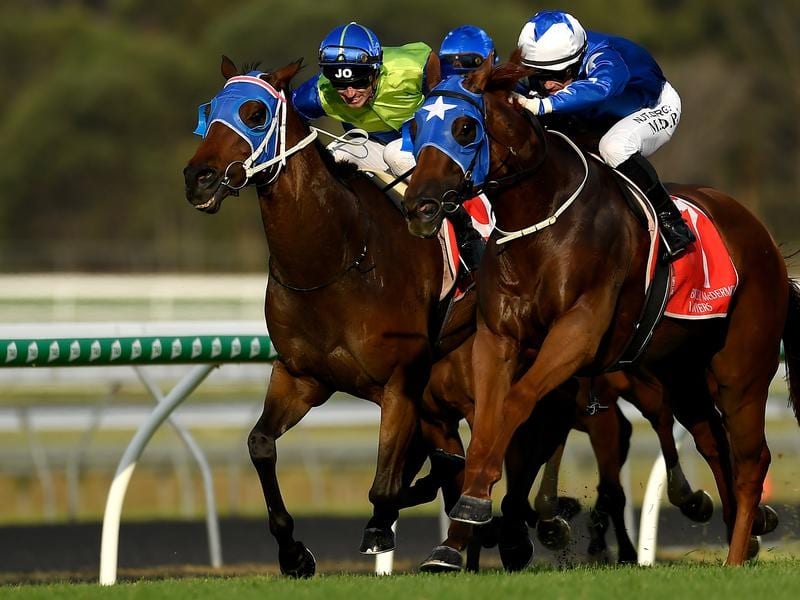 Toowoomba galloper Tycoon Ace has made up for his last start at the Sunshine Coast when he scored a fighting win in the $105,000 Swiss Ace Plate.

Tycoon Ace has been a consistent horse but at his last start before a spell he started a short-priced favourite and finished last in an open over 1000m at the Sunshine Coast.

However, on Saturday Tycoon Ace ($15) showed his true ability over the distance when he won a slog over the final 100m to beat the favourite Meet Mr Taylor ($2.80) by a half head with three-quarters of a length to Tarzan ($3) in third place.

Tony Sears trains Tycoon Ace in partnership with his daughter Maddy and it was their biggest win since taking out a partnership two months ago.

“I can’t take any credit as I have been in Singapore for ten days. Maddy has done a great job with him,” Tony Sears said.

“She had a set back when she sliced her arm recently but it must be OK because she was throwing it around as they battled out the last 100m.”

Tycoon Ace was a top performer last winter, running second in the Queensland Lightning and Weetwood Handicap and winning the Bat Out Of Hell.

“He never seems to get mentioned in pre-race predictions but apart from his last start at Caloundra he has been very consistent,” Sears said.

“Funny thing the only two bad runs he has had were at Caloundra on heavy tracks,” Tony Sears said.

“When there was a storm that put the races back I was worried but the track has held up well.”

Tycoon Ace took his prize money to $410,000 with the win but Sears is undecided which way to go for a next start.

“He isn’t a Magic Millions horse as he is home bred. But there plenty of stakes races for him,” he said.

Trainer Kelly Schweida was happy with the run of Meet Mr Taylor who was involved in a three way battle for the lead to the 300m.

“He really tried again and you can’t ask for more,” he said.

Trainer Stuart Kendrick said Tarzan had been far from disgraced as he had been forced to run three wide throughout.

“It was again a case of barriers telling the tale,” he said.