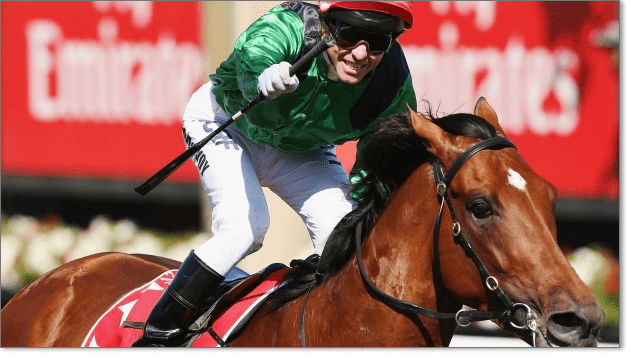 The Murray Baker-trained four-year-old held off a strong finish from Politeness to win the $1 million feature. It was a bittersweet victory for Baker, who was forced to scratch stablemate Mongolian Khan from the Melbourne Cup after a bout of colic the previous week.

Regular rider Opie Bosson missed the ride due to suspension and Kerrin McEvoy was pleased to take over the duties on Saturday.

“It’s a lucky pick-up for me and he’s done the job nicely.”

“I rode him for the first time on Thursday morning and he’s just a bold going Kiwi.

“He likes to get out there and make every post a winner.

“I was a little bit worried halfway because he was going boldly in my hands, but he gave a good kick at the 600 (metres), another kick at the 300 (metres) and he was too strong for them.”

Murray Baker will now consider a trip to Hong Kong for the International Mile on December 13 where it could possibly take on local champion Able Friend, which is currently the $1.60 favourite at CrownBet.com.au.

“He’s a good tough horse, he can run those sectionals and always makes it hard for horses behind him,” Baker said.

What the 2015 Emirates Stakes jockeys said

“He’s tough, so tough, he’s tough and honest. It’s hard to lead at Flemington in a Group I, a lot different to Moonee Valley, and he was a little bit aggressive in front but it was only the last 20 yards he started to feel the pinch. He’s just a pure miler that does it the tough way and does it very well.”

“She ran outstanding, was probably a bit stiff. We wanted to get to the outside to make our run but I had a babysitter (to my outside) three parts of the run and just had to thread the needle. She got held up at the top of the straight which probably cost her and on the line the winner was holding her but she was pretty stiff.”

“Terrific effort. Still a bit raw the horse and will be better in the autumn.”

Australian punters might see another Kiwi runner next year with Xtravagant being targeted for the 2016 Australian Guineas.

The Te Akau runner scored an emphatic 8.5-length win in the Group 1 2000 Guineas at Riccarton on Saturday and now it’s being prepared for the ultimate goal of the 2016 Australian Guineas.

“He’ll have a couple of weeks out at Te Akau and we’ll bring him back and get him up for the Levin Classic,” co-trainer Stephen Autridge said.

“That’s over 1600 metres and it’s another Group I so it’s a race that fits well.

“If it’s all going the right way he’ll have one more start here and then go to Melbourne for the Australian Guineas. You win that and you’ve got a stallion for sure.

“All I know is he’s a very exciting galloper and we’re all looking forward to what lies ahead for him.”

Xtravagant could continue a good run for New Zealand-trained runners in Australia which has included the likes of Mongolian Khan and Turn Me Loose.