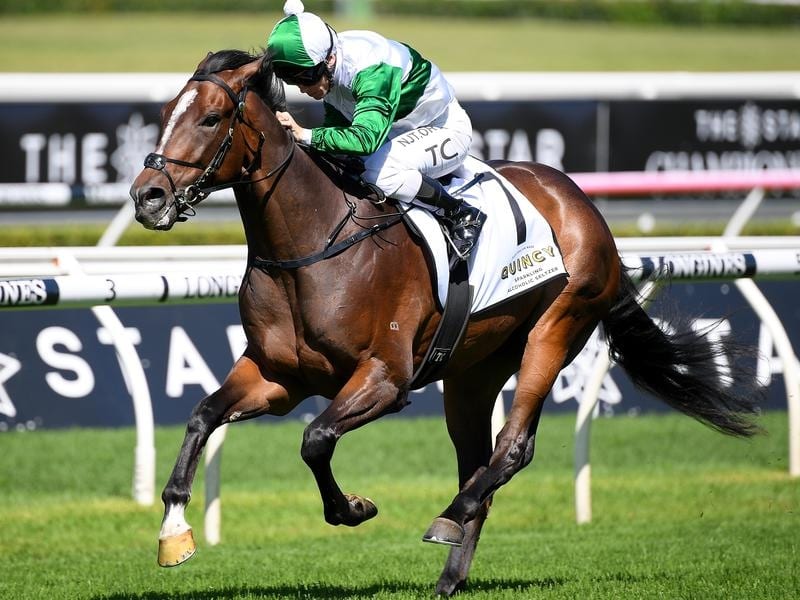 The stable has won three Group One races in as many weeks, including the Golden Slipper courtesy of Farnan, with Entente adding a Group Three to that haul.

The three-year-old broke his maiden at Hawkesbury last start and capably handled the rise in grade to lead throughout in Saturday’s Carbine Club Stakes (1600m).

Co-trainer Bott said the stable originally had Queensland Derby aspirations for Entente but were forced to rejig plans due to the cancellation of the Brisbane winter carnival as a result of the coronavirus pandemic.

“He is a horse we originally had pencilled in for the Queensland Derby and we obviously had to rethink and change those plans pretty quickly,” Bott said.

“That’s the main reason he is here today and it has worked out well for him.”

Tim Clark took Entente ($17) straight to the front and he kicked on straightening, fending off Bottega ($12), who emerged from the pack to get within a half-neck of the winner on the line.

Power Scheme ($14) raced on speed and held on for third another 1-1/2 lengths away while favourite Reloaded finished a disappointing fifth.

Bott felt Entente’s fitness was the difference, particularly on the heavy track.

“With the conditions today, that certainly worked in his favour,” Bott said.

“Coming from an 1800-metre maiden and just dropping back to the mile, in the testing track conditions you needed a strong, fit horse and that’s certainly what he was today.”

Entente is likely to head to the Frank Packer Plate (2000m) at Randwick in two weeks and Clark has no doubt he can continue his rise through the grades.

He believes the horse has switched on since being gelded.

“That was a good performance. The penny has started to drop with him,” Clark said.

“Now that he is going about his races in the right manner, there is no reason why he can’t continue going right through his grades.”