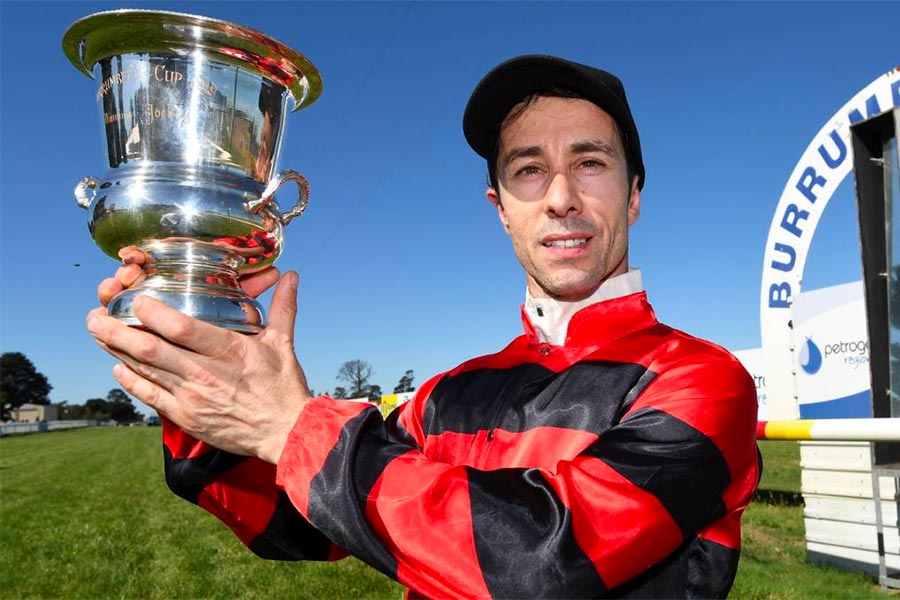 It has been a relatively slow start to the 2022/23 Alice Springs racing season for Stan Tsaikos, but the Darwin-based jockey hit back in style on Sunday with a winning treble.

Tsaikos, the champion jockey in the Red Centre for the past two seasons, won the opening two races on the six-event program before taking out the feature race at the end of the day.

Lisa Whittle’s five-year-old gelding Love To Love ($8) got the ball rolling over 1200m (0-58) before Tsaikos made it back to back wins on five-year-old mare Phantom Court for Kerry Petrick in yet another race over 1200m for the 0-58 class.

To cap off a super day, the former Victorian jockey piloted the Leanne Gillett-trained five-year-old gelding Bench Press to his fourth win from as many starts over 1400m at Benchmark 76 level.

Securing a winning lead after hitting the front once turning for home aboard Love To Love and Phantom Court, Tsaikos cooled his heels behind the leaders before Bench Press producing a winning burst in the home straight.

Tsaikos, the regular rider for the Gillett stable, has been untouchable at Pioneer Park in recent years and after sealing the 2020/21 jockeys’ premiership with 24 winners he posted 35 winners last season to successfully defend his title.

He was also the leading jockey in the NT for the 2021/22 season with 53 winners, and after his three wins on Sunday he is now outright third in the jockey standings with eight winners.

Sonja Wiseman, who also rode a winner on the Alice Springs Turf Club’s card, leads the way in the Red Centre with 16 winners from Jessie Philpot (9) with Phillip Crich (7), another successful rider on Sunday, and Casey Hunter (6) completing the top five.

The win by Bench Press, who has an outstanding record at Pioneer Park after arriving from Victoria, was clearly the highlight for Tsaikos after edging out the in-form Roughly (Sonja Wiseman) from the Paul Gardner stable.

Unbeaten in two starts over 1400m and two starts over 1600m in recent weeks, the 10-year-old mare Roughly was going to prove stiff opposition if she was able to work her way to the front at the start as she can prove hard to run down.

Roughly did hold an early lead before being relegated to third place once turning into the back straight when Dick Leech’s Lunch Session (Paul Denton) took charge as the leader from Terry Gillett’s Supreme Times (Jarrod Todd).

Bench Press, who went into the race with a record of 9: 4-5-0 in the Alice, was sitting comfortably in fourth place before Tsaikos flicked the switch at the 600m once exiting the back straight.

Roughly, three wide, and Bench Press, four wide, made their move down the side in their quest to catch the leading pair and with four horses spread across the track once turning for home it made for an exciting final 300m.

Lunch Session held sway on the fence with Supreme Times on its outside, while Roughly had Bench Press on her outside.

With 200m to go Lunch Session lost touch and it was on for young an old in the closing stages before Bench Press (55kg) kicked clear to overcome Roughly (62kg) by two lengths, with Supreme Times a further length and a half away in third place.

Bench Press and Roughly bumped halfway down the straight, and although the mare was slightly disadvantaged it didn’t necessarily affect the result as the gelding had the momentum and was finishing with a wet sail.

Roughly didn’t lose any admirers and spotting the winner 7kg was significant, but the Gillett stable has a promising prospect in Bench Press – nominated for the 2022 Alice Springs Stayer of the Year award – and even at this early stage he is one to watch for the 2023 Alice Springs Cup Carnival.

After two poor results after arriving at the Whittle stable, Love To Love saluted over 1200m (Class 2) on the last Saturday in November before backing up a week later to edge out Greg Connor’s fast-finishing Chopsticks (Philpot) by a nose with Dick Leech’s Lethal Encounter (Todd) running on late for third.

Phantom Court was making his Pioneer Park debut after a last start 11th on Darwin Cup Day on August 1, but that proved no issue as he was far too good overcoming stablemate Real Devine (Crich) and Terry Gillett’s runner City Jet (Todd) – both placegetters finished with zest.

Meanwhile, Russell Bell’s red-hot five-year-old gelding Delago Lad (Crich) made it four wins from as many starts since arriving from South Australia when he hit the front once turning for home after sitting three wide before prevailing over 1100m (0-64).

The issue was never in doubt with 200m to go, although Greg Connor’s Radio Room (Philpot), starting at $17, finished strongly after a three-month break to grab second place with Leanne Gillett’s Esashi (Tsaikos) a distant third.

After sitting in second place for most of the race, Paul Gardner’s eight-year-old gelding and $3.30 favourite Fair Go (Wiseman) finally delivered in his fourth Red Centre start when he kicked clear in the home straight to overcome Will Savage’s $4.80 chance Mi Mijo (Hunter) and the winner’s stablemate Hard Work Rewards (Lek Maloney), starting at $8, over 1400m (BM54).

The Kevin Lamprecht-trained $3.80 fancy Rupert’s Delight (Ianish Luximon), a beaten $2.50 favourite on his NT debut when he blinked before finishing a narrow third a fortnight ago, made amends when he left his rivals in his wake in an 1100m maiden with Lisa Whittle’s Vega Prince (Wiseman) and Russell Bell’s $11 candidate Iamelle (Philpot) filling the minor placings.

For Vega Prince, it was the fifth occasion he had finished second his past six starts – he has finished third twice and fourth in his other NT starts as he continues to search for that elusive win.