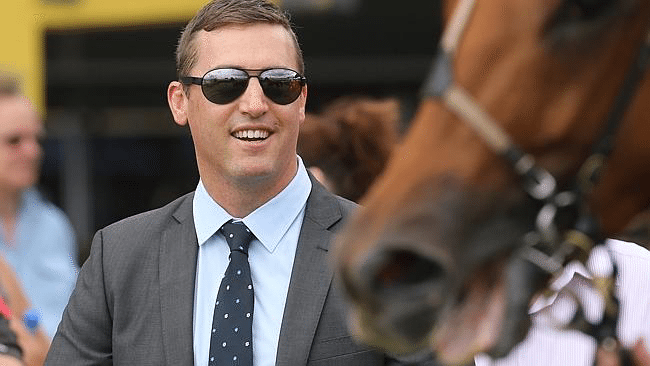 CHAMPION Queensland trainer Tony Gollan has clinched his third Brisbane trainer’s premiership and is odds-on to repeat the feat in the 2016/2017 season.

Gollan notched up 87.5 winners this season, which broke his own record of 79 he set the season prior, and he also had 107 state-wide wins in Queensland.

He now wants to extend his record and set a target of 100 winners in Brisbane and 150 in Queensland, which makes the $1.20 at Sportsbet.com.au for Gollan to win the Queensland Metro Premiership a sure thing.

“Any season where you train more winners than the past season is a good one,” Gollan said.

“It is a credit to my staff and we have had our problems training at Eagle Farm during the redevelopment.

“It is only going to get better when all the in-field stabling is complete, but this season is over so I will front up to Doomben on Wednesday ready to defend the title. It is going to be a very busy year.”

Gollan is predicting an even better season and will be trying to branch out in Sydney. He has had some recent success in Sydney with Dee Nine Elle, which has one win and two placings from three starts.

“It is all about getting the right things in place and then the winners should follow,” Gollan said.

“Everything is going along and I am hopeful it will work out. It shows we have competitive horses and can compete there (Sydney).”

Robert Heathcote is on the second line of betting at $4.40 with any other trainer quoted at $11.

Class filly Minding might not have won as easily as some had predicted last Saturday morning, but it got the job done and has subsequently firmed in the Prix de L’arc de Triomphe betting.

The Aidan O’Brien-trained filly was the $1.20 favourite for the Group 1 Qatar Nassau Stakes at Goodwood and many expected an easy win, but top jockey Ryan Moore had to call upon its reserves after being shut out by rival jockey James Doyle at a crucial stage.

Minding, however, showed its class by sprinting late and securing the 1.25-length win – it’s sixth group one win.

“It was always going to be a messy sort of race,” Moore said. “I just tried to keep it as simple as I could. She was only doing what she had to do.

“She’s run in seven group one’s in a row and has won six – she is a very special filly.”

Minding firmed into $8 at Sportsbet.com.au for the Arc and whilst O’Brien hasn’t confirmed a start in the French feature, the Ballydoyle filly will likely contend on October 3.

“I’m delighted with his filly,” O’Brien said. “She’s thriving from race-to-race at the moment and is physically very strong. She loves racing and has a super mind. It all comes alike to her – she’s very versatile. She’s a real professional and conserves herself, doing only what she has to do.

“There are a lot of options open to her and she is ready to go down most roads.”

Most punters were predicting trainer Gerald Ryan to nominate the unbeaten Tango Rain for the Listed Rosebud Stakes at Randwick this Saturday, but instead will line up a recent provincial winner.

Ryan will line up Uthred which broke its maiden status at Kembla Grange after running second at Wyong behind Hair Trigger and he believes the gelding isn’t out of its depth.

“He finished second at Wyong on debut to Hair Trigger, who has since run third behind Tango Rain and Thronum at Canterbury,” Ryan said.

“The he came out and won at Kembla, beating First Approval, who won again on the weekend.

“He might only be a provincial maiden winner but he’s got the right form lines for this race.”

Gai Waterhouse lines up Thronum which looked unlucky last start and instead of heading straight to the Run To The Rose, Waterhouse will take the opportunity to pick up a stakes race.

“He’s done extremely well since his last run and we’re just sorting out a jockey for him for this weekend,” Waterhouse said.

Tommy Berry will likely take the ride aboard Thronum whilst Tim Clark has been linked to ride Uthred.