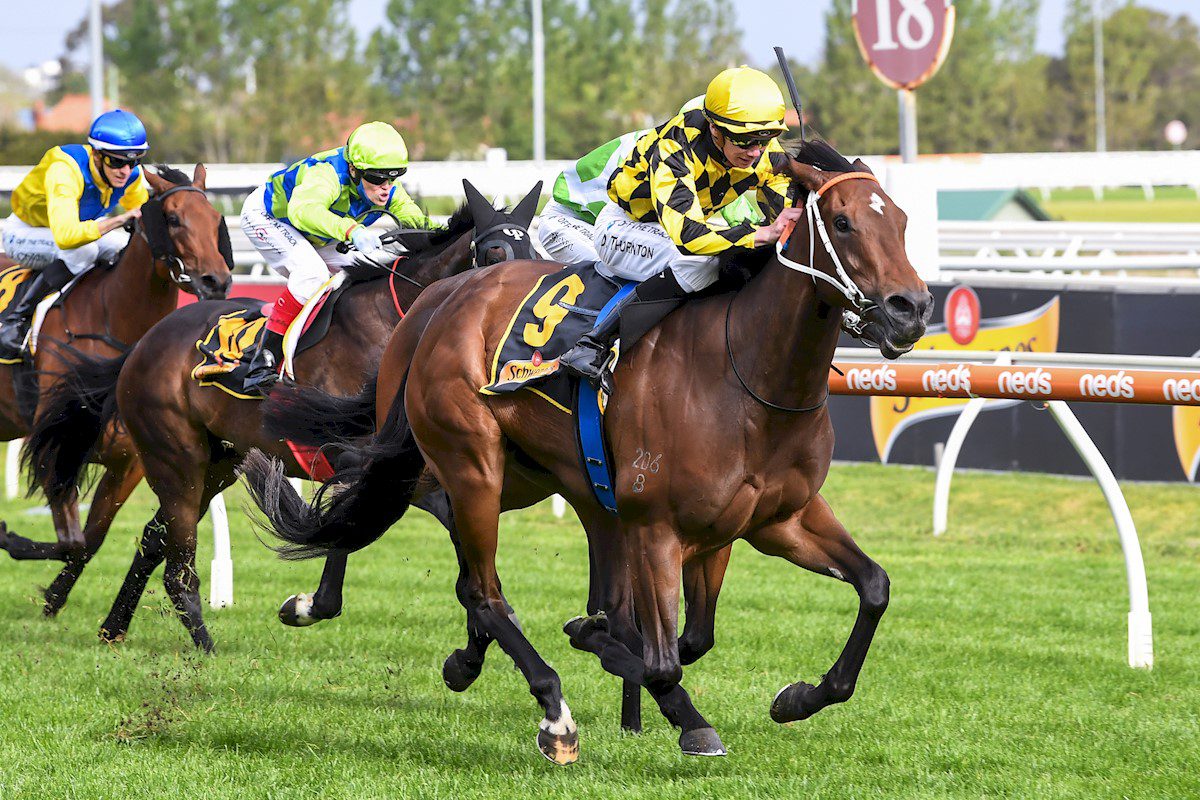 There was plenty of talk in the build-up to Wednesday’s Thousand Guineas at Caulfield as to whether Sydney form was better than Melbourne form, but in the end it was a Newcastle maiden winner who stole the show as Yearning delivered Damien Thornton his second Group 1 victory.

The well-bred filly (Snitzel x Rising Romance) had already had six starts in her career, placing second on debut at Randwick-Kensington, claiming her first win at start five, and then running a narrow second to Elusive Express in the Group 2 Edward Manifold Stakes at Flemington two weeks back.

Sent out as a $26 chance, the Michael, Wayne & John Hawkes-trained runner settled at the tail of the field and looped her rivals to win by a length, turning the tables on Elusive Express, with VRC Oaks favourite Barb Raider in third.

“She’s worth a lot of money, but it’s good for those expensive horses to actually win,” co-trainer Wayne Hawkes told Racing.com post-race.

After jumping relatively well from barrier seven, Yearning was held at the back of the field under Thornton in the famous Arrowfield Stud silks, and Hawkes labelled it a “good ride”.

“Zouzarella was obviously one of the ones to beat and it was back out there and all of a sudden – we jumped well – but we were back last,” he said.

“He (Thornton) didn’t panic; a lot of them would’ve panicked and thought ‘oh, here we go’.

“The rest is history.”

No further plan is set in stone for Yearning this Spring Carnival, although her trainer suggested she could head towards the Empire Rose Stakes on Derby Day against older mares or stay in her own age group in the VRC Oaks.

“We just wanted to see how she ran today,” the trainer said.

“Her run was really good the other day; she got held up, held up, and then she let rip.

“The truth of the matter is that when she hit the front she sort of half got lost and she was on her Sydney leg, whereas today I thought was she on her Melbourne leg and she was.

“All credit goes to Damien; he was cool, calm and collected and he got the job done.”

Thornton piloted Toffee Tongue to an Australasian Oaks win in 2020 and now, 18 months later, has notched up another Group 1 victory in a three-year-old fillies’ classic.

While the victory came easily in the end, he admitted post-race that it did not play out the way he expected.

“I thought we’d be a little bit closer than what we were, albeit I knew it looked to be good pressure in the race,” the jockey said.

“That’s what Wayne said pre-race, he said ‘I don’t care where you are, just get her to travel, find a rhythm, keep her balanced and go from there’.

“I just helped her begin as best I could and then just let her tell me where she wanted to be.

“I was on the back of Zouzarella and it didn’t look like it was going to get through, so I followed Jye (McNeil aboard Elusive Express) around the field, he was one of the ones to beat so he took me into the race nicely and then she did the rest from the top of the straight.”

The victory saw the filly firm into $6.50 in the VRC Oaks, while runner-up Elusive Express is now the $5 favourite ahead of Barb Raider, Kapalua Sunset and Yearning in the 2500m feature.