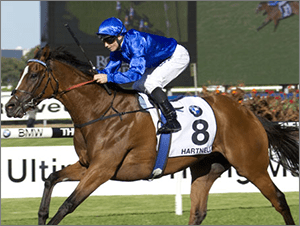 THE $1.6 million Group 1 Sydney Cup field has been locked in with Hartnell the dominating favourite.

The John O’Shea-trained gelding came to Australia with the 2015 Melbourne Cup in mind and the Sydney Cup is always a good guide to the Melbourne Spring carnival.

The four-year-old has won its last two, with the latter coming in the Group 1 BMW, where it out-toughed Japanese star To the World and the 2015 Sydney Cup already looks Hartnell’s for the taking.

The son of Authorized won over 3218 metres at Ascot in June last year and the 3200-metre Sydney Cup distance won’t hold any fears, and punters agree.

It opened with bookmaker Sportsbet.com.au at $2.70 but has been hammered in the market since – currently sitting at $2.30 and will likely shorten throughout the week.

In-form jockey Tommy Berry – who has won the Group 1 Galaxy aboard Sweet Idea and the Group 1 Golden Slipper with Vancouver already this Autumn – will take the ride at a luxury weight of 52kg, which is 6kg less than 2014 Melbourne Cup winner Protectionist.

The Kris Lees-trained Protectionist hasn’t quite come back in fine order, but bookmakers are confident it will produce a better run in the Sydney Cup.

CrownBet.com.au installed the five-year-old on the third line of betting at $5.50 and it has already been punted into $5.

The extra distance will suit and we know it can run a strong two-miles, so punters are giving the classy runner another chance.

Who Shot Thebarman has been well-fancied on the second line of betting at $4.50 after a strong performance for fourth in The BMW last start.

The six-year-old showed its class by running third in the 2014 Melbourne Cup and this distance, coupled with the easing conditions of the track, will suit it perfectly.

After opening at $4.50, its price fluctuated out to $4.80, back into $4.60 and has now settled back at its opening price. Punters aren’t entirely sure if it can turn the tables on Hartnell, but it’s a solid place chance at $1.55 with CrownBet.com.au.

Red Cadeaux was originally set to run in the Group 1 Sydney Cup, but will instead take its place in the Queen Elizabeth Stakes.

The Ed Dunlop-trained nine-year-old has placed in the Melbourne Cup on four occasions and it was assumed that it would run in the Sydney Cup (3200 metres), but it will run in the $4 million Queen Elizabeth Stakes instead.

“The decision has been made to run Red Cadeaux in the Queen Elizabeth Stakes, as opposed to the Sydney Cup, at Randwick on Saturday,” Dunlop said on his website.

“The excellent Kerrin McEvoy will ride as Hugh Bowman is set to partner Lucia Valentina.

“The weather has been the overriding factor in our decision, with Sydney having experienced an extremely wet week.”

“Obviously Contributer and Adelaide will be tough to beat, but the Sydney Cup is a vintage renewal in itself with Protectionist, Who Shot Thebarman and the well-weighted Hartnell in the line-up,” Dunlop said.

“Hopefully we have made the right call.”