The big winners of the 2015 Melbourne Spring Racing Carnival 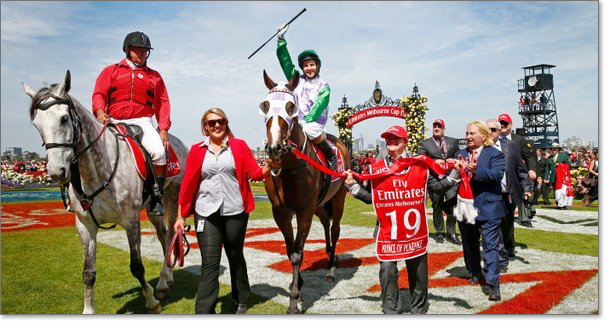 THE 2015 Melbourne Spring Carnival proved to be a happy hunting ground for horses from all around the globe.

It all kicked off on Caulfield Cup day where the New Zealand-trained Mongolian Khan justified favouritism by winning the 2015 Caulfield Cup.

The Murray Baker-trained runner was at the head of the market and it showed its class by beating a very good field.

It wasn’t all happy times for Mongolian Khan, however, as it suffered a bout of colic in preparation for the Melbourne Cup and was subsequently scratched from the $6 million race. Baker would later taste success with Turn Me Loose in the Group 1 Emirates.

The 4.75-length win was the fastest in history and the world is now Winx’s oyster. We’re unsure where the mare will go from here, but punters who backed it early at $6 with Sportsbet.com.au were very happy to start their carnival with a massive return.

A week later the Group 1 Mackinnon and Victoria Derby were run at Flemington with an international taking out the $1 million Mackinnon.

French-trained runner Gailo Chop was unplaced a week prior in the Cox Plate, but it proved too classy for its rivals in the Mackinnon and it will return to France as an Australian Group 1 winner.

Punters then shifted their attention to the VRC Derby where Tarzino was the subject of some fairly big bets. The Mick Price-trained colt was backed heavily from $4 into $2.90 and, even though there was an obvious front-running track bias at Flemington, Tarzino simply proved too good for its rivals.

The son of Tavistock stalked the pace heading into the straight before letting down with a sustained sprint down the lengthy Flemington straight. It quickly picked them up and went to the line strongly, giving punters their first major win of the carnival.

The 2015 Melbourne Cup quickly rolled around and the bookmakers haven’t stopped smiling since as Prince of Penzance created history and caused a massive boilover at odds that ranged from $65 to $101.

Michelle Payne created history by becoming the first female jockey to win the Melbourne Cup and it also gave master trainer Darren Weir his first Cup victory. The half-length win for Prince of Penzance was guided by a beautifully-timed ride by Payne, who upon winning told all those that wanted to kick her off to “get stuffed”.

Sticking with the ladies, last Thursday was Oaks day where Jameka was too strong for a very even field. There was an early three-way betting duel between Jameka, Sacred Eye and Ambience, but early Oaks favourite Sacred Eye got the blows in the betting and drifted out to the fourth elect with Pasadena Girl firming into $6.

Jameka scored an easy win in the heavy track conditions and will now likely contest the major races throughout the 2016 Championships at Randwick.

The final day of the carnival brought Flemington’s racing to a close with two Group 1’s on the card. Chautauqua was the raging hot favourite to win the $1 million Darley Classic, but a gun ride from James McDonald dashed their dreams.

Delectation looked a good chance coming into the 1200-metre sprint, but due to all the money on the favourite, punters were able to snap up $13 for the Chris Waller-trained gelding. With C C Lai being the owner, Delecation is a candidate to race in Hong Kong later this year.

The final Group 1 was the Emirates Stakes and the Kiwis were hopeful to take some of the riches across the Tasman. Those wishes came true as Turn Me Loose held out a strong finishing Politeness to score by a half-head.

The Murray Baker-trained multiple Group 1 winner put a string of wins together in Australia and will no doubt return next Autumn for The Championships.

Buffering to contest Group 1 in Perth

Buffering finished fourth behind Delectation in the Group 1 Darley Classic at Flemington and it will now make the trip to Perth for the Group 1 Winterbottom Stakes on November 21.

The Robert Heathcote-trained sprinter won the Winterbottom in 2013, but missed it last year due to injury. Both Heathcote and jockey Damian Browne were over the moon with its effort for fourth last Saturday.

“It was a huge effort,” Heathcote said.

“He’s racing with all of the enthusiasm and zest that he’s always had.

“A hundred [metres] out, he had them but he’s just felt the pinch in the last little bit.

“We’ll definitely take him to Perth. On that run, and they’re the best in the world, and he’s half a length off them, he’ll definitely run well in Perth.”

Buffering is on the second line of betting at $6, which probably won’t last long. Current favourite is Lucky Street which won well on Saturday, but hasn’t faced the quality of Buffering in any of its starts.

Red Cadeaux to stay in Australia

Much loved thoroughbred Red Cadeaux will stay in Australia after coming through surgery in good order after breaking down in the Melbourne Cup.

The Ed Dunlop-trained 10-year-old failed to finish the 3200-metre race after suffering a fetlock injury. Dunlop is back in Newmarket, but posted an update earlier this week.

“I spoke with my travelling head lad Robin Trevor-Jones this morning (Sunday) and he said he’s happy with Red Cadeaux and how he’s come through his surgery and he’s well on the mend,” Dunlop said.

“We have been inundated with offers from all over the world to re-home him and it’s important for all concerned that he’s found a decent home after his achievements in which he won just shy of £5 million.

“We are in discussions to transfer him to Living Legends which is near Melbourne and where hopefully he will prove a popular attraction.”

Red Cadeaux fractured a sesamoid in its near fore fetlock and was pulled up by a distraught Gerald Mosse.

“I can’t stress enough the role the vets at Flemington racecourse as well as the University of Melbourne Veterinary Centre played and well done to all,” Dunlop said.

“Obviously his rehabilitation is ongoing and it will be some time until he’s ready to be moved, but he won’t be coming home.”

Punters that took the shorts around Chautauqua on the weekend might not want to climb into the $1.80 on offer for the International Sprint at Sha Tin on December 13.

The Hawkes-trained runner was heavily backed at Flemington on Saturday, but it came out second best behind Delectation.

The next best is Gold Fun at $5.50, followed by the Joe Pride-trained Terravista at $7. Former Australian runner Not Listenintome is currently quoted at $21.

“We know how good he is and he should easily measure up to the challenge of taking on Hong Kong’s best sprinters.”