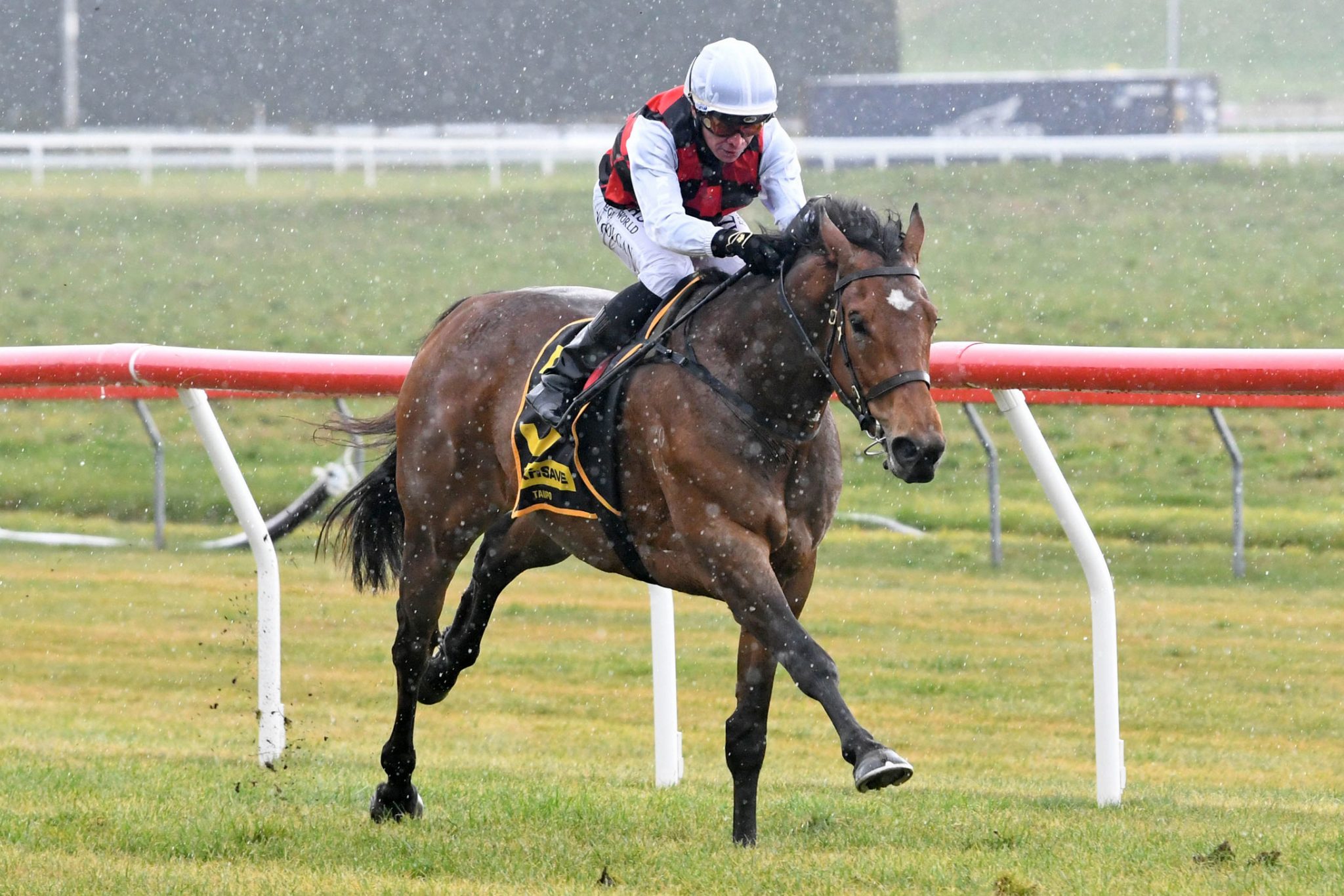 Promising three-year-old Te Toki made an emphatic start to his career when successful at Taupo on Wednesday in the Ribchester @ Haunui Farm 1300m.

The much-hyped son of Tarzino had impressed in all three of his trials over the past 10 months and duly backed it up on raceday when winning by more than six lengths.

Prepared by Simon and Katrina Alexander, the Matamata couple, who own equity in the smart youngster, admitted there had been plenty of offshore interest in the gelding dating back to December last year.

“When you turn down a lot of money for a horse initially and then go again, there is always some risk, so there was some relief in seeing him win today, but we were expecting him to win. We think he is a very good horse,” Simon Alexander said.

“We possibly see him being a very good miler in the spring. I think a 2000 Guineas (Group 1, 1600m) at Riccarton would be right up his alley if the track was decent.

“If you get around Taupo as a big striding horse like that, he has done very well and a roomy track like Riccarton would suit.”

The Group 2 Dundeel At Arrowfield Hawke’s Bay Guineas (1400m) on October 2 could potentially be the next target for Te Toki, who is a half-brother to exciting Hong Kong galloper Packing Victory, unbeaten in two starts for Danny Shum.

“We will see how he pulls up and then have a think about whether we still own him, which will be the hardest thing,” Alexander said.

“We would love to race a horse like this, but the reality is other parts of the world want to race these horses more than what we can afford to do.”

Katrina Alexander said they had turned down initial offers knowing what a rarity they had on their hands.

“He is the full package. He is a very trainable horse with a great brain and a great attitude and obviously the ability. He is a very relaxed customer as well, so there are a lot of options for him and horses like him don’t come along every day,” she said.

The Alexanders had last season’s Group 1 New Zealand 1000 Guineas (1600m) favourite Tinker Mcphee, who raced without luck when fourth in the Riccarton feature, but said the filly was a different style of galloper to Te Toki.

“This horse is only going to get better with some age on him. In particular after Christmas, you will see where he truly sits in the program,” Katrina Alexander said.

“Tinker McPhee was a brilliant filly and going forward this horse has probably got more scope.”

The Alexanders have had an association with Westbury Stud since returning to training two seasons ago after a five-year hiatus. Having prepared Ready To Run gallopers for the Gerry Harvey-owned nursery, they have been impressed with the stock of Tarzino.

“We have had a chance to look at some of his stock and we actually have quite a nice Tarzino being prepared for the Ready To Runs this year as well,” Alexander said.

“He is a slightly different mold, but a very athletic horse. They do show running ability, that’s for sure.”

Westbury Stud General Manager Russell Warwick was thrilled to see Te Toki deliver and is encouraged by what he has seen from the first crop of the stud’s young sire, with Tarzino the winner of the Group 1 Rosehill Guineas (2000m) and Group 1 VRC Derby (2500m).

“Te Toki was a short-priced favourite and it is always nervous times when you see them that short on debut, but he vindicated the support that he had. His trials had been good so it was good to see him frank it on raceday,” Warwick said.

“A lot of them have been sitting on their hands to get to three. He is by Tavistock, out of a Zabeel mare, and how many two-year-olds have Tavistock and Zabeel produced? Not too many.

“To have a city winner in Australia and a nice early horse in New Zealand that looks like he is pretty smart, you couldn’t have asked for a better start. You would like to think that as they step up in distance they are going to get better and better.

“It is early days, he has only got a couple of winners on the board, so we are not getting too far ahead of ourselves. In saying that, it gives you a lot of encouragement to know they are bred to stay and make Derby and Oaks three-year-olds down the track, and older.

“Mick Price has two that he is a bit excited about. They were both bought off us, one from the Gold Coast and one at Karaka.

“He bought a horse called Mangani in partnership with Duncan Ramage. They paid AUD$230,000 for him. He was the highest priced Tarzino in the first year. He has a high opinion of him and thinks he is a good horse.

“Jungle Magnate is back in work and I think the plan is to get him to the backend of the Spring Carnival in Melbourne, with a view to him developing into a nice horse in the autumn.”