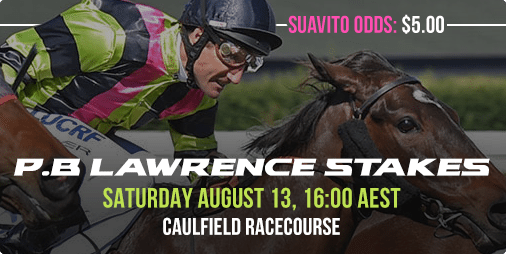 THE $200,000 P.B. Lawrence Stakes features some of Australia’s top spring hopefuls and it runs at 4pm this Saturday at Caulfield.

Spring fancies Mahuta and Suavito headline the 1400m feature and dominate the market, but there are plenty of winning chances in the field of 15.

We have free tips, odds and form for all nine races on the card which also includes the Vain Stakes, Quezette Stakes and the Regal Roller Stakes.

Sign up to CrownBet.com.au and get a bonus bet (up to $50) if your horse finishes second or third in any of the last four races at Caulfield.

The Cindy Alderson-trained gelding O’lonera has put together two consecutive wins and it didn’t give them a chance last start at Caulfield when it won by 3.5 lengths. The four-year-old is twice a winner on this track and this grade suits it nicely. It opened at $3.30 and has been well backed into $3.20.

Hursley has won two of its last three and Craig Williams is sticking like glue. The Chris Waller-trained gelding has now won four from 16 which includes two on this track and it carried 60kg to victory last time out. Has a good draw and it should prove tough to beat at $4.60.

Khutulun is a last start winner which gets a 3kg claimer in the saddle. The Luke Oliver-trained mare is trained on this track and it looked good winning in this grade by 1.5 lengths last start. It rarely goes a bad race, but it will be searching for a track no worse than good.

Rustic Melody is having its first start in Melbourne after contesting strong races in Sydney and it looks well placed. The Kris Lees-trained mare won in this grade three starts back by one length over subsequent winner Harlem Lady and it was last seen running on well at Rosehill. Gets the inside draw with Damien Oliver riding and it has been kept safe at $5.50.

Kaniana has yet to win in three starts this campaign, but it has the flashing light on after a strong finish at Flemington last start. The Darren Weir-trained mare didn’t have the best of luck after being blocked in the straight and it stays at the same light weight of 52.5kg for this. Has been nicely supported into $3 after opening at $3.20.

Choice is a former New Zealand mare which finished only 1.1 lengths behind the winner in its Australian debut at Caulfield. Now with Nigel Blackiston, the five-year-old has shown its best form on rain-affected tracks and it should be improved with that run under its belt. Each way chance at $6.

Mick Price lines up Volcanic Ash which sprinted late to finish third at Flemington last start and it drops in grade for this. The son of Magnus has won five from 17 with five placings and three have come at Caulfield. The form behind Royal Rapture last start should hold up well and it should run well again. Currently a $6 chance after opening at $5.50.

Leica Day has been one of the best backed runners in the race. It opened at $3.10 and is currently $2.90 following a last start third behind subsequent winner Ulmann. The five-year-old put three consecutive wins together last preparation and although this is much harder, it should be respected based on the tote support alone.

Chivalry has won only twice, but it has put in some improving runs with new trainer Darren Weir. The five-year-old battled on well behind Turbo Street last start and it was only narrowly beaten at Bendigo two back. It won’t have everything go its way from barrier 11, but it’s an each way prospect at $7.50.

Ocean Embers is a promising mare which has won two from five starts. The Shea Eden-trained mare won on debut by three lengths before running fifth in the Champagne Stakes at Moonee Valley. It produced its best performance on this track two starts back when it won by 1.5 lengths in a three-year-old handicap. Its second placing in the Lightning Stakes at Morphettville was solid and it should go well again at $4.

Atmospherical is a former class runner which produced its best run for some time when third last start in the Monash Stakes. The Robert Smerdon-trained mare has yet to fire in six starts at Caulfield which is a major concern and it finished 15.45 lengths behind Flamberge last time on this track. Has ability, but the $4.40 is a touch short for our liking.

Mossin’ Around is bred for the wet, but it has been running well on the firmer surfaces. The daughter of Mossman won on debut and has since placed in some quality races. It ran second behind Hellbent in the Inglis Dash before running second again behind Risque in the Kevin Hayes. It gets into this carrying only 51kg and it’s a big danger to the favourite.

Russian Revolution has been mightily impressive in two unbeaten starts to date. The Peter and Paul Snowden-trained colt won narrowly on debut before easily winning by two lengths over subsequent winner Morton’s Fork at Randwick. The well-bred son of Snitzel won a trial late last month and it has been well supported into $2.20.

Artie Dee Two is also unbeaten after two starts, but it has been drifting in the market steadily. The Darren Weir-trained colt opened at $4.50 and is now at $4.80 despite drawing the inside barrier. It produced a strong finish last start at handicap level and there’s no reason why it should be drifting. This isn’t an easy race, but consider it for the win.

Revolving Door finished fourth in the Blue Diamond Prelude on debut before winning at Sandown over Seaburge which has a solid future. The Clinton McDonald-trained colt then finished third in the VRC Sires’ at Flemington behind Seaburge and despite the 1100m distance being short of its best, it looks to have a decent chance at odds of $10 here.

Sword Of Light is a two-win filly which looked good winning a Blue Diamond Preview at Caulfield at its second start. The New Approach filly ran at this track last start when fresh up and the signs were positive. It flashed home for second behind Derryn and the form out of that race should stand up throughout the spring. Inside draw to its advantage and the $8 available is a value price.

Modern Wonder was a winner on debut in Adelaide and it has been well backed in this. The Corstens’-trained filly is bred to sprint being by Snitzel and it’s the current favourite at $5.50 despite opening at $5. Keep a watch of the market and if it tumbles in price, a big run should be expected.

I Am A Star is a back-to-back winner which won a quality race at Morphettville last start by three lengths. The daughter of I Am Invincible has drawn extremely wide in barrier 15 which won’t help its chances, but it has plenty of ability and it ran a solid trial for second on August 8. Keep in mind for this at $6.50.

Race 6 tip: Sword Of Light to win ($8) at WilliamHill.com.au

Mahuta is the current favourite at $4.20 following a handy run for third in the Bletchingly Stakes. The well-regarded four-year-old strung together multiple wins last season and defeated some good horses in the process, so winning a race of this quality isn’t beyond it. It’s unbeaten in four starts at this distance and it should be tough to beat.

Suavito is best when fresh up having had five starts for three wins and two placings. The Nigel Blackiston-trained mare also loves Caulfield where it has won four and placed in four from eight starts. It has stayed steady in the market at $5 all week and punters should be backing it on the day.

Miss Rose de Lago has come in for surprising support. The six-year-old mare goes well fresh and runs best at Caulfield with four starts for three wins, but this is another step up and we’re prepared to risk it at $6.50 in the betting which is fractionally shorter than it should be.

Girl Guide’s form line doesn’t read well, but it was working home well last time out in the Monash Stakes and it could continue on with it. The Ciaron Maher-trained mare has been solidly backed in the market which suggests that a big run is expected. It has the inside barrier and it’s carrying only 54kg which is a dangerous weight for a class runner. It opened at $6 and is currently at $4.60.

Fast ‘n’ Rocking finished off well behind Lord Of The Sky in the Bletchingly Stakes last start and it hasn’t had the best of luck this campaign. Dwayne Dunn gave it a shocking ride in the Monash Stakes and it wasn’t much better last time out. From barrier five it should settle closer to the pace, but it has drifted from $2.80 to $3.20. Watch the market.

Voodoo Lad is a talented sprinter which has won six from 13 with seven placings. The five-year-old finished second at Flemington two starts back and it wasn’t disgraced when third behind Mighty Like last start. It goes best on rain-affected ground and the weight of only 54kg will help. Each way chance at $4.60.

Magicus is a quality five-year-old which has now won four from seven. The Chris Waller-trained gelding flew home for second last start at Caulfield and it was extremely unlucky not to win. It put away a good field at Moonee Valley prior and despite having to carry 60kg, it looks tough to beat at $4.20.

Mr Individual was a last start winner at Caulfield and that form should roll over to this. The four-year-old had previously raced in the Sunshine Coast Guineas when it ran fourth behind Tivaci and that form is very strong for this level. Two of its wins have come on this track and it should be tough to beat at $4.80.

Prince Of Brooklyn has recorded three consecutive second placings and it’s ready to break through for the win. The Mick Price-trained horse finished second behind Divine Mr Artie last start and it would have won with another 50 metres. Tricky draw, but worth inclusion at $4.60.