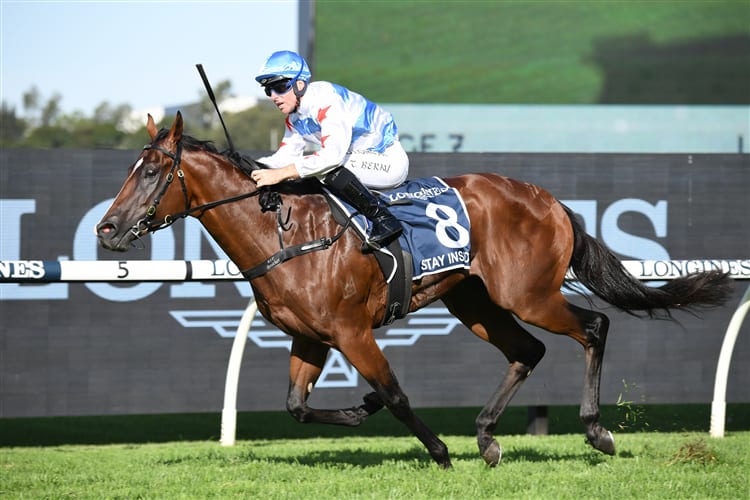 Stay Inside has added the latest chapter to the Freedman family’s Golden Slipper dynasty with a breathtaking win in the world’s richest two-year-old race.

Under the leadership of Lee Freedman, the brothers claimed four Slippers in a row starting with Bint Marscay in 1993 and on Saturday at Rosehill, it was Michael and Richard’s turn to capture one in their own names.

“It’s an amazing feeling. My brother Lee, who I think is on course today, I was there with for all our four wins prior and Anthony, who is back in Melbourne at the moment and trained Bint Marscay to win our first Slipper,” Michael Freedman said.

Stay Inside (+360) was given a beautiful ride by Tommy Berry, who positioned him in a trailing position behind the leaders.

The colt pounced at the top of the straight and had the race won a long way out, scoring by one-and-three-quarter lengths over Anamoe (+1400) with his Godolphin stablemate Ingratiating (+1900) another two-and-a-quarter lengths in arrears.

Michael Freedman, who returned to Australia from a luckless stint in Hong Kong at the end of 2018 before teaming up with Richard at the start of the 2019/2020 season, said Stay Inside’s victory was a long way from their Golden Slipper day experience 12 months ago.

“Last year we sat at home, we didn’t have a runner anywhere,” Michael Freedman said

“To have two in the race today and come away with the winner, I’m a bit speechless.”

The Slipper triumph was Tommy Berry’s third after victories on Vancouver (2015) and Overreach (2013) and he was happy the Freedmans didn’t listen to his original advice.

“I remember telling Michael when I rode this colt in his first trial that he was probably a preparation away and I don’t know how far you should push him. How silly I was,” Berry said.

Profiteer started favourite and took up his customary leadership position but tired to finish seventh.