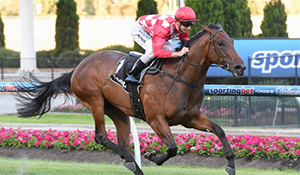 SISTONIC, the three-quarter relative to Black Caviar, is putting its unbeaten record on the line in the Typhoon Tracy Stakes at Moonee Valley on Friday night.

Facing its toughest test to date, the talented daughter of Bel Esprit has been confidently-backed by punters to beat a very impressive field of sprinters over the 1200 metre distance. The filly opened as short as $1.70 with WilliamHill.com.au, but has since drifted under market pressure and currently sits at a more respectable price of $1.90.

The David Hayes/Tom Dabernig-trained filly won by 4.5 lengths on debut at Sale before winning hands-and-heels at Moonee Valley last start, winning hard-held by a length. The opposition it faces in the Typhoon Tracy poses many more problems with classy horses such as Eloping, Royal Snitzel and Matilija.

The three-year-old has reportedly taken plenty out of its two starts and co-trainer Tom Dabernig is pleased heading into the race.

“We couldn’t be happier with her leading into the race,” Dabernig said.

“This is the first time that we have seen her in this company, but now she has had the benefit of a couple of runs and the benefit of racing at Moonee Valley, which she handled really well.

“From barrier two she should get a nice run in the race and she certainly hasn’t taken any backward steps.

“I look forward to seeing how she can measure up tonight.”

Also with a chance is Royal Snizel for trainer Mick Price. The three-year-old filly hasn’t finished worse than second in five career starts and it will no doubt contest the lead with Sistonic.

“To me it looks like there is a fair bit of speed and she has lovely natural gate speed,” Dabernig said.

“I think that we will just let Michael [Walker] work it out in the first 150 metres and if she begins really well we certainly wouldn’t be handing it up.

“If the speed is coming from outside us I think that we can just sit off them. She will be up on the pace.”

Despite the obvious rise in grade, Dabernig isn’t downplaying his confidence.

“I am as confident as she can be and I am always a little conservative, but I think that she is a really high class filly.”