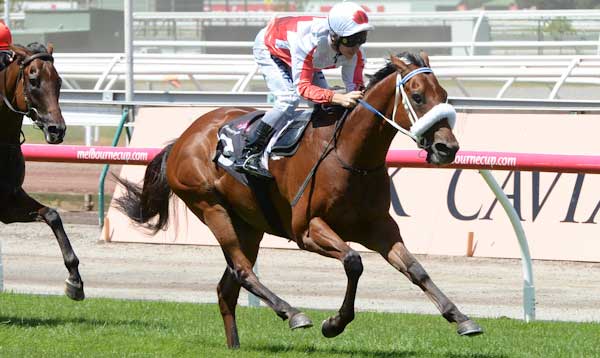 TRAINER John Thompson hasn’t worked with Sir John Hawkwood for long, but it’s been long enough to earn the approval of owner Paul Fudge ahead of the Group 1 Metropolitan this Saturday at Randwick.

Fudge visited Thompson’s stables and gave Thompson the nod ahead of the $750,000 co-feature on Saturday.

“He said to me that it is the best the horse has looked,” Thompson said.

“Blake Spriggs (jockey) said the same thing. I have to admit they probably know more about him than me because he has only been here for a month or so.

“Paul was very happy and said it looks like you will have your first winner for me on Saturday. It didn’t sink in straight away but it is a group one, that would be pretty special.”

The eight-year-old was transferred from David Vandyke’s stable after finishing second in the Brisbane Cup and it’s being set for the Caulfield and Melbourne Cups in Melbourne.

It has had one start for Thompson – a placing behind McCreery in the Kingston Town Stakes – which should be good form this spring.

“They just told me to keep him fresh, he races best like that, and the plan was one run and into the Metrop,” Thompson said.

“He was very fit and well when he arrived and I have just kept him ticking over.

“Everything he has done has been like a nice stayer and the first-up run was good. He has improved from that and everyone who knows him better than I do is happy and I’m happy with him as well.”

Sir John Hawkwood is the $6 equal-favourite at Sportsbet on the same line as former New Zealand runners Sacred Master and Antonio Giuseppe.

Who Shot Thebarman produced an eye-catching run last start and looks the value at $9 with CrownBet.com.au.

Talented gelding Signoff has had a year to forget and the news got even worse after it was scratched from the Hill Stakes because of a leg injury.

Trainer Darren Weir has given a bleak forecast for the spring, which will likely rule it out of the 2016 Melbourne Cup where it was looking to better its fourth position from 2014.

“We’ll make a decision this week whether we stop.

“I’ll have to talk to Gerry (Ryan) and Sandy (McGreggor) – the horse’s owners – and see what they want to do. It’s not looking good, but we’ll see what happens.

“He galloped Tuesday and was fine and then on Thursday he’s got a bit of heat back in his leg.”

Weir is more optimistic about the chances of Tosen Stardom and Royal Rapture, which are both on target for the Group 1 Toorak Handicap. Tosen Stardom missed its last run due to injury and Weir will make plans following its next start.

“He will start work on Monday. He has just been able to walk through the week, his stitches have held pretty well,” Weir said.

Royal Rapture won for the sixth time in seven starts on Saturday and after carrying big weights this season, it will drop right down in the weights for group one company.

“We will throw him in the deep end now and have a go at the Toorak I think,” Weir said. He deserves his chance. Winning five in a row in town is a pretty good effort.

“He’s been up for a long time, he’s very sound, he’s got a will to win. Put him in a better race I am sure he will run well.”

Trainer Darren Weir will work Palentino in blinkers on Monday before he decides whether to apply them on race day.

Weir believes the addition of blinkers might give his runner the edge.

“Obviously you need to get every inch you can and it might be just a good little gear change,” Weir said.

Palentino was able to defeat subsequent group one winner Black Heart Bart last start and his only worry is racing right handed.

“I don’t know really (about racing right handed) and he is not an easy horse to ride, so obviously it’s a little tricky I guess,” Weir said.

“Also he has a bit of weight but anyway we can’t do much about it.

“He is a pretty good horse and (the Makybe Diva) was the race he had been aimed towards and obviously being a stallion it was just great he did it.

“I was really happy with the way Black Heart Bart went (on Saturday) and Palentino has to have his final bit of work and providing he works well he will go to Sydney for the Epsom.”

Weir has yet to train a winner in Sydney, but believes Palentino is good enough to break the drought.

“He is a great sort of horse and he is one of those horses that is definitely going to get better as they get older,” Weir said.

Palentino has been well-backed at $7 with Sportsbet to make it back-to-back group one wins.

A lack of group one races this spring in Sydney is forcing the big-name trainers to enter their runners in the Melbourne Spring Carnival.

Trainers would prefer to run their horses in their home state, but for the likes of John O’Shea and Chris Waller, there just wasn’t enough in Sydney to keep their stars home bound.

O’Shea could have started Hartnell at Randwick this Saturday, but will instead send the quality runner to Melbourne for the Turnbull Stakes at Flemington.

“He has earned his shot at a group one and there is not one in Sydney for him,” O’Shea said.

“The 2000 metres is perfect for him and I think Flemington will really suit him.”

Chris Waller could have run champion mare Winx in the Craven Plate, but being only a group three was a turn off.

“She could easily run in the Craven Plate, but it is not a group one, so we didn’t look at it,” Waller said.

Winx will instead head to the Group 1 Caulfield Stakes where punters can get $1.50 for Winx to defeat Black Heart Bart at CrownBet.