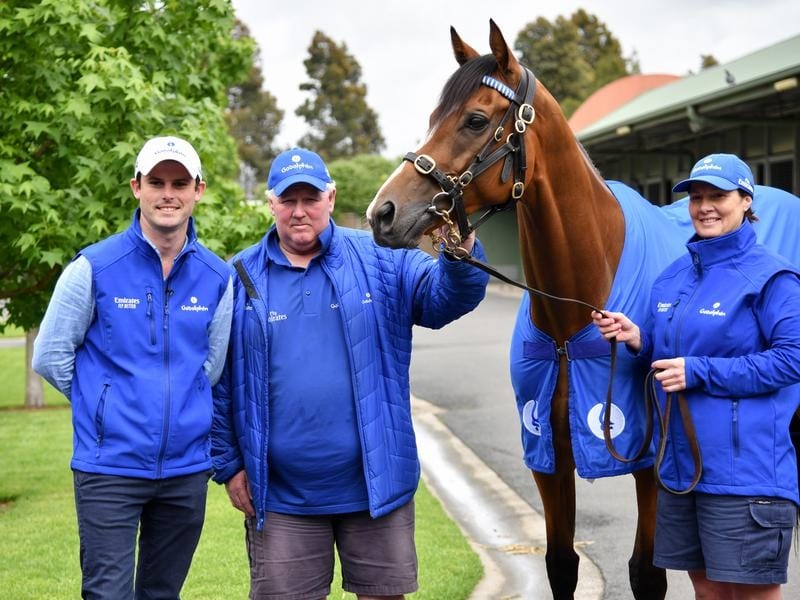 The most popular horse Godolphin has imported to Australia will fittingly make his final racetrack appearance at Group One level.

Hartnell bows out in the Mackinnon Stakes (2000m) at Flemington on Saturday after a career that has taken in the country’s best races.

Among all the high quality horses at Godolphin, Hartnell stands supreme.

The nine-year-old will join Godolphin’s Lifetime Care program to be retrained, most likely as show horse.

Senior foreman Reg Fleming has been entrusted with Hartnell’s care following Saturday and said it was a privilege to work with the horse and to be his custodian after racing.

“He’s a kind horse, he’s got a presence about him,” Fleming said.

“He’s easy to deal with and that’s why the staff are up and about.

A long-time foreman for Bart Cummings, the grandfather of Godolphin trainer James Cummings, Fleming said he was shocked to learn he would take control of Hartnell.

Fleming also oversees the post-race careers of ex-Bart Cummings-trained horses, four-time Melbourne Cup runner Precedence and dual Group One winner Sirmione who both appear in the show-ring with Fiona McIntyre.

“It’s not so strenuous on them. It keeps them healthy, keeps there mind ticking over, mentally they’ve always got something to do.

“I’ve got Sirmione, Precedence and Moher and if you see them now they look better than we had them.

“I get a little emotional when I see them because they’re so well and happy.”

Fleming rates Hartnell’s win in the 2018 Epsom Handicap at Randwick his best.

“I was watching Precedence at the Garryowen (for show horses) and watching Hartnell on my phone,” Fleming said.

“I started getting a bit excited and I started screaming and people around me thought I was mad.”

After taking over the training of Hartnell in 2017, James Cummings agrees with Fleming the Epsom win was a highlight.

“Reg was ringing up to say how proud he was of Hartnell and how big the performance was.”

Cummings said there was no doubt Hartnell would be missed but the stable had been preparing for his final race for six weeks.

“We’re quite happy with how his form has unfolded in the lead-up and hopefully he can go out with a big performance and the best run of his campaign,” Cummings said.

“He’s a juicy price for anyone who might want a sentimental bet on the weekend.”

Godolphin Australia boss Vin Cox said the team hoped Hartnell would do well at Flemington but he had already given more than anyone could expect.

“Win or lose, this champion has given us all so much. He has nothing to prove on Saturday, but we all know he will give his all,” Cox said.

Started in 34 Group One races, finishing in the placings 50 per cent of the time

Finished second to Winx four of the eight times they raced