Should you back Capitalist at Gold Coast? 2YO & 3YO classic tips

Racing Online - Tips - Should you back Capitalist at Gold Coast? 2YO & 3YO classic tips 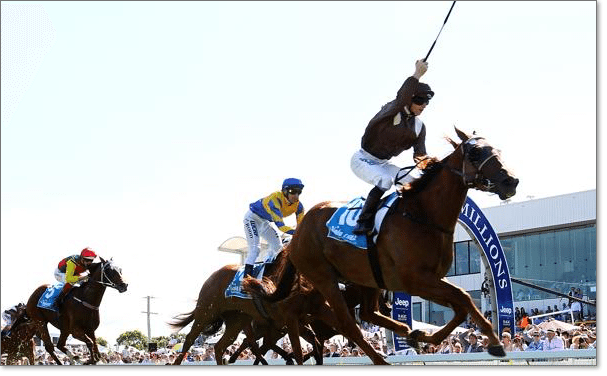 THE 2YO and 3YO Classics this Saturday at Gold Coast are two of the richest races of their kind in the world.

It’s also worth placing a bet on the nine-race card, which also features the Magic Millions Cup, where the Darren Weir-trained Lucky Hussler holds favouritism.

There’s big fields and big value, so get involved at the Gold Coast this Saturday.

Wutai Mountain is a Chris Waller-trained filly which has run second behind two quality types in two maiden races. It finished well down the track in the Listed Woodlands at Scone, but it should find this much easier and James McDonald takes the ride. Drawn well, weighted well, and it’s a value chance at $9.

Wolf Cry is coming off a last start fifth in the Group 3 Baillieu and its start prior yielded a third behind champion three-year-old Exosphere. It hasn’t yet faced an easy field and this looks right within its range. Peter and Paul Snowden are running hot and the move from $2.80 to $2.40 suggests the punters have taken notice.

The Liam Birchley-trained Sagatona was pulled up last start which is concerning, but it has placed twice on this track and the Gold Coast can be a horses-for-courses track. It was considered good enough to run in the Group 1 J.J Atkins so it could fill a place in this at nice odds.

Buffering is the shortest priced favourite you’ll see at the Magic Millions. The Robert Heathcote-trained champion is a $1.20 chance to win this and that’s deserving after it won the Group 1 Winterbottom Stakes at its last start. The 10-time winner is having its first start on this track and will carry 61kg from an outside draw, but it should lap this field.

They key to this race is about finding the place value and Mr Jetset is a chance at $4.60 for the place. The Tony Gollan-trained gelding was very unlucky last start when it got held up in the straight. Its form prior included a placing at Ipswich and a win on this track. It goes well here and it could run second or third.

Steel Zip is a chance at $2.35 a place if punters can forgive its last run. The Pat Duff-trained gelding finished last in the soft going at Doomben, but it had won its last three prior to that. Its track stats don’t read well which is concerning, but look for a quick rebound run in this.

Echo Gal was a disappointment last start at Randwick and trainer Gai Waterhouse will expect better this time around. The four-year-old mare didn’t cope with the wet track and if the track stays dry, its winning chances increase significantly. Light weight chance at $14.

Private Secretary is the current $4.20 favourite after a strong effort for sixth last start. The daughter of Husson has won and placed twice at this distance and it is unbeaten in all three second-up runs. That bodes well for this and with James McDonald in the saddle, punters are confident of a strong performance.

Sino Eagle comes over from Melbourne with handy form and it almost won at Caulfield last start. It likes to take a few runs to show its best and after two runs this campaign it should be ready to fire now. Loves dry ground and punters can get $10 odds.

Centre Pivot was a strong last start winner at Doomben, taking its overall record to eight wins from 18 starts. The Peter Robl-trained gelding has had three runs back this campaign and will look to keep its good form in tact with another win here. It won its only start over this distance and bookmakers have dropped its opening price of $5 to $3.80.

Tinto has also been well favoured at $4.80 following a last start win on this track. The five-year-old mare has won four from five on this track and the inside draw will secure a good spot throughout the run. It ran on well in the Group 1 Coolmore five starts back and that class should take it very close in this.

Worthy Cause scored a quality win at Flemington in October and its runs since have been full of merit. The son of Choisir hasn’t finished further back than fifth in its last five starts and that consistency is what punters look for. The $5.50 is a touch short, but the place money looks good.

Bachman has hit form at the right time with back-to-back wins. The Gerald Ryan-trained gelding will need to make another rise in class to defeat this field, but it’s running well and McEvoy once again rides at a luxury weight of 54kg. Chance at $5.50 after opening at $5.

Lucky Hussler has also drifted in the market after opening at $4. The Darren Weir-trained gelding is a former Queenslander which now sits at $4.20 in the betting and even though it hasn’t won here in four starts, it looks a solid winning chance based on class. Its fresh up form is good and it should get a chance in the straight.

Murt The Flirt wasn’t far behind Flippant last start in the Wyong Magic Millions Stakes and that form should stack up well for this. The four-year-old was a stylish winner its start prior and the coveted inside draw will play a big part in this. Each way chance at $8.

Mahuta is the class colt of the field with wins in three consecutive black type races. The Darren Weir-trained runner won the Group 2 Sandown Guineas last time out very easily and drawing barrier 20 is the only negative for this. We’re expecting it to try settle midfield and launch a claim around the outside. Its opening price of $4.20 has drifted to $4.60 but that’s not surprising.

Flippant has good exposed form heading into this with a last start win in the Magic Millions at Wyong. The Peter and Paul Snowden-trained filly defeated race-rival and top chance Egyptian Symbol by 1.25 lengths and it’s a horse on the rise. It has drawn barrier 19 which will make winning difficult, but if the outside runners can work together to get some cover, it will be tough to beat. $6.50 has dropped to $5.

Egyptian Symbol has won three from five with two placings and its last two efforts have suggested it could win this. The Bjorn Baker-trained filly has a nice weight of 55kg for this and it strikes a much better barrier than most of the main contenders. Will look to settle handy and produce a sustained finish in the straight. Each way chance at $4.40 after opening at $4.60.

Tip: Flippant to win ($5) at WilliamHill.com.au

We must mention the current hot favourite Capitalist first. The Peter and Paul Snowden-trained colt looks to have a mortgage on this event, but racing is never an easy game. It has looked special in remaining unbeaten after two starts and despite a few niggling problems in the lead-up, it will continue to be well supported. Bookmakers’ best price is $1.65 which should stay steady.

Niccolance must be respected after finishing second behind Capitalist last start. It was never a winning chance, but the stablemate to the favourite gets a senior rider in James McDonald in the saddle and it should improve nicely with more racing. Its price dropped down to $9 earlier in the week and bookmakers have just let it out slightly to $10 where it currently sits.

Gai Waterhouse knows how to train a winner in this event and Slumber Party looks a chance at $16. The filly has drawn wide in barrier 19, but it will go forward and most Waterhouse runners do and that could negate the draw. Its two runs to prepare were solid and the $16 looks good value in an open race behind the favourite.

Wild Rain is a six-win mare which defeated a handy field last time out at Sandown. The Mark Kavanagh-trained mare has form in behind Murt The Flirt and The Quarterback which reads well for this and Glen Boss rides down in the weights at 54kg. Looks a handy chance at $4.40 after opening at $4.60.

Didntcostalot is in the form of its life after winning the last four from five. The Tony Gollan-trained gelding has had five wins at this distance and it loves to lead and run the opposition into the ground. Expect similar tactics with Tegan Harrison in the saddle and it could lead them all the way at $4 with bookmakers.

Husson Eagle is a well-performed type which has needed the two runs back this preparation and it should figure in the finish here. The Patrick Payne-trained gelding finished third at Randwick last start behind Rule The River and it gives Melbourne Cup-winning jockey Michelle Payne a handy chance at Magic Millions glory.