She’s Extreme takes out the Magic Night Stakes at Rosehill 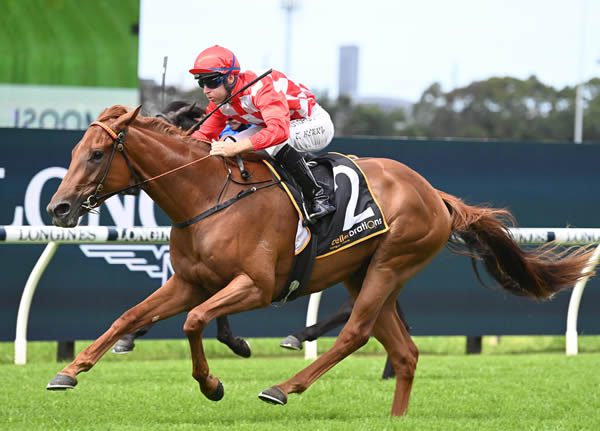 She’s Extreme is the final filly to book her spot in next Saturday’s $5 million Golden Slipper after a 1.44-length win in the Group 3 Magic Night Stakes at Rosehill Gardens.

The Anthony Cummings-trained two-year-old went into the 1200m event as a drifting $3.30 chance with online bookmakers, proving too tough for Magic Carpet and Swift Sweet.

Ridden by Tommy Berry, the daughter of Extreme Choice settled down worse than midfield in the run and proved too strong in the heavy conditions.

Cummings was thrilled with the way that his filly won the Magic Night, saying she has promised that for a while.

“I suppose she has had that practice now and what she was losing in experience at those first couple of runs she has now got under her own belt,” Cummings said.

“That showed when it got tough, and she is just a high quality filly.

“It was a different sort of wet track today and the fact she was wide again, and the wide barrier has beaten her twice so far, even money was probably a bit of unders but she got to something like the right price and the punters went again.”

The filly had strong form heading into the Group 3 event, coming off a solid second last start at Randwick behind Fireburn in the Sweet Embrace Stakes.

Cummings said that the winning filly is likely to push on to the Golden Slipper in just seven days’ time, despite the trainer not expecting her to be there after her last run.

“A month ago, I didn’t think that that would suit,” he said.

“But she has surprised me every time with the way she has bounced back from each run.

“After her last run, I had given up hope of being in the Slipper at all, but she came back and talked me into going today and I’m expecting she will do exactly the same (this week).

“She will bounce back, and she will be ready to go again by Tuesday.”

She’s Extreme is now a $13 chance for the Golden Slipper Stakes, which will be run over 1200m next weekend at Rosehill Gardens.