Sharrock on a winter mission 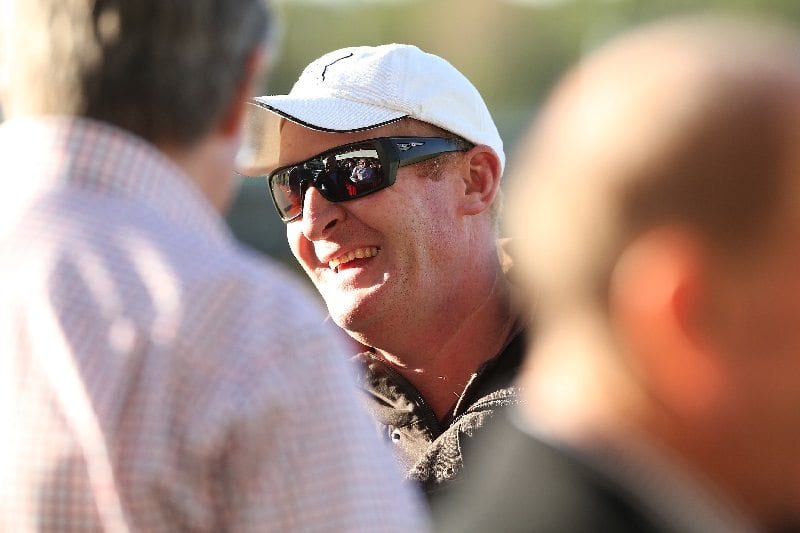 New Plymouth trainer Allan Sharrock currently sits on 30 wins for the season and he is on a mission to equal his previous best tally of 40 wins set in the 2001/02 season.

The Taranaki horseman has just under two months to secure 10 wins, but he believes he is taking enough firepower into the winter months to achieve his target. “The team is going really well,” Sharrock said. “I’d love to get 40 (wins). I think 40 was my best year. “We have got a bit of work to do, we have go to get 10 in the next two months, but I have got a little bit of fire power, so hopefully we can get somewhere near that.”

Sharrock will be hoping to add to his winning tally at his home track on Thursday where he will line-up six runners. Debutant Chilli Jean and a fresh Beckidboo will compete in the NZB Insurance Pearl Series Race (1200m). While he isn’t expecting a lot from Chilli Jean, he believes Beckidboo will thrive in the heavy track conditions. “She’s (Beckidboo) had the benefit of two or three jumpouts and she is a mare that relishes bad ground,” he said.

“Her run in December (unplaced run last-start) might have been disappointing to look at, but she felt the ground and I put her aside for the autumn. I think she will race really well. “From the two barrier, I’d say Madan (Singh, jockey) would have her in the first four or five. “Chilli Jean will benefit greatly from the run. Probably another jumpout would have helped us, but they are local owners and she has run a few placings at recent jumpouts, so she is forward enough to race, but whatever she does she will improve greatly with.”

Another filly heading into Thursday in a fresh state is La Feelya, who will resume in the Zed at Grangewilliam Stud 1100. “Her jumpout form has been very strong,” Sharrock said. “I thought it was a field that had a little bit of form in it as well. “I rate her right up there with the form in the race. Going on her last jumpout, she was very impressive, so I expect her to race really well. I think the loose conditions shouldn’t worry her too much either.”

Sharrock is looking forward to lining up three-year-old debutant Come Sei in the Stable Books Supporting NZ Trainers (1400m) after his impressive trial win at Foxton in April. “It was a terrific trial,” he said. “There were three other winners that came out of that trial meeting, so going off the form on that day I am expecting him to race very well. He was very strong in his trial and he seems very adept in wet conditions. “He’s a half-brother to a nice horse who raced a few years back called Puttanesca. I like his chances tomorrow.”

Sharrock has more conservative expectations with five-year-old mare Belle Tem who will line-up in the Stable Books 1400 after finishing unplaced when fresh-up over 1400m at Hawera last month. “She’s not that flash in wet ground,” he said. “It was a pass mark for me (last start) because she had only one quiet jumpout going into it. “She’ll improve greatly with the run and she looked that way on Saturday when galloping on a loose track, she galloped quite well. She’ll be at longer odds, but it wouldn’t surprise me to see her running in the money.”

Sharrock’s final runner on the card is three-year-old Reliable Man filly Sister Monica and he is expecting another strong showing from the diminutive three-year-old when she competes in the Stable Books Remembering Harold Tuson Maiden 1400. “She’s a nice filly,” he said. “She’s only a pony, but is tough as teak and is out of a good race mare. “She’s had two starts for two fourths and didn’t disappoint in either one. She was probably entitled to run closer last start. “She’s had the benefit of two jumpouts and she never gives in. I can see her being very competitive in the last.”

Sharrock is pleased with all six runners heading into Thursday, but has highlighted debutant Come Sei as his best winning chance. “Come Sei, he’s quite a nice horse and is very progressive,” he said.