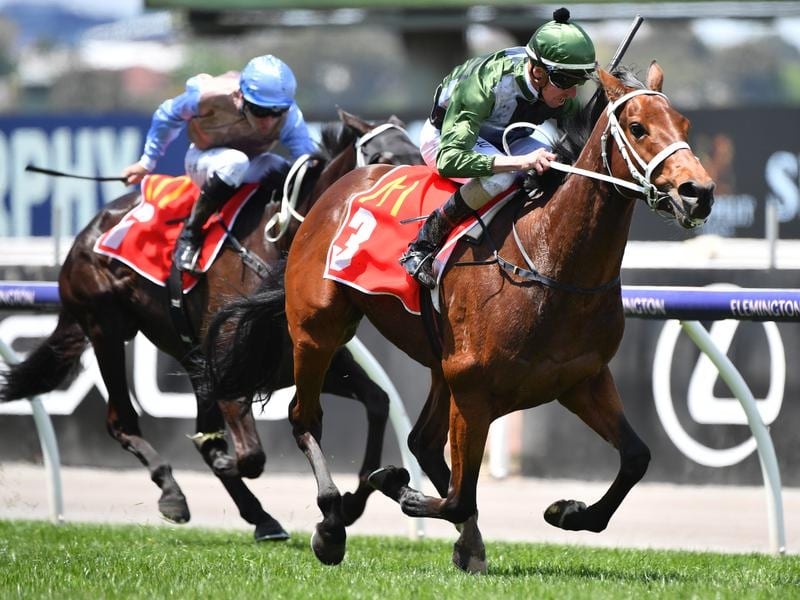 Shared Ambition could find himself in the main race at Flemington this time next year after stamping his staying promise with a strong win on the Melbourne Cup day support program.

Trainer Chris Waller says the sky is the limit for import Shared Ambition, who is still a three-year-old to northern hemisphere time.

“Being a northern hemisphere horse there is still a lot of upside and looking at him he’s still going to furnish,”Waller said.

“We’ve asked him a couple of serious questions and he hasn’t let us down.

“He will go for a break now and we’ve got the luxury of dreaming about what may be ahead in 12 months time.”

Nash Rawiller rode a confident race aboard the $1.50 favourite, settling him well back on the fence and with a wall of runners ahead.

But as the field fanned on the corner, Rawiller and Shared Ambition pinched a run along the inside, going on to score by 1-1/4 lengths from Creedance ($26).

Big Blue ($26) was another three-quarters of a length away.

Such is Waller’s opinion of Shared Ambition’s untapped potential, he believes the lightly raced gelding can develop into a weight-for-age horse.

“I think he’s an Avilius or Hartnell type horse but we will just take small steps as we’ve done today,”Waller said.

“The next 12 months could really see him go to another level.”

Waller won the corresponding race last year with Shraaoh who went on to win the Sydney Cup in the autumn.

Waller doubts he will follow that path with Shared Ambition but has not ruled it out.

“He probably won’t go there but it is worth $2 million so you never know.”

The victory gave the champion trainer an early double after Sure Knee saluted a race earlier.