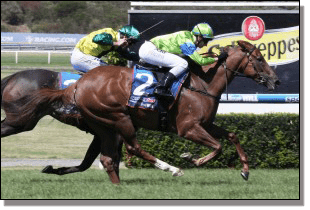 SENTFROMTHESTARS is looking to keep its perfect fresh-up record when it lines up in Saturday’s Nathan O’Mara & Terry Jolley Handicap at Flemington.

The mare had 10 runs last campaign which spanned over five months and co-trainer Simon Zahra said another lengthy campaign was in store.

“She had a pretty taxing preparation last time around,” Zahra said.

“She had a nice 10 weeks off and her trials have been nice and soft.

“She’s not completely wound right up yet because it’s going to be a long spring for her.”

Sentfromthestars is unbeaten in two starts fresh up and will be looking to keep that record in tact in Saturday’s $80,000 sprint (1100 metres).

It raced off the pace in both fresh up runs to date and Zahra – who trains alongside Mathew Ellerton – expects to be adopting similar tactics again in what is a big field at Flemington.

“We’re just trying to get her to chill out a bit because she can get a bit fierce,” Zahra said.

“She’s drawn the right spot so she’ll go back and get a bit of cover so we’ll just get her to hit the line.

“It will be good to see her hit the line because then we’ll know that we’ve got her back.”

Sentfromthestars is currently a $19 chance with Sportsbet.com.au and current favourite is Antarctic Missile at $4.80.

Gai Waterhouse has tossed and turned as to where she will next start 2015 Golden Slipper winner Vancouver, but she has now found the ideal race to kick off its three-year-old campaign.

Star colt Vancouver will make its season debut in the Group 3 San Domenico Stakes at Rosehill next week where it will carry 60kg over the 1100-metre distance.

Waterhouse took to Twitter to announce her plans with the champion colt.

Under set weights and penalties, Vancouver will be forced to carry 60kg for winning the Group 1 Golden Slipper last campaign and it will likely face classy runners Headwater, Japonisme and recent winner King’s Troop.

Vancouver is the current $3 favourite at CrownBet for the Group 1 Golden Rose at Rosehill on September 12 and also the Group 1 Caulfield Guineas on October 10.

Waterhouse loves taking her young horses to the Cox Plate, so the $17 available at Sportsbet.com.au for Vancouver looks like good value this far out from the Group 1 feature during the Melbourne Spring carnival.

Godolphin has retired one of their promising fillies as poor barrier manners have troubled its young career.

Cleanse was undefeated in two career starts but its barrier manners have proved too difficult to overcome, ultimately costing it a chance to ever race again.

On three occasions the John O’Shea-trained filly refused to load into the gates and it’s a real shame as it looked a nice up-and-coming type.

The daugher of Lonhro won at Goulburn before defeating the older horses such as the Gai Waterhouse-trained Mardi at Canterbury.

Assistant trainer Darren Beadman is disappointed that its career had to end in such a manner.

“It’s a shame because she could definitely gallop,” Beadman said.

“But she was a problem child with a mind of her own.”

Change in tactics could help Inz’n’out

The Gerald Ryan-trained Inz’n’out is yet to back up in its 10-start career, but a change in tactics could be what’s needed to get it across the line in first.

The four-year-old finished second behind the talented Fell Swoop last Saturday at Rosehill and this Saturday it takes on the Sky Racing Handicap over 1200 metres at Randwick.

Bookmakers have it safe in the market at $3.40, but the wide draw of eight won’t make it an easy target.

“He used to take a day or two to get over a run and that’s why he was never backed up before, but Sunday morning he had a swim on the walker and I was there watching him and he was really well,” Ryan said.

“He cleaned up his feed the night before and copped the race really well, he’s very bright.

“His fitness levels are good, he’s third-up, I don’t mind where he’s drawn, he can go backwards or forwards.

“If we were ever going to back him up in his right class this is the week to do it.”

Sign-up with William Hill for up to $700 in free bet bonuses.