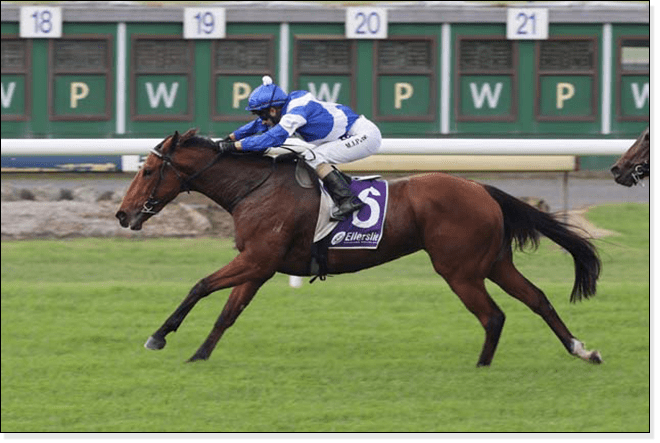 WITH no major races taking place this Saturday in Australia, Rosehill Gardens hosts the meeting with the most value for punters.

The day kicks off with the two-year-old plate where the in-form Bjorn Baker lines up the current $3.25 favourite Geneteau at Sportsbet.com.au. Sign up to get the best fixed odds prices available.

Former New Zealand trainer Bjorn Baker is training well at the moment and he lines up the current favourite Geneteau in the opening race. The two-year-old filly was second on debut and it has prepared beautifully for this with a trial win on October 30. The inside draw is a big bonus in these races and at $3.25 in the betting, it looks a strong winning chance.

Taj Mahal has come in for support at $4.50 following some handy trial form. The Snowden-trained colt finished fourth and third in two trials and it’s owned by the China Horse Club which have had their fair share of top liners. Its breeding should give punters confidence and we’re expecting the price to drop as the race draws closer. Could show up here on debut.

Rafha’s Choice was a solid winner on debut when beating Geneteau and now it steps up over more ground for this. The Bede Murray-trained colt paid $10 on debut and it firms into $6.50 for this, but punters are prepared to risk it despite the solid win. It finished fourth in a trial last month so keep tabs on the betting and include for place bets only.

The Anthony Cummings-trained Best Case has come in for support after a disappointing effort in the wet conditions at Rosehill last start. The son of Savabeel opened at $6 and has been cut to $5 despite having not won for some time now. The majority of its recent racing has come against quality opposition and punters have picked up on this, but we’re not enthralled about its winning strike rate and are prepared to risk it.

Telepathic is a well-performed mare which produced a strong finish to score the win at Rosehill last start. The Chris Waller-trained runner has yet to miss a win or placing in three starts at this track and dropping from 59.5kg to 54kg makes it a massive winning chance. Punters haven’t missed the bus and have gladly accepted the $1.60 on offer from bookmakers. The price is short, but there will be plenty of multi-bets running through this runner.

Stablemate Vilanova finished third last start on a heavy track and a dry surface is much more suitable. The five-year-old has already had 36 starts so it has the miles in its legs and it can produce the upset when least expected. It has placed in three from four starts on this track and it could sneak into the money at a handy price of $8.50.

Sacred Surfer comes over from New Zealand having won its debut race at Te Aroha by a length. The horse that finished second has since produced a stellar win and being trained by Chris Waller will only help its education. The son of Choisir has drawn wide in barrier 10, but expect it to sit midfield and produce a big run down the outside. Is drifting in the betting after opening at $8.50, but include in multiples.

John O’Shea lines up debut winner Ghisoni which won stylishly by 1.75 lengths. The daughter of Lonhro was well backed on debut at $2.35 and it has been heavily supported again. It opened at $2.75 and has already dropped to $2.70, which suggests it will be tough to beat and the barrier draw of 2 looks ideal. Expect another top effort from a promising filly.

Skyclad has come for support at handy odds after finishing third behind Coys last start. The Gerald Ryan-trained colt was a strong winner second up on this track and after opening at $8.50, it was backed into $7 earlier in the week. Its price has now settled at $7.50, but there is enough support there to warrant inclusion at a price. Follow any positive market leads.

High Opinion has had four starts this campaign for a win and two placings. The Chris Heywood-trained gelding put in a big finish to run fourth in a similar race last start at Rosehill and it deserves to be well favoured in this with James McDonald taking over the riding duties. It opened at a value price of $6.50 and has been well backed into $5.50.

Ashjata was a solid winner last start at Goulburn and it placed in the Highway Handicap three starts back behind Invienna. The Danny Williams-trained mare has shown some inconsistencies, but it has a nice record of three wins, five placings from 12 starts and it could show its merit in this. Punters aren’t letting it out of their sights at $6 and it should be included in calculations.

The Big Rig was an impressive four-length winner last start and it wasn’t far away in a similar race two back when running fifth. The Luke Pepper-trained gelding has placed in both runs at this distance and despite drawing wide in barrier 11, it should provide some good value at $13 in the betting.

That’s A Good Idea is the current $3.20 second favourite after two handy placings to kick off this campaign. The Snowden-trained gelding finished third behind Terravista at Randwick when fresh and followed that up with a narrow second placing behind Dothraki. Drawing barrier eight over this distance isn’t ideal, but it’s a talented horse which will be in the finish.

Dublin Lass was only narrowly run down at Flemington when finishing second behind Pittsburgh Flyer and that form should stack up nicely for this. The Snowden-trained mare has won six from 16 which is a very good strike rate and it won its only start at Rosehill. The five-year-old has performed very well second up in the past and from the inside draw with a weight of only 54kg, it looks the testing material at $2.40.

Howmuchdoyouloveme broke through for the win last start after a lengthy drought. The Con Karakatsanis-trained gelding scored easily on a heavy track and it drops in weight to 56kg with Samantha Clenton in the saddle. The seven-year-old goes best at this distance and even though this is a tough field, it should provide a solid place chance for punters. Currently $5 for the win and $1.55 for the place.

I Am Zelady was wide throughout last start on this track when finishing fourth behind race-rival Typhoon Jolie and its run was better than it looked. The four-year-old mare has won only once from seven starts and five placings, but it has always shown good ability and it can either go forward and settle back and hope for some luck in the running. Bookmakers have it on the same line as Typhoon Jolie at $5 which should give backers confidence.

Typhoon Jolie beat a very similar field last start on this track where it remained unbeaten from three starts. The impressive mare by Shamardal put in a strong finish to score by a length over Role Model and there is no real reason why it shouldn’t be the clear favourite in this. It has won four from nine and once at this distance, with two wins coming second up. Looms as a major winning hope at $5.

Holy Delusions is fresh up after a solid campaign which featured two consecutive placings. The Chris Waller-trained mare runs best when fresh up with six starts for one win and four placings, and it could provide some nice place value at good odds. It has won or placed in 16 of its 30 starts which makes the $4.20 for the place seem like good value. Don’t rule out in this.

Lofiel is a professional mare which has won six from 11 with four placings. The David Vandyke-trained runner was a strong 1.25-length winner last start at Canterbury and it will likely go forward and be tough to run down again with jockey Jessica Taylor taking 3kg off its back. It does rise steeply in grade for this which is a concern, but that’s the only concern. Looks a strong winning chance at $4.80.

Happy Clapper surged late to win last time out at Randwick and it’s a lightly tried horse on the rise. The Patrick Webster-trained five-year-old is having just its 11th start this Saturday and it has already won four with four additional placings. It has been patiently handled and bookmakers have opened it up as the $4 favourite for this. It will carry a big weight of 60.5kg, but it looks a winning chance.

The Rumour File is a French imported runner for Chris Waller which has won three from five. The gelding by Dansili has competed at Group 3 level at Longchamp and even though this distance looks a touch short for its liking, it has been respected in the market at $7.50 and it could provide the minor upset.

It’s Somewhat is fresh up where it has won twice from four starts and it should find this easier than its recent targets. The imported runner for John O’Shea last raced in the Group 2 Tramway behind Hooked and its races prior came at group 2 and group 1 level. Its last win came in the Group 3 Liverpool Stakes at Warwick Farm and that form should stack up nicely for this. McDonald returns to the saddle and it should prove its worth at $5 after opening at $6.

Gai Waterhouse lines up Frespanol which was run down late as the favourite last start. The five-year-old has been well backed again at $4.60 and it usually performs better on a dry track with five wins and five placings from 15 starts. It can race off the pace, but expect it to roll forward from barrier seven and be tough to reel in. This field is no pushover so we’re expecting its price to drift slightly.

Gerald Ryan is targeting Peace Force towards the Magic Millions in January and this is a nice stepping stone. The seven-win mare only battled at Flemington last start, but the track was playing tricks and it looks better suited to Rosehill where it has placed on two occasions. Its last win came over Solicit which has since demolished rivals at Sandown and that bodes well for this. Value price available at $10.

The Chris Waller-trained Religify is the opening $3.90 favourite after beating a handy field by three-quarters-of-a-length last time out. The sprinter has now won five from eight in a limited career and it has won two from three at this course. It rises in weight from 54kg to 60kg which is a massive concern and the main reason why it isn’t shorter with bookmakers, but respect on ability alone.

Mohave was a touch disappointing towards the end of his last campaign, but it usually fires fresh up and it’s in the right hands for this. The John O’Shea-trained gelding has won only three from 17, but it has always shown plenty of ability and its win at Doomben three back was classy. This level looks about right and it has been backed at an each way price of $7.

Sure And Fast flashed home late to finish only 1.7 lengths behind Dothraki last start and the seventh beside its name doesn’t do the run justice. It was putting in the big bounds late and its one-length win fresh up indicated its true ability. It won’t get any favours from barrier 12 and it will have to carry 61.5kg, but consider at $5.50 after opening at $5.

Sign-up with Crownbet and receive up to $1,000 in free bet bonuses.