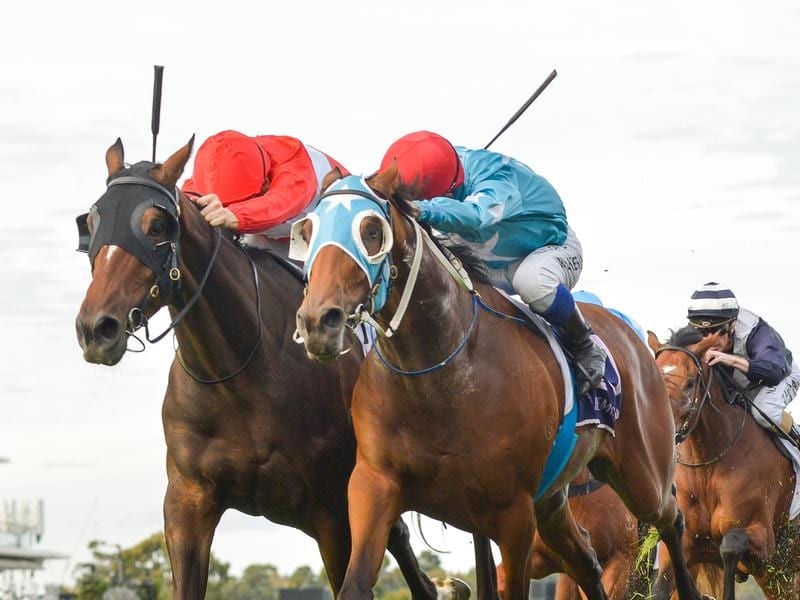 Sacramento has survived a protest to give Gai Waterhouse a fifth VRC St Leger win in the past eight years at Flemington.

The victory also has given the Waterhouse and Adrian Bott training partnership their third successive win in the 2800m Listed race for three-year-olds.

Waterhouse started the streak with Hippopus (2013) and Order Of The Sun (2014) and since teaming with Bott in 2016 has been successful with Runaway (2018) and Transact last year.

However there was an anxious wait, firstly with the closeness of the finish, then in the stewards’ room after Michael Walker, rider of of the runner-up Saint Eustace, lodged a protest for interference over the last 100m.

After a short deliberation, the protest was dismissed, providing Ben Melham his first win in the Classic.

The VRC St Leger, for three-year-olds, pre-dates the Melbourne Cup and is the only St Leger remaining for that age group in Australia.

Stable representative Beau Dunn said he was overwhelmed with the narrow victory.

“I wasn’t sure if I was going to pick up the phone when he came back,” Dunn said.

“Ben explained after the last two rides that he had for us (Scholarly and The Lifeline) that there was a breeze down the back and he wasn’t sure if he wanted to face the breeze.

“So Gai said ‘I’ll leave it up to him, he’s the professional’.

“He just got held up from the 1000 (metres) to the top of the straight and I thought that maybe he wouldn’t get there in time, but with vigorous riding, that’s why Ben Melham was on, and he out-punched them late.”

Having led on the Waterhouse and Bott gallopers earlier in the day, Melham wanted to find some cover on Sacramento, a horse that had led in three of his four lead-up races.

“I thought that breeze was pretty strong around the circle, especially the second half of it,” Melham said.

“He looked the leader in a race of nice speed, but he just stepped a bit awkwardly which worked well as I was always looking for one to cover him up.

“In the end it was a strong staying performance and he was too good.”