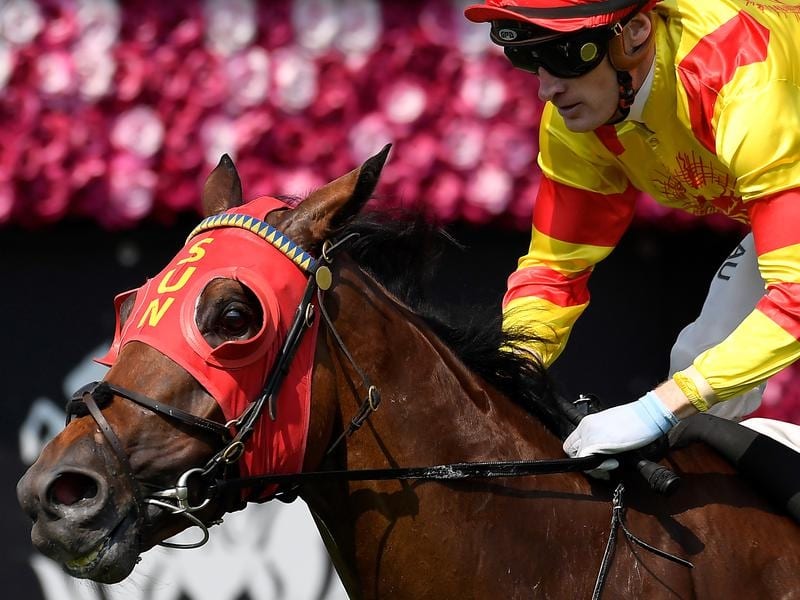 A snap decision by trainer Gerald Ryan to start rookie stayer Chains Of Honour in the Group Three Group Prix Stakes paid off when the gelding won his first black-type race at Eagle Farm.

Despite having only his fourth race start and his second this campaign, Chains Of Honour was heavily backed before starting $1.90 and doing plenty of things wrong in his impressive win.

Despite being trapped deep in the early stage to middle stages and then leading, Chains Of Honour ran around in the straight but was still too good for Mission Phoenix ($4.40), going on to win by 2-1/2 lengths.

Brisbane gelding Mosshiki ($13) battled on to be third, a length back.

Rosehill-based Ryan said he was at loss looking for a suitable race for Chains Of Honour in Sydney.

“There just wasn’t anything for him, so I thought let’s see what is available in Brisbane. I saw this race and I felt it would be perfect for him provided there was some pace,” Ryan said.

“Never did I think he would end up leading but once he was there I wasn’t worried because I know he would just keep going.”

“He will go home to the water walker and then we can see how he looks. The Australian Derby certainly isn’t off the table,” he said.

Chains Of Honour is regally bred being by champion sire Redoute’s Choice out of the 2009 Victoria Oaks winner Faint Perfume.

However, Ryan admits he wasn’t always confident Chains Of Honour would live up to anywhere near his breeding.

“When he won his maiden at Gosford I told his owners they might have their first hurdles winner and then when he won first-up I said he might be a Jericho Cup (a 4600m race) horse,” Ryan said.

Larry Cassidy, who rode Mission Phoenix, said his gelding was also a stayer of the future.

“In a way I regret not leading because I would have been able to roll along and make it interesting,” he said.