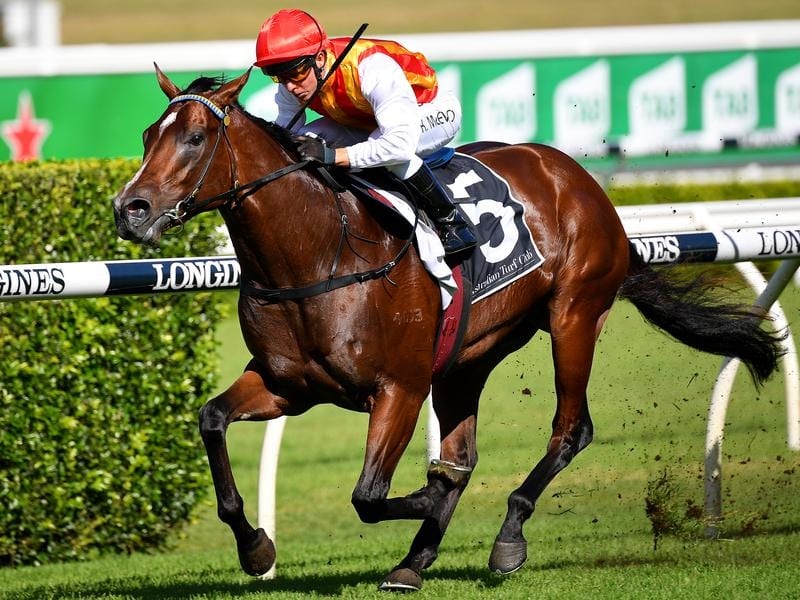 Peltzer will contest his second $1 million race of the spring when he lines up in the Bondi Stakes but this time trainer Gerald Ryan expects a different result.

The colt finished fifth to Ole Kirk in the $1 million Golden Rose at Rosehill two starts ago, that horse subsequently franking the Sydney three-year-old form by claiming the Caulfield Guineas.

Peltzer has also been back in the winner’s circle, leading throughout in the Stan Fox Stakes last start to secure his place at the top of Bondi Stakes markets.

In doing so, he maintained his perfect record at Randwick where he is undefeated in three starts.

While Ryan says no race is easy to win, he expects Peltzer to justify his favouritism at his pet track on Saturday.

The trainer’s confidence is due, not only to Peltzer’s liking for Randwick, but also a recent epiphany.

After his Golden Rose defeat, Ryan didn’t feel the horse was at peak fitness despite three tough, conditioning runs.

So he stepped up his training and the result was a Group Two win.

“Seven starts, you should know how to train them but he was always pulling up bigger than what I thought he should have,” Ryan said.

“So I started working him harder and he looks better since.”

Ryan has again increased the tempo leading into the Bondi Stakes and says Peltzer has continued to thrive.

However, the 1500m of the Stan Fox was a distance test for the three-year-old and he will face another when he extends to a mile for the first time on Saturday.

Again, Ryan is unperturbed and says the colt has been strong enough at the end of shorter races to give him the confidence he can run the journey strongly.

Nor is he fazed if Peltzer does not dictate, despite three of his four wins coming when he has led.

Tim Clark stays in the saddle after winning the Stan Fox at his first ride on Peltzer.

Jockey and trainer have enjoyed great success over a number of years, particularly in second-tier races and Ryan would love to secure his services more often.

“I’ve had a lot of luck with Tim. I think Tim is a very good rider,” Ryan said.

Ryan will also be hoping Clark is a Bondi Stakes-winning jockey come Saturday.