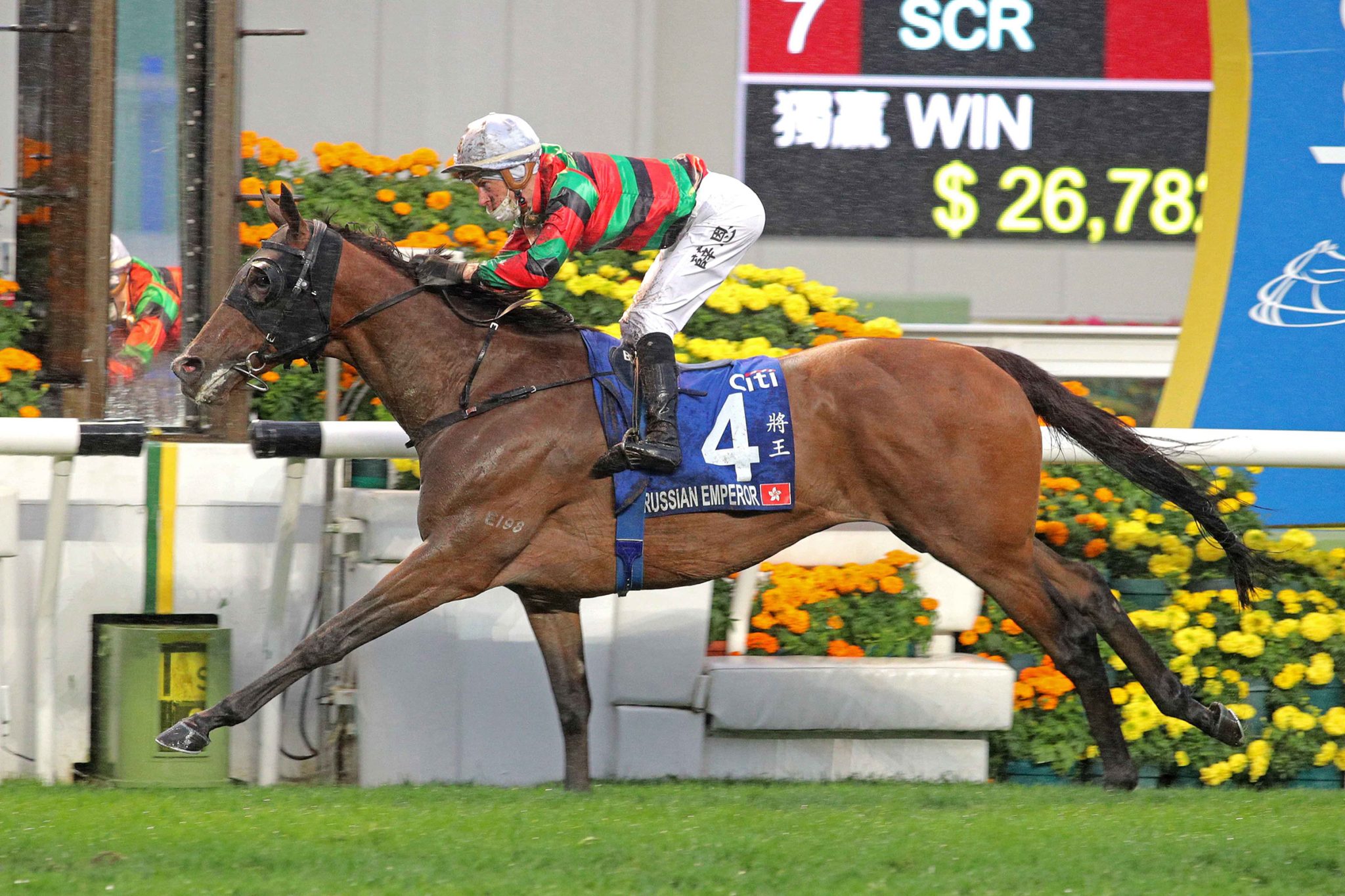 A pair of confidence-boosting track gallops has left Douglas Whyte confident Russian Emperor has fully recovered after a valiant last-start second to Golden Sixty and is now poised to assert staying superiority in the Group 1 FWD QEII Cup (2000m) at Sha Tin on Sunday (April 24).

The imperiously-bred gelding was reported to have exhibited lameness in his nearside hind leg after finishing second to Golden Sixty in the Group 2 Chairman’s Trophy (1600m) at Sha Tin on April 3.

Whyte, who rode Russian Emperor in work last week, says the five-year-old has rebounded well from the issue following his run earlier this month and was pleased with his final turf gallop at Sha Tin on Tuesday (April 19).

“I was happy with the way that he went, he’s bounced back to the Russian Emperor we know and now he’s had his final turf gallop, that will be him done ahead of the race,” Whyte said after piloting his flagbearer over 1200m in a leisurely 1m 27s (31.7, 30.5, 24.8) with stablemate Turin Redsun as company.

“He feels good, he feels fresh, he feels back on track. He did pull up slightly off behind after his last run, but he’s over that and I’m just happy that he’s pulled through and he’s back on track.”

Placed in six of nine runs this preparation, including a gallant second to Russian Emperor in the Group 1 Citi Hong Kong Gold Cup (2000m), Savvy Nine continues to thrive for Whyte.

“He’s flying. He’s in a rich vein of form at the moment and he’s loving life, loving Hong Kong and loving being competitive – he’s a bundle of health at the moment,” Whyte said.

While Whyte, with 26 wins so far for the season including two Group 1s, does not have a contender in the FWD Champions Mile (1600m), which is crowned by the presence of Golden Sixty, Waikuku and California Spangle, he fields Stronger in the Group 1 Chairman’s Sprint Prize (1200m).

The diminutive chestnut notched his first win at elite level with Group 1 Centenary Sprint Cup (1200m) success on January 23, but failed to flatter when eighth to Wellington – once more the leading contender on Sunday – in the Group 2 Sprint Cup (1200m) at Sha Tin on April 3.

“I was a little bit disappointed with his last run. I’ve watched the race a few times and there are probably a few reasons for that performance,” Whyte said. “But he’s an honest horse that thrives and he lets you know when there’s a problem and, thankfully, he hasn’t got any problems at the moment.

“I expect him to improve on his last run.”

Stronger worked over 800m on Monday (April 18) at Sha Tin on the turf, clocking 50.2s (26.3, 23.9) in preparation for the clash against fellow Group 1 victors Wellington, Hot King Prawn and Sky Field in the HKD$20 million test.