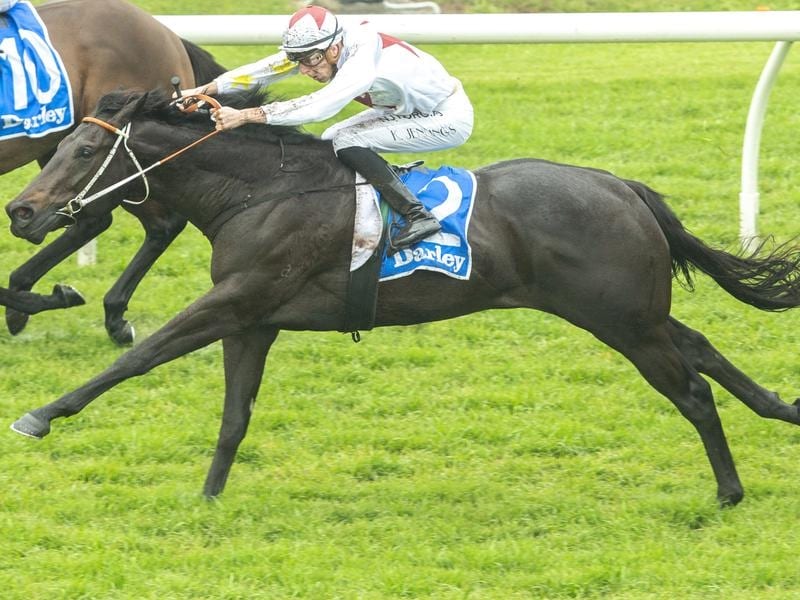 Hawkes Racing colt North Pacific has rocketed into Golden Rose favouritism with a stunning victory in the Group Three Up And Coming Stakes at Randwick.

Bookmakers reacted immediately to his thumping 5-1/4 length win on Saturday, the TAB winding him in from $11 to $3.50 to depose Golden Slipper winner Farnan at the top of markets.

Winning jockey James McDonald struggled to contain his enthusiasm for the colt, whose only defeat was a debut third to Farnan in the Silver Slipper.

“Can I go around again?” McDonald quipped on return to scale.

“The Hawkes stable have always had big wraps on him and I still believe there is a bit to come, I suppose they do too.

“They do a wonderful job with these colts and he is no exception.

“He oozes a lot of class, he swaggers around the arena and then canters down off the bridle, executes brilliantly and wins like that. It’s pretty nice.”

McDonald settled North Pacific ($1.85 fav) midfield and the splits appeared at the right time for the three-year-old to surge to the front and quickly put his rivals to the sword.

Bazooka ($26) reacted well to the removal of blinkers to grab second with Marsannay ($11) another short neck away.

Team Hawkes have a reputation as stallion makers and North Pacific, an $800,000 yearling purchase by Brazen Beau, fits the bill.

Co-trainer Michael Hawkes confirmed the colt, raced by Orbis Bloodstock, was likely to go straight into the Golden Rose (1400m) on September 26 without another run.

“This is a stepping stone and he will probably go to the Golden Rose next,” Hawkes said.

“We kept him fresh and it was five weeks between runs into today.”

Hawkes Racing has enviable depth in its three-year-old ranks with both Doubtland, also raced by Orbis, and Ole Kirk in contention for the better races.

The trainers plan to keep their colts apart for as long as possible but Hawkes says they will almost certainly clash at some point.

“When you have the colts that we have, Ole Kirk, Doubtland and this bloke, you try to separate them and try not to compete,” Hawkes said.

“If they end up clashing in a Golden Rose or Caulfield Guineas or whatever races we are targetting with them, sobeit.”

North Pacific has been entered for the Caulfield Guineas and Cox Plate and firmed in markets for both races while his price for The Everest also shortened.