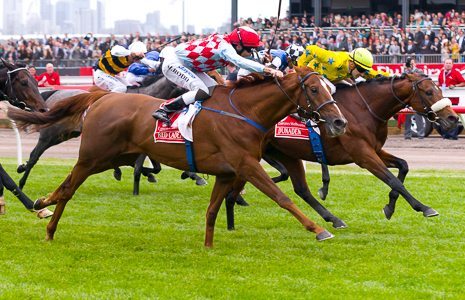 Red Cadeaux is going around this weekend at Kempton (in Great Britain) in the September Stakes. Trainer Ed Dunlop is taking it one race at a time with his old mate. The eight year old gelding deserves a life eating oats and running around the paddock but let’s hope that the grand old champion makes it down to Australia for one final run and who know; he might even go one better than his two previous second place finishes.

Red Cadeaux,currently $41 with Sportingbet to take out this year’s Melbourne Cup., could be compared to another amazing old time “red” in Essendon’s AFL star Dustin Fletcher; Age doesn’s seem to weary some champions. In 2011 Dunaden won the cup but to the naked eye it looked as if Red Caudeux had gobbled him up on the line at 50/1. Last year (2013) Fiorente was in a different class but it was Red Cadeaux who was there to run 2nd this time at 60/1. If you have been a fan of Red Cadeaux (and backed him each-way in the Cup) you would have a photo of him above your mantlepiece.

In between those two runs he managed to win the Hong Kong Vase at Group One level and ran second in the Dubai World Cup at Group One level. As you can see the Ed Dunlop trained eight year old gelding has certainly paid for his hay over the years.

He has been a good horse in Great Britain but it’s been on the road where he has done his best work. It’s crunch time now for the old campaigner as connections decide if he is going to pack his bags for one last tilt at the greatest staying test of them all. He had a decent hit out last month where he ran fourth at Newbury at Group Three level and he will contest the 1 mile 4 furlong Group Three race at Kempton this weekend.

“It really was make or break last month when he ran in the Geoffrey Freer Stakes at Newbury, but he showed so much of the old spirit when not beaten far in fourth”, said trainer Dunlop.

“He has been in good order at home since and he goes to Kempton for the September Stakes. After that we have to decide whether to prep him for the first batch to go into quarantine for another crack at the Melbourne Cup.”

The well bred son of Cadeaux Genereux will have plenty cheering him on at Kempton in the hope that he graces us all with his pressence in his fourth go at the Melbourne Cup. It comes as no surprise this sentiment was shared by VRC Acting Chief Executive Julian Sullivan who summed it up perfectly;

“Like the Cup, Red Cadeaux is an international success story, racing around the globe each year, and for him to win the race would be a fairytale result for the sentimentalists.”