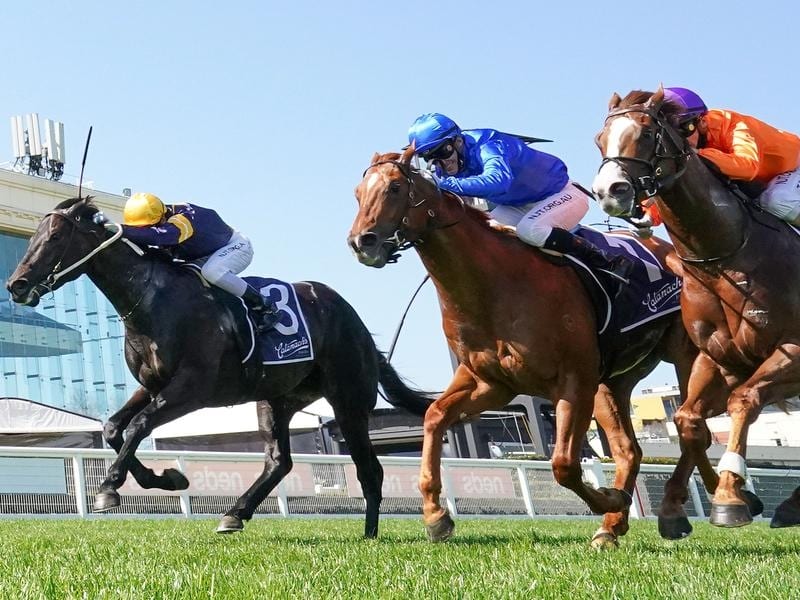 It was only a three-horse field but it produced one of the great spectacles of the year when little separated a trio of colts in the Group Three Blue Sapphire Stakes.

In a slogging finish to the 1200 metre race, there was only a neck between first and third and it was the rank outsider Ranting, who at one stage looked to be dropping off the other pair, who proved too strong.

In the early part of the straight Hanseatic got the better of Anders on his inside but both continued to fight to the line.

Ranting, ridden by Ben Melham, was on their outside and overhauled the pair in the closing stages.

Winning trainer Troy Corstens said he was amazed that Ranting got the verdict as he had a tough three-wide run.

“I thought he was going to (finish) a bit disappointing but he took that time to really balance up,” Corstens said.

“I love the way he ran through the line.”.

The win gave the son of Zoustar his first victory in six starts.

It also continued the great run of the Leon and Troy Corstens stables which also claimed the Thoroughbred Club Stakes with Swats That on Saturday.

Melham said Ranting was suited by the tooth-and-nail battle which ensued from early in the straight between Anders and Hanseatic.

“They got away from me a little. I let him drift a bit in the straight away from them and he was too strong late,” Melham said.

“It was no surprise to me that he won today. Onwards and upwards for him.”

Second placegetter Hanseatic was later found to have bled from both nostrils and will be suspended from racing for three months.

Mark Zahra said Anders was disappointing but he didn’t expect to be challenged so early in the race.

He said Luke Currie aboard Hanseatic giving him little peace set the race up for Ranting.