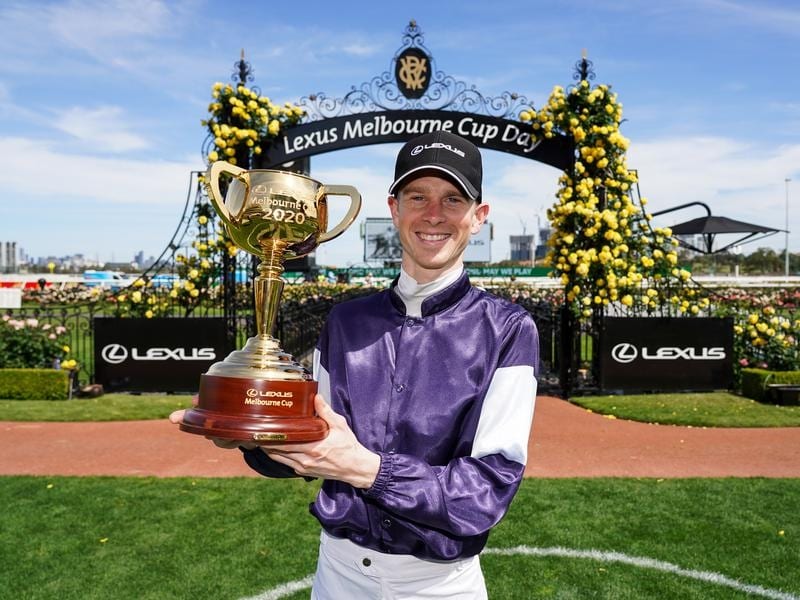 Becoming a Melbourne Cup-winning jockey at the age of 25 is still sinking in for Jye McNeil after a restrained night of celebrations.

McNeil became the toast of Australian racing with his daring front-running ride to win the two mile feature on Irish-trained raider Twilight Payment on Tuesday.

One of the rising stars in Melbourne’s jockey ranks, McNeil says the win still feels surreal.

“I have to keep telling myself and pinching myself but I’m sure it will sink in over the space of today,” McNeil said on Nine’s Today show on Wednesday.

“I’m just enjoying the moment for now and I’m just so grateful to be holding this Cup.

“It means the world. It’s something that we as jockeys really work towards our whole career and I feel very grateful it has happened to me.”

The jockey celebrated his memorable win at home with his partner Jess Payne and infant son Oakley, along with some close friends.

There were the post-Cup media rounds to attend to on Wednesday, ahead of preparations for his seven rides at the VRC Oaks meeting at Flemington a day later.

The worldwide pandemic has given the Cup carnival a different ambience this year with only trainers, jockeys and necessary workers allowed on track, leaving the usually thronging grandstands silent and empty.

But not even the tempered atmosphere could detract from McNeil’s thrill in winning Australia’s most famous race.

“It’s certainly different but it’s something we’re getting used to now because it has been like it for quite a while,” he said.

“But the emotion of winning the Melbourne Cup overwhelmed me and that was enough for me.”