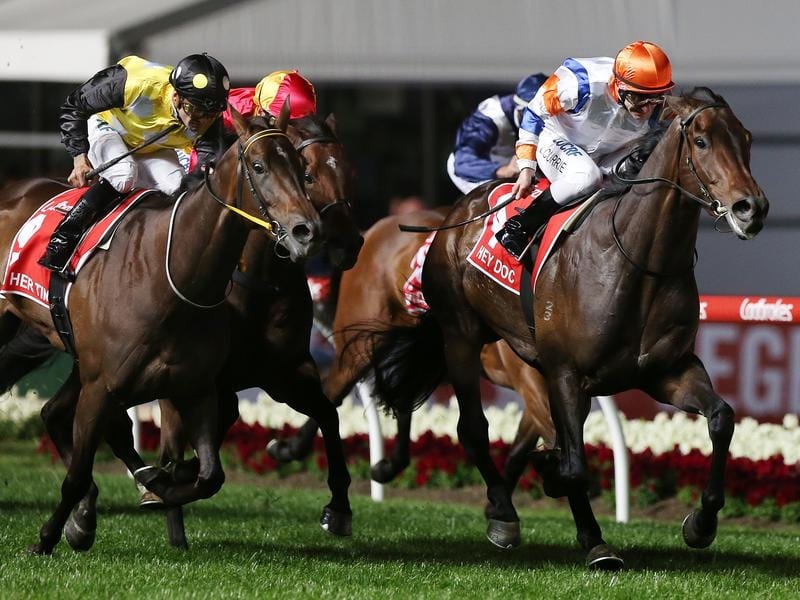 Tony McEvoy is investigating different scenarios for a trip to Dubai with Group One winning sprinter Hey Doc.

McEvoy, who trains in partnership with his son Calvin, said the Group One Al Quoz Sprint over the straight 1200m on World Cup night, March 28, was a possibility for Hey Doc.

But McEvoy wants a companion for Hey Doc should the gelding head to Meydan.

“It’s important when he goes there he can have some friends,” McEvoy said.

“I remember when I was very green taking Fields Of Omagh to Japan for the Japan Cup.

“He was the only horse from Australasia and we got up there and he was in a 40-horse barn, on his own and the old boy just fretted.

“I’ll be making sure that doesn’t happen with Hey Doc.”

McEvoy said his understanding is Hey Doc can fly straight to Dubai and undergo 48 hours quarantine and then be right to race.

But getting him back to Australia is more involved.

“I like the idea of Dubai but I’m just trying to get my head around the quarantine situation,” he said.

“Going there is all right, it’s how we get him home.

“I don’t want to have to go through England to get him home, so there’s still a little bit to unfold yet.”

Hey Doc is scheduled to have a jump-out at Werribee on Tuesday with the Australia Stakes (1200m) at The Valley on January 24 his next mission.

It will be Hey Doc’s first appearance since giving the McEvoys their first Group One win as a partnership in the Winterbottom Stakes at Ascot in Perth on November 30.

McEvoy said Hey Doc went straight back to the Flemington stable after his trip to Perth.

“He’s a horse that actually does better at Flemington than in the country, surprisingly,” McEvoy said.

“I’ve currently got him in this holding pattern and I just want to keep him stimulated.

“He’s been going to the beach and doing a few different things so I thought we’d take him out to Werribee, have a cruise around and give him a day out.”