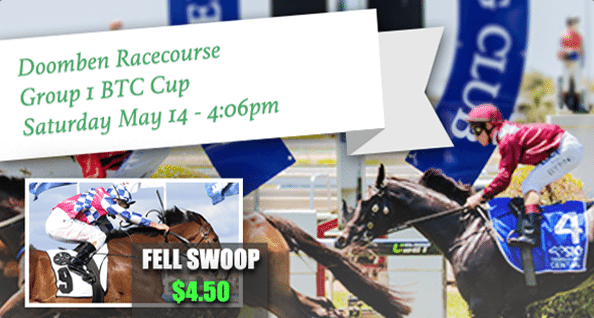 THE Queensland winter carnival kicks off this Saturday with the Group 1 $500,000 BTC Cup at Doomben.

The BTC Cup is one of the main highlights of the carnival and it has been won by some of Australia’s best sprinting stars of the past. Names such as Apache Cat, Duporth, Hot Snitzel and the great Black Caviar in 2011.

Black Cavair won at odds of $1.14, but punters can get much better odds this year with an even field of 14 runners lining up. Fell Swoop is a popular betting choice after winning its last start and finishing second behind Chautauqua two starts back.

The BTC Cup has been a race for favourites and the Chris Waller-trained Japonisme will likely carry that tag. The last start Arrowfield Stud Stakes winner is the $4 favourite at Crownbet.com.au where punters get money back (up to $50) if their horse finishes second in the BTC Cup.

Divine Centuri has been divine so far with three wins from five starts. The Stuart Kendrick-trained filly scored a solid win in the Mick Dittman Plate last start and that form should hold up. It is sired by I Am Invincible which are running very well over the short-course distances and it looks a strong chance at $3.80.

Secret Saga brings the class to the race with five wins from 11 starts. All five wins have come at Doomben, which included the Mode Plate three starts back. It showed a great turn-of-foot last time out and considering it has won second up in the past, it will be a threat with Blake Shinn in the saddle at $3.40.

Wicked Intent is a former top liner which has been mixing its form of late. The Chris Munce-trained colt is having its 15th run as a three-year-old and that experience could give it an edge. It has won four from six at this distance and although it didn’t fire in the Mick Dittman last start, expect improvement at each way odds of $12/$3.80.

Another Whiskey gave its supporters another reason to drink after scoring back-to-back victories. The Steele Ryan-trained gelding won both in Class 6 and it never looked like getting beaten. It won by 2.3 lengths at Doomben on March 26 before winning by 1.8 lengths at the Sunshine Coast on April 23. Will be a big threat to the favourite from the inside draw at $5.50.

Talented gelding Inz’n’out has won only four times from 16 starts, but it also has 10 placings and that consistency has rewarded punters throughout its career. The Gerald Ryan-trained gelding finished close up behind Furnaces at Hawkesbury last start and the form in behind the likes of Good Project, Religify and Howmuchdoyouloveme should stand up. Bookmakers aren’t being generous with only $1.75 on offer.

Lady Jetsetter made some late ground at Doomben last start and it comes right into calculations if the rain comes. It has won three from four on rain-affected ground and apprentice jockey Sairyn Fawke gives it a 3kg claim. Outside chance at $21.

Elegant Composure will bring plenty of attention to racegoers as it’s looking for its seventh consecutive win from as many starts. The Chris Anderson-trained mare hasn’t been running exceptional times, but we can’t fault an unbeaten streak of six and it will be very tough to beat. Bookmakers opened it up at $3 and punters have already backed it into $2.80.

Desert General is a four-win gelding which hasn’t won since October, 2015, but it has gained plenty of support with bookmakers. The Liam Birchley-trained gelding is currently priced at $5.50 and after four win-less runs this campaign, some punters might think it’s due. We think it has a winning chance, but those odds are too skinny for our liking.

Ruling Force is an experienced five-year-old which has enough ability to cause the upset. It has won 10 from 43 starts in a busy career and five of those wins came at this distance. Brooke Stower takes 2kg off its back and it’s not the worst chance at odds of $12.

Sir John Hawkwood is the current second favourite at $4 following a third placing in the Sellwood Stakes last start. The David Vandyke-trained gelding has come of age this preparation with two victories and it will get an economical run from the inside draw. It likes to right and the small field plays right into its hands.

Real Love was a tragedy beaten last start when second behind Doctor Care at Caulfield. The former Perth star is now with champion trainer Darren Weir and it has the ability to easily beat a field of this quality. It raced three wide throughout last start and still found a kick in the straight. Bookmakers are keeping it safe at $3 which looks a fair price.

Astronomos was a popular runner last preparation and ran as the favourite in the Newcastle Cup. It resumed with a slashing second placing at Doomben last start and the statistics are in its favour for this run. It is undefeated in two runs at this distance and in two runs second up, so it will be ready to fire and the only question is whether or not it can cope with this class. It could be a horse for the future, but the $5.50 is too short.

Souchez has the form on the board with two wins from three starts. The Godolphin colt won well on debut at Rosehill before placing in the Skyline Stakes at Randwick. Punters jumped on board last start in the Pago Pago and it found enough to score the narrow win. Has to be respected in a tough field at $5.50.

Tony Gollan will be hoping his horses make it to the track this week as he lines up the current $2.20 favourite Tiyatrolani. The two-year-old filly is unbeaten in two starts and the wins have been devastating. It won by 7.5 lengths on debut at Ipswich and it led all the way at Doomben last start, winning by 4.3 lengths. Tough to beat from the inside draw despite it drifting in the market.

Nikitas is fresh up off a spell after running second behind Capitalist in the Magic Millions. The Kelso Wood-trained colt won by 4.8 lengths on debut and it hasn’t done anything wrong since. The son of Snitzel has plenty of speed and a win wouldn’t surprise at $6.50 after opening at $6.

Jumbo Prince has been expensive for punters of late, having run at odds of $3.60, $6 and $7.50 for only one placing. The four-year-old, to its credit, hasn’t had any luck of late and getting the inside barrier might see a change in tactics. It gets too far back and relies on luck to win, so expect a more forward position and a chance of winning at $4.80.

Lordag is a consistent gelding which has placed in four of its last five starts which also included a win at the Sunshine Coast. it showed good heart last start at Doomben when going down by a nose behind Gotyacovered and a similar effort will take it close. Well weighted and bookmakers have it as the favourite at $4.20.

Brettan is a value runner at $15 after beating Astronomos last time out. The Dough Roberts-trained gelding caused the upset at $19, but it has always shown ability and it’s over the odds once again. It loves this distance and it could sneak into the minor money at $4.60 for the place.

Fell Swoop is a quality gelding, but the market drift is concerning. The nine-time winner from only 14 starts opened at $4.20 and has drifted steadily to $4.50. Drawing barrier 10 might have something to do with it, but it looked special winning the Victory Stakes last start and it ran the globetrotting champion Chautauqua to within 1.5 lengths in the Group 1 T.J Smith.

Money has been steady for the Chris Waller-trained Japonisme which held off all challengers to win the Arrowfield Stud Stakes at Randwick last start. The son of Choisir possesses plenty of ability and it has only taken on the very best this season. It opened at $4, drifted to $4.20, but has since come back to its original price. Looks tough to beat.

We’re not sure what to make of Malaguerra’s run last start, but the bookmakers are keeping it safe. The Lee and Anthony Freedman-trained sprinter had a picket fence form line heading into the All Aged Stakes last start where it finished sixth, but it didn’t have much room to move and that run can be forgotten. Whether or not it’s up to this class is the big question, but $6 for a runner of its potential is good.

Cylinder Beach flew home last time out in the Gunsynd Classic and a repeat performance could be on the cards. The three-year-old has won and placed twice on this track and its best performance to date was a fourth behind Press Statement in the J.J Atkins. Plenty of class about this one and the $3.80 will likely shorten.

Former New Zealand runner Mackintosh was well picked to win last start and it did the job easily. The three-time winner defeated a subsequent New Zealand Derby placegetter in Raghu and although it showed nothing in the Group 1 Randwick Guineas, that race came a bit too soon for it. Huge chance at $4.

Trafalgar was only fair last start, but expect a better performance now and bookmakers haven’t forgotten about it. The Chris Waller-trained runner is $6 with Sportsbet and the in-form Jason Collett takes the ride. He is producing more consistency at the higher levels now so keep his rides in mind.