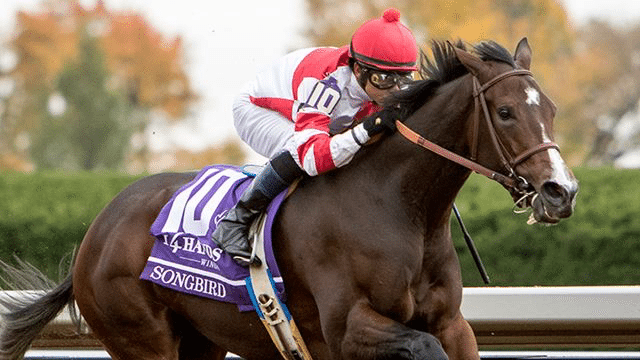 FUTURES punters can bet on a variety of horse racing options, which now include both the Kentucky Derby and the Kentucky Oaks.

The Oaks is run on May 7 and has already gained worldwide popularity thanks to one classy filly which is making headlines.

Punters have been singing the praises of three-year-old filly Songbird, which has looked a potential superstar in six career starts to date. The daughter of well-known sire Medaglia D’Oro is undefeated with an average winning margin of 5.25 lengths.

Three of those wins have come at the highest level in the Del Mar Debutante Stakes, Chandelier Stakes and the Breeders’ Cup Juvenile Fillies. It has won by a combined margin of just over 32 lengths and it has been as short as $1.05 in two races so far.

Australian fans can get $1.50 on Songbird for the Kentucky Oaks, which looks good value for horse racing multi-bet punters. Songbird will run this Saturday in the Santa Ana Oaks, where betting is available at Bet365.com.au, and trainer Jerry Hollendorfer is expecting the race to be a procession before heading to the US$1 million feature in Kentucky.

“We just keep doing our job and hope she keeps doing her job and we might end up in some good places with her,” Hollendorfer said.

“We’ve already been to good places with her but we could get to more.”

On the home front, the ATC Oaks runs on the second day of The Championships where Jameka is the current $3.20 favourite.

The Ciaron Maher-trained filly finished second behind Tavago in last week’s Australian Derby and punters are believing it can go one better this week.

The daughter of Myboycharlie hasn’t won since winning the Crown Oaks at Flemington during the spring carnival and it has the class edge over most of the field which includes the likes of Happy Hannah, Honesta and New Zealand duo Capella and Valley Girl.

“Her fitness is quite good. She doesn’t take a lot of work during the week,” Maher said.

“She’s a clean-winded filly and a natural athlete.

“She looked better in the yard than she ever had last Saturday and I thought she did a great job.

“She ran into a smart Kiwi stayer.”

Chautauqua and Buffering to meet in Hong Kong

Buffering and Chautauqua are both coming off impressive wins on the world stage and the two will likely meet for a re-match in Hong Kong.

Buffering’s trainer Robert Heathcote admits Chautauqua is probably the best sprinter in the world, but he hasn’t conceded defeat in the upcoming Chairman’s Sprint Prize in Hong Kong on May 1.

Buffering is coming off a dominant win in the Al Quoz Sprint in Dubai and will head back to Australia before embarking for Hong Kong. The eight-year-old won’t be competing at Royal Ascot this year.

“It’s more that I don’t think it’s the best thing for the horse,” Heathcote said.

“He is eight years old and is enjoying this incredible journey and it was never planned at the start to go to Royal Ascot.

“Chautauqua proved on Saturday that he’s most probably the best sprinter in the world at the moment.

“But I don’t know about Tommy Berry’s comment that he has smoked Buffering every time he has met him.

“He beat us a long neck in the Darley and he beat is in the Manikato when Rich Enuff pulled Buffering apart in front. To say he has smoked us is a little generous.

“I am looking forward to a rematch in Hong Kong.”

Sportsbet.com.au currently has Chautauqua as the $2.20 favourite with rival Buffering at $10 for the win. Former Australian runner Not Listenin’tome has drifted out to $17 after its Dubai run.

Chautauqua’s chief owner Rupert Legh said his runner would push towards Hong Kong and he is confident about its chances.

“We are looking forward to it and he would probably go 10 days before the race,” Legh said.

“If he gets free galloping room, watch out, he’ll get you.

“And if he draws one or two, we’ll just see, let them go and let him not get caught up in anything and if he gets beaten like that, so be it.”

Jockey Michael Walker has suffered a head knock at home over the weekend. Walker suffered severe head injuries in a hunting fall in 2008 which has prompted a cautious approach to his latest injury scare.

Walker will miss the ride on both Criterion in the Group 1 Queen Elizabeth Stakes and Almoonqith in the Sydney Cup.

Walker’s manager Ryan Roberts said the brain scans were not conclusive, but he would visit the jockeys’ doctor on Tuesday for a further examination.

“He bumped his head and his initial scans were a bit unclear,” Roberts said.

Co-trainer David Hayes feels bad for Walker who only recently returned to riding, but his replacements are more than capable of taking over the reins.

“I haven’t had the chance to speak to Michael yet but I understand he has concussion and won’t be able to ride this week,” Hayes said.

“It is shocking luck for Michael as he was due to ride Almoonqith in the Sydney Cup and Criterion in the Queen Elizabeth Stakes.

“They are two big rides to have to miss particularly as both horses have been set for this race and I think they will be very hard to beat.”

Hayes confirmed that Hugh Bowman will ride Almoonqith and Tommy Berry will take over the ride on Criterion.

Almoonqith is on the fourth line of betting at $8 with CrownBet for the Sydney Cup with the Chris Waller-trained trio of Who Shot Thebarman, Libran and Grand Marshal dominating the market.