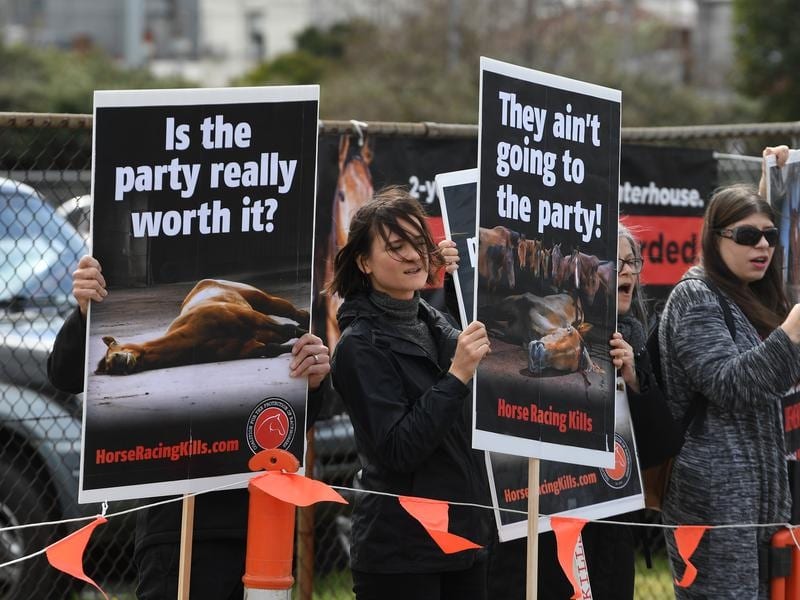 Animal activists are expected to make themselves known outside the racecourse where thousands of people will watch the Melbourne Cup unfold in the flesh.

The Coalition for the Protection of Racehorses has planned a protest outside Flemington racecourse on Tuesday amid the bustle of the “race that stops the nation”.

Two new drones will be used to monitor trains carrying more than 150,000 racegoers expected to take public transport to the event.

This is not the first time people concerned about the treatment of racehorses have picketed the $8 million Cup.

Coalition spokeswoman Kristin Leigh says the group has been inundated with support since ABC’s 7.30 program broadcast footage last month of racehorses being sent to a slaughterhouse.

“People are certainly waking up to the truth behind this industry. People can’t say they don’t know anymore,” she told AAP on Monday.

“If you’re going to the races this year and you saw 7.30, you are complicit in that animal abuse.”

Metro Trains and Victoria Police have spent $100,000 to tighten security for the race and help people arrive there smoothly.

More than 1000 extra train services will run to and from the racecourse, one every four minutes during peak travel times.