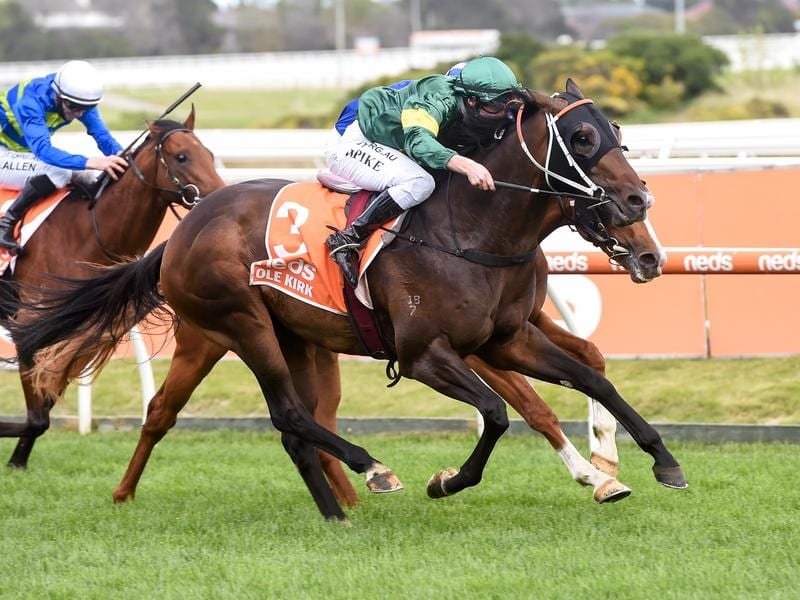 He is known as the ‘wizard from the west’ and Willie Pike showed why he has that moniker with a magical day at Caulfield which culminated in a Caulfield Guineas win on Ole Kirk.

After the victory, Ole Kirk’s co-trainer Wayne Hawkes proclaimed that the colt was the best three-year-old in the country.

The Guineas triumph gave Pike his fourth win for the day and his second Group One as he also captured the Caulfield Stakes on Arcadia Queen.

“Hats off to Willie. It’s not easy to win four,” Wayne Hawkes said.

“He’s like D Oliver. He was cool, he was calm, he was relaxed and he was on the best horse and got the job done.

“At the half-mile he had two options, go in, or go out, and as per usual he pulled the right rein.

“You have to get them right on the right day and you have to have the right bloke on top.”

Hawkes pointed out Ole Kirk’s outstanding pedigree and said he was the hottest stallion prospect in the land.

He said the three-year-old could head straight to stud if connections wanted to take that path.

Ole Kirk is by Written Tycoon, also the sire of Thousand Guineas winner Odeum, out of Naturale who is an unraced sister to Black Caviar and half-sister to All Too Hard.

Hawkes said Ole Kirk was one of the toughest colts he had trained.

It was co-trainer John Hawkes’ fourth win in the race and his third with his sons Wayne and Michael since they formed a partnership.

It was also the team’s 21st Group One win.

Pike was having his first ride on Ole Kirk and said he was confident before the turn but had to get going when Aysar charged around the field.

“I went in, and then I went out. It just took me a moment to gather momentum. Once he did he was strong through the line yet again,” Pike said.

Tagaloa was well backed to start a $4.20 equal favourite but he was the first horse beaten and was under hard riding with 800 metres to go.

Craig Williams said he eased him down as the horse wasn’t responding.